Take a deep dive into the illustrious backstory of the dive watch and discover the best options on the market today – fit for anyone looking to explore the oceans or simply hit the beach club.

These days, we take for granted that most sports timepieces are so high-tech as to be water-resistant – while measuring your heartrate and storing your emails to boot. But the first watches that could be worn near water were regarded as an astronomical leap forward in the industry.

In 1926, Rolex founder Hans Wilsdorf patented the Oyster case, featuring a screwed-down crown and case back which still ubiquitous today among dive watches. Since then, the iconic brand has had a proud history in underwater discovery, launching the Submariner in 1953 and the Sea-Dweller in 1967. Marine biologist Sylvia Earle, acknowledged as one of the pioneers of diving and who spent more than four decades as an ocean explorer, wears an Oyster Perpetual Lady-Datejust, which has accompanied her on expeditions around the world – to the Arctic and the Antarctic, to the Indian and the Atlantic Ocean, deep within the Pacific and aboard more than thirty submarines. 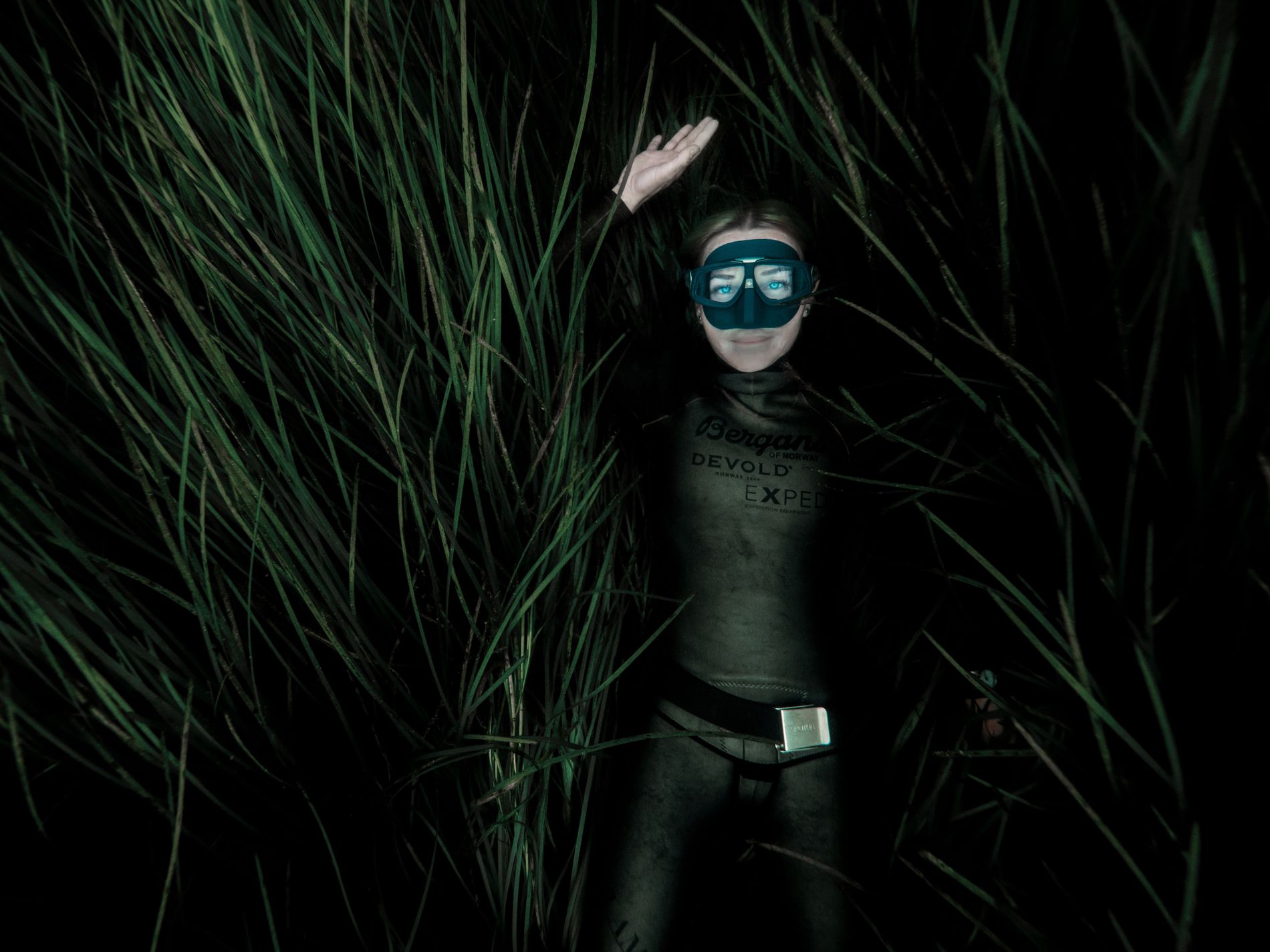 And it’s not just Rolex that has ventured into the deep blue sea with its creations. Panerai developed the patented Radiomir luminescence and, in 1936, created the Radiomir Prototype which, with its huge 47-millimetre case, was meant to be used as a tool on top of other diving equipment. In 1953, the same year that Rolex launched the Submariner, Blancpain released the Fifty Fathoms, which is water resistant up to 90 metres. Both featured some key design elements that would become essentials for dive watches thereafter, including a high contrast dial, good luminescence and a rotating bezel.

Related: The 9 best green watches to invest in

The French naval officer, ocean explorer, and co-inventor of the twin-hose underwater breathing apparatus Aqua-Lungdiver (which made it possible to explore parts of the ocean depths never seen before) Jacques Cousteau is also credited as a pioneer of diving watches, as he spearheaded the love for underwater sports. The Blancpain Fifity Fathoms was not only used by Israeli, Spanish, German and American special forces, but made famous by Cousteau, as he and the director Louis Malle both wore Fifty Fathoms while filming the award-winning underwater movie Le Monde du Silence in 1956.

Since then, many watch manufacturers have come aboard and now produce watches that can be used beyond even 300 metres underwater. While traditionally large in size, many diving watches are now offered in more moderate diameters – popular with anyone who prefers lounging at a beach club to exploring the depths of the ocean.

Below, we’ve rounded up the best.

Should Sylvia Earle ever choose to change her Oyster Perpetual Lady-Datejust for something more dive-appropriate, she might find the 37-millimetre Yacht-Master a great alternative. Made for seafaring on a yacht (as its name would suggest), the Yacht-Master is water-resistant to 300 metres. Made in a combination of steel and Everose gold, the Yacht-Master is a real looker, on or offshore. 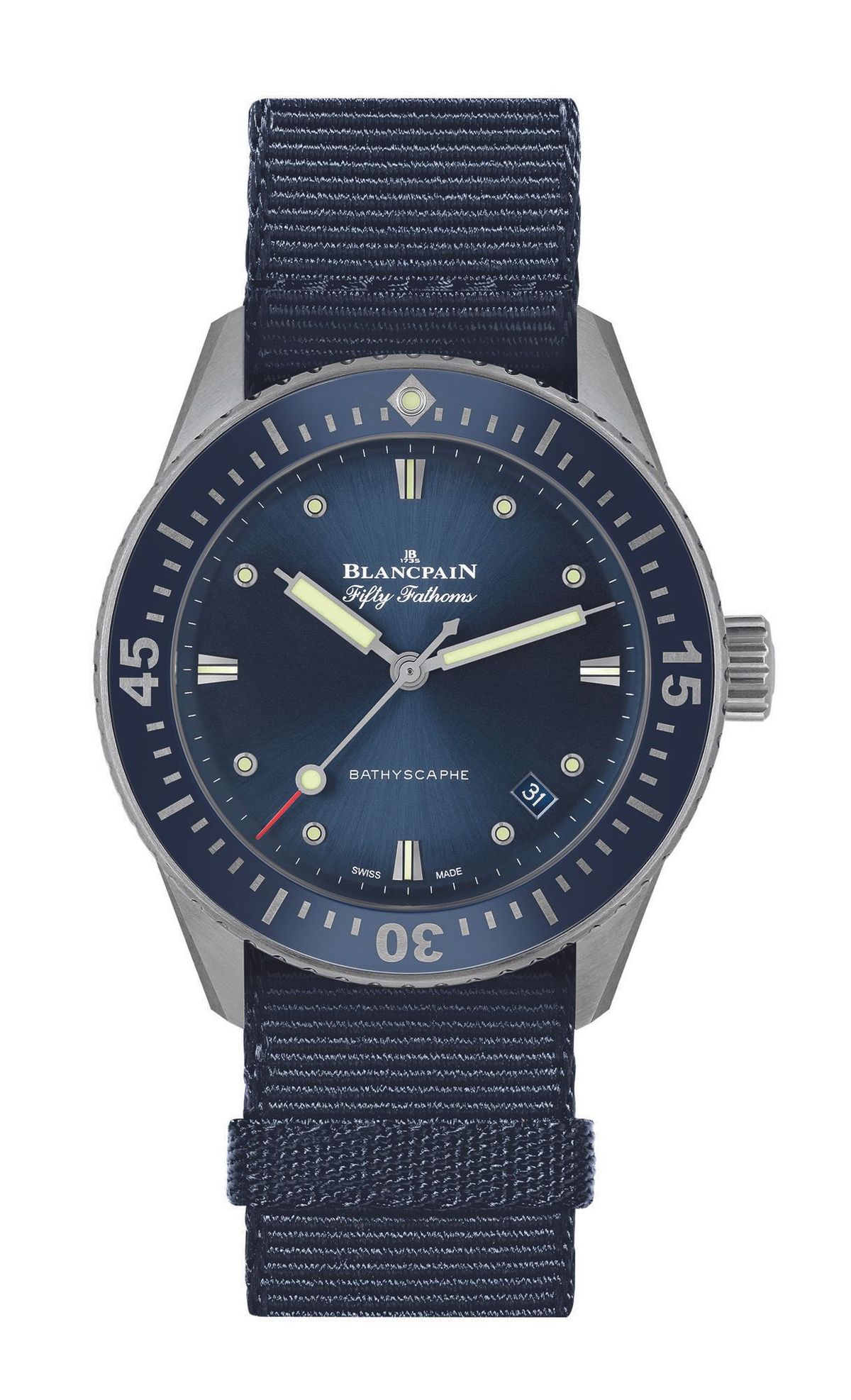 Used by military divers since 1953, the Fifty Fathoms still has a fiercely loyal following. The 38-millimetre Fifty Fathoms Bathyscaphe, with its blue dial and matching textile strap, is an excellent choice for women and would go just as well with a wetsuit as it would with a relaxed beach dress for post-swim cocktails. A diving watch can only be classified as such if it’s water-resistant up to at least 100 metres. Though the recently launched 38-millimetre Breitling Super Ocean Pastel may not look fit for a deep-sea diver, it meets this criteria while also featuring a turning bezel and a screw-down winding crown, making this the perfect choice for someone who favours ocean beds as well as sunbeds. 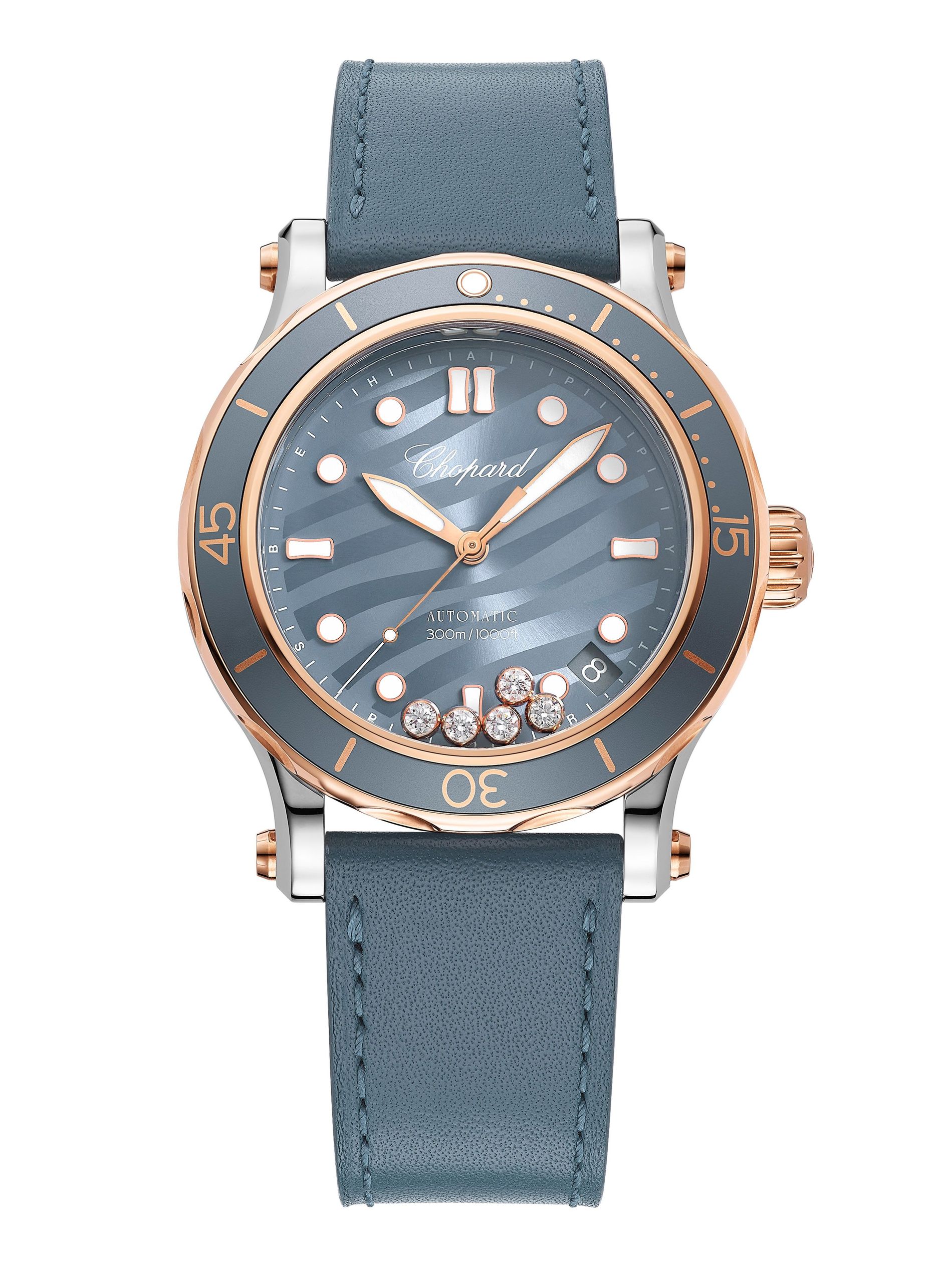 Chopard recently launched one of the most playful diver's watches on the market: the 40-millimeter Happy Ocean, which is water-resistant up to 300 metres and a stylish choice for holiday and city wear alike. The turning bezel and wavy dial add to the sporty look, and the five floating diamonds sitting in between the dial and the sapphire crystal add a touch of fun and glamour. 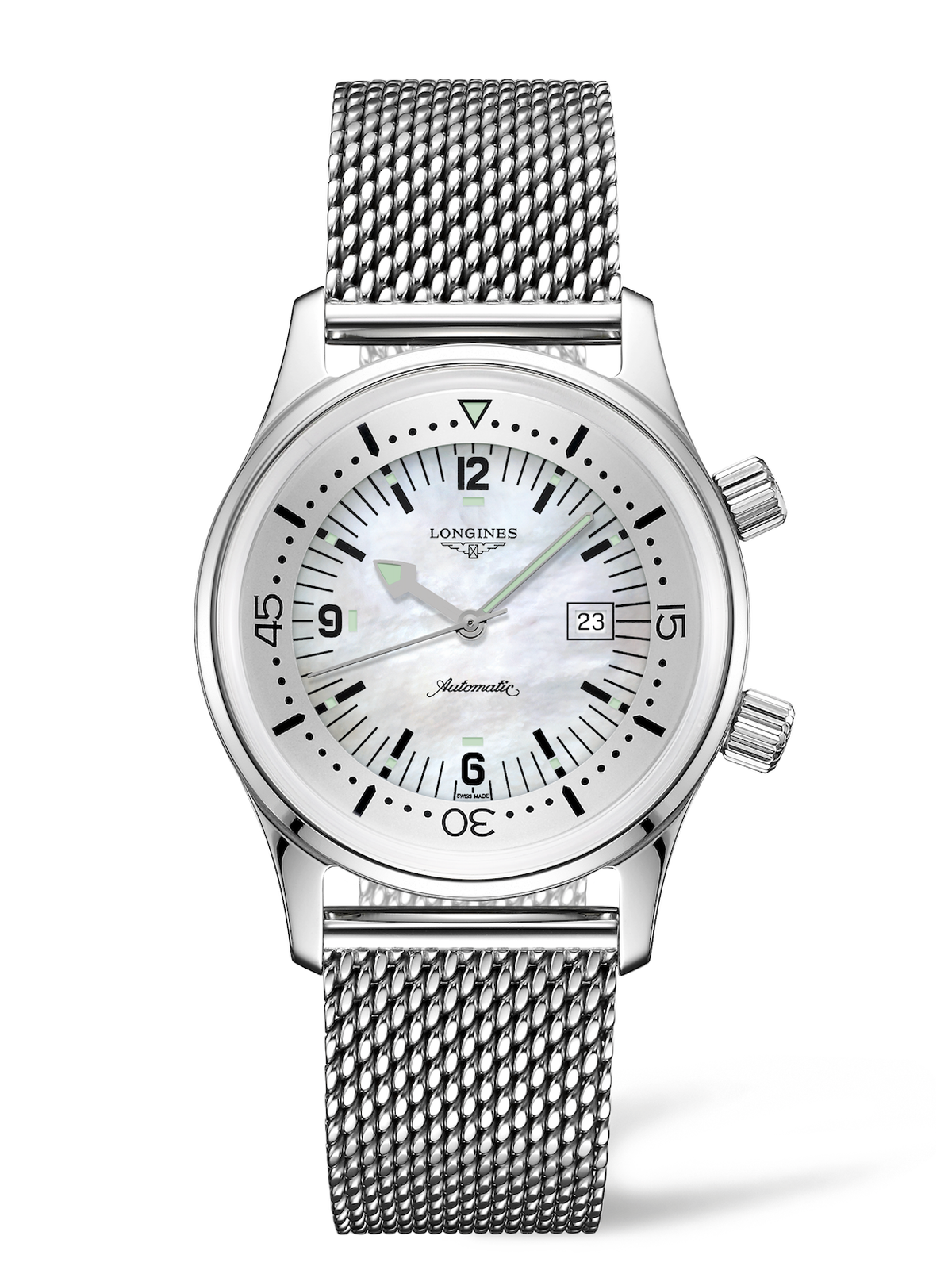 Well-known when it comes to sports and aviation pioneering, Longines celebrates its underwater history with the Legend Diver collection. Inspired by a diver’s watch from the 1960s, the Legend Diver was launched to fit a slender wrist with its diameter of 36 millimetres and white, mother of pearl dial. The Legend Diver is not just lovely to look at, but offers a water resistance of 300 metres.

TAG Heuer is is a wonderful choice for most occasions. The 36-millimetre Aquaracer Professional is a great example of a diving watch fit for more slender wrists, as well as those who are fans of sporty watches that aren't overly large. This one offers a stylish and slim profile, yet oozes a robust construction, not least due to the swatch-resistant bezel insert. 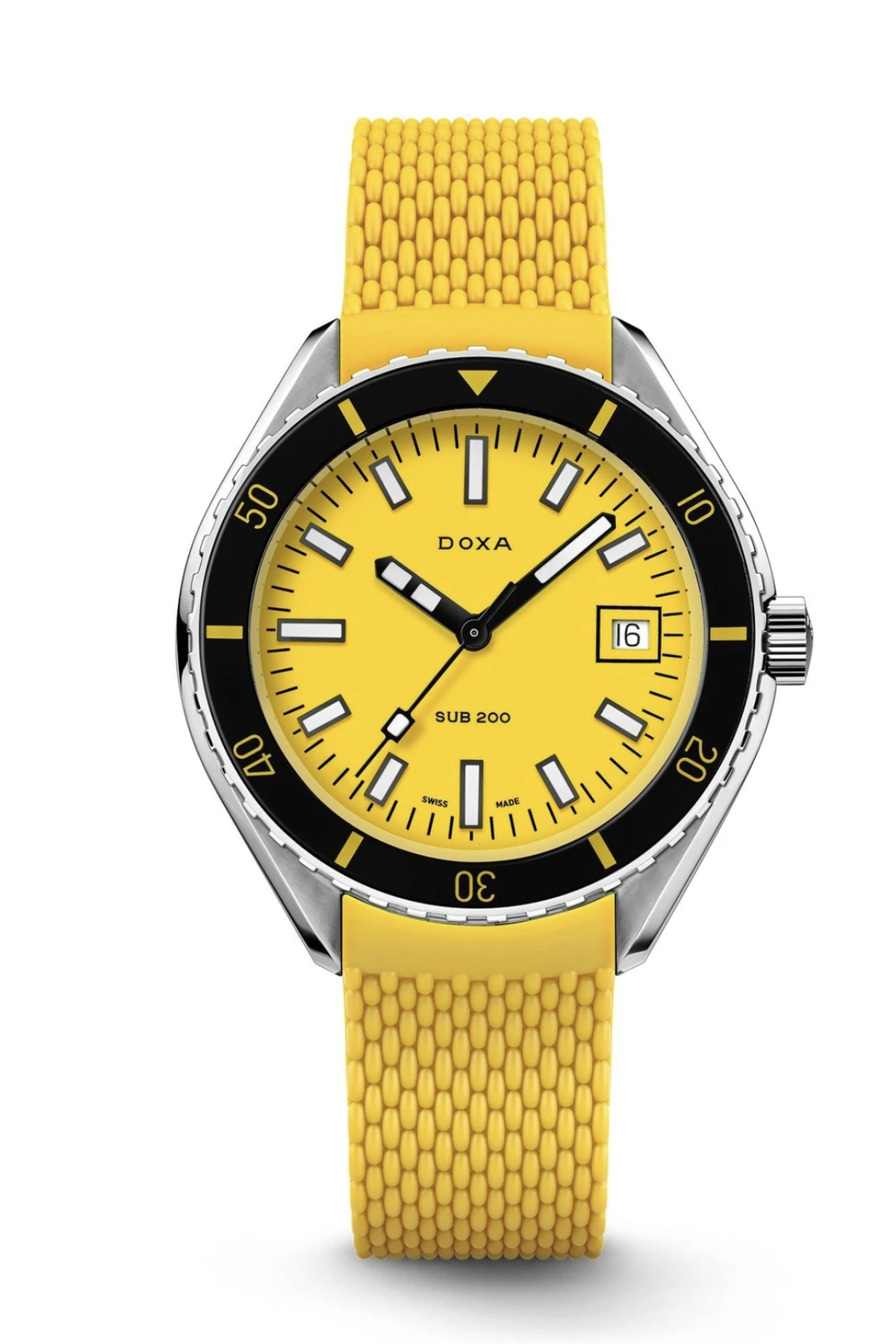 Doxa's SUB 200 Whitepearl with its bright dial and matching rubber strap is undoubtedly a stylish choice for any diver. The watch is water resistant to 200 metres and has a pedigree way below the ocean surface, the brand having proved its quality to divers for decades already.