Bonding over ski tours and sailing adventures is what cemented their future, but it was the tabletop dancing that really lit the spark. “Leo and I met when I decided to book a ski holiday with my friend,” says Ása Steinars, nature expert at Vogue Scandinavia and content creator. “Leo hosts ski events around the world and I showed up at one of them in Austria. After dancing on top of the tables at a ski party we started talking,” she says.

Leo Alsved, founder of The Ski Week and Vanlife Iceland, and Ása were both living and loving their lives when they met, travelling the world so much so that neither of them had a home base but this didn’t stop them from wanting to know more about one another. “In the beginning we did seven dates in seven different countries; we constantly travelled to spend time together and took turns in planning adventures,” says Ása.

Some of the couple’s early rendezvous include sailing in Croatia and living together in a van in Iceland. The couple quickly realised that we were inseparable, that they had both “found a soulmate,” and decided that they wanted to make it work, whatever it took. 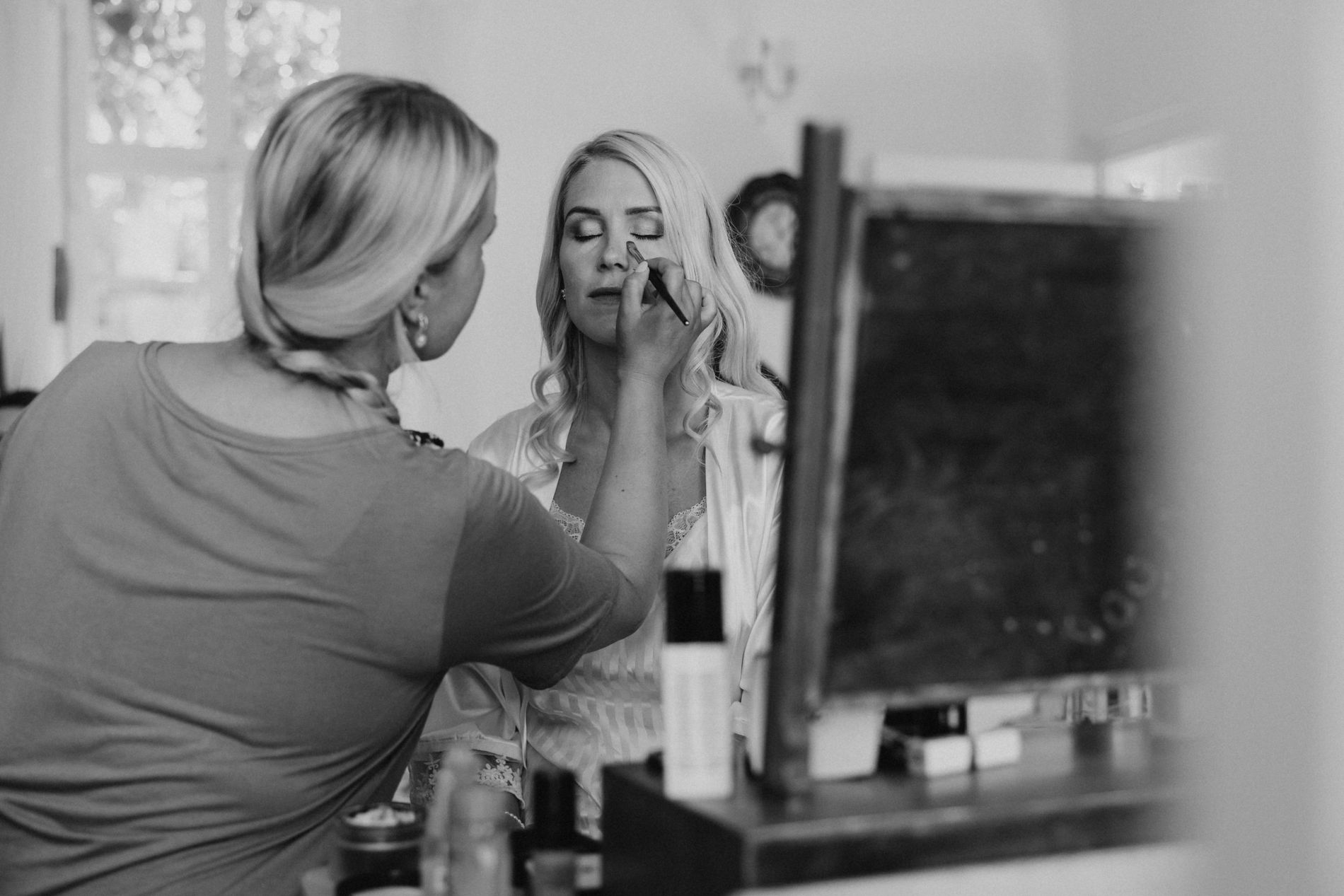 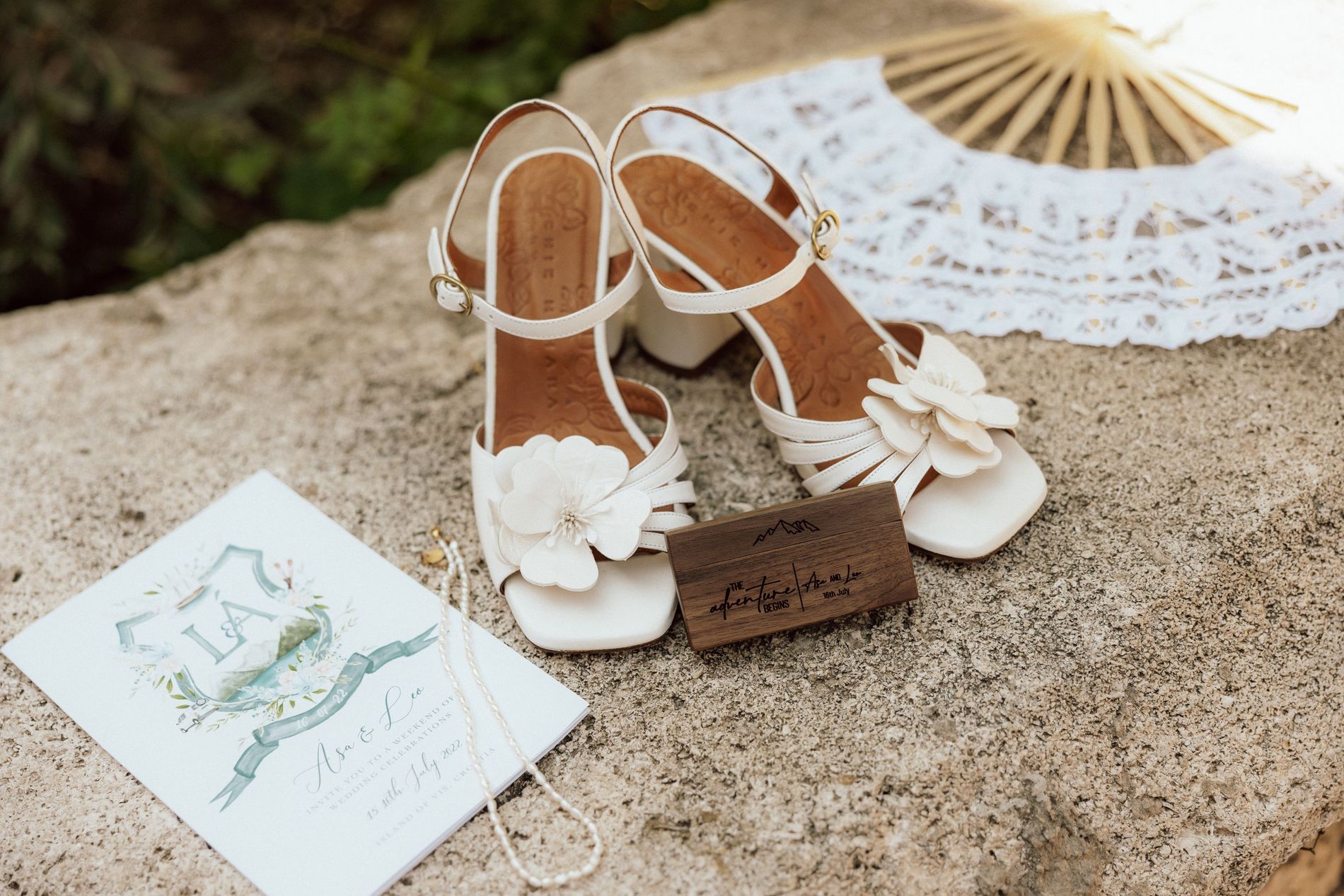 “We both remember a particular moment where we sat on a beach by a bonfire in the middle of nowhere in Greece under the stars,” says Ása. “That’s when we talked about how we could make this work; it was a magical moment, full of emotions. Shortly afterwards we booked around-the-world tickets together and then it felt like there was no turning back," she says.

"That year we celebrated New Years together in the Caribbean and at midnight we had ‘the talk’ and were officially a couple. It took us many months to reach that point, but we’re also happy that we took it slow in the beginning, just enjoying the thrilling and exciting time of getting to know each other.”

Fast forward to March 2020 and the now very much loved up couple travelled to the Philippines where Leo proposed to Ása on a secluded beach. “We kayaked out there to watch the sunset,” she says. “It was a calm evening and there was a perfect white sand beach. We were all alone and as the sun edged towards the horizon Leo went down on one knee and completely surprised me. I said yes, of course!" she says. 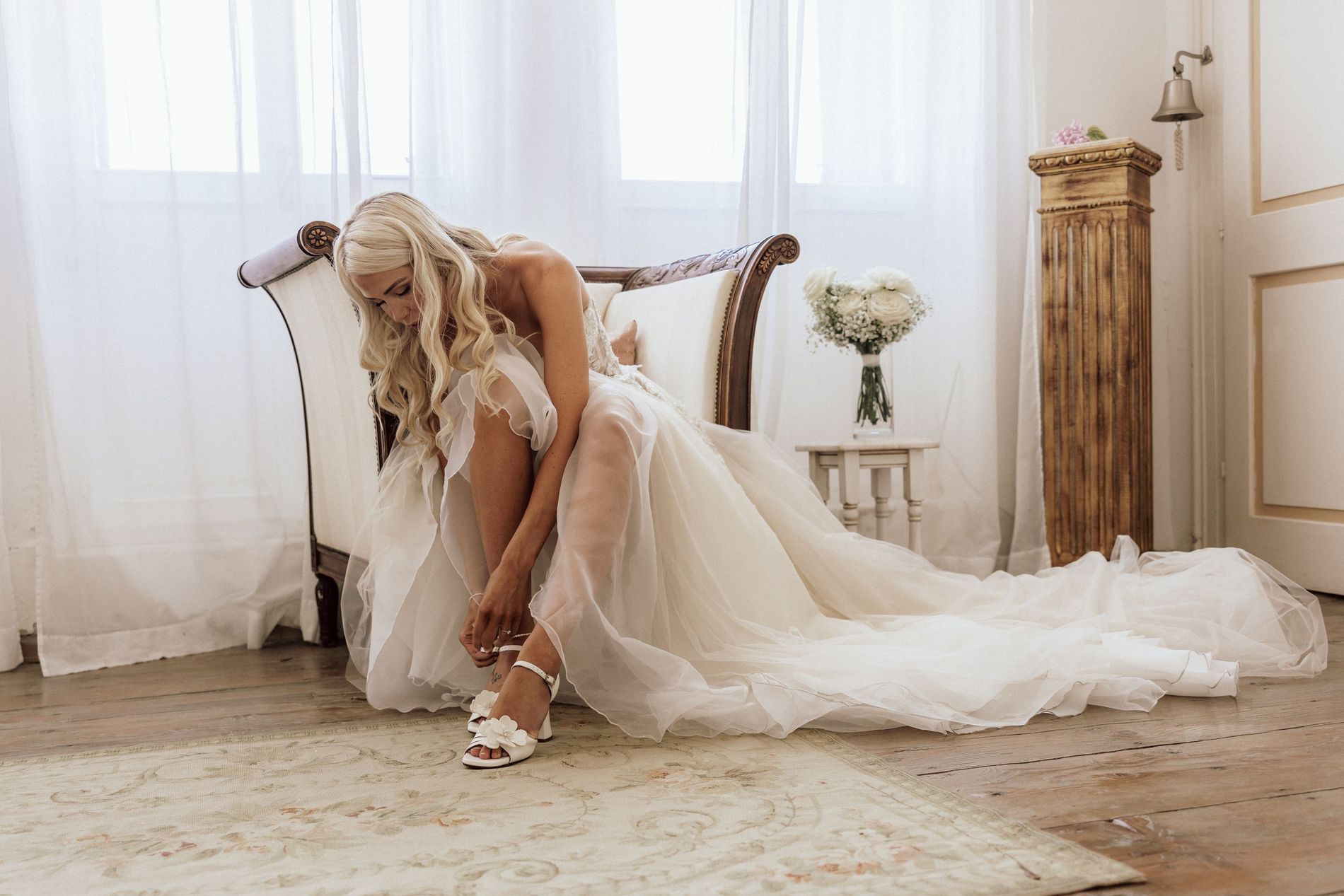 And by now, we all know what happened next: a global pandemic with lockdowns and travel restrictions aplenty. “It was strange to start planning a wedding [during this time], but we were optimistic that our time would come. It felt very special after years of isolation to be able to gather all the people that we love to one island this summer to celebrate love – for many it was their first big holiday after the pandemic,” says Ása.

One of the couple’s first dates was in Croatia, so it’s only natural then that Fort George on the beautiful island of Vis, play host to their summer wedding. “Croatia and the island of Vis are simply so special to us and every time we visit, we feel like we’re in one of the Mamma Mia movies,” says Ása.

The couple invited 120 guests to their week-long celebration. “Since many people were travelling far, we wanted to make the most of their trip and spend as much time with our guests as possible,” she says. 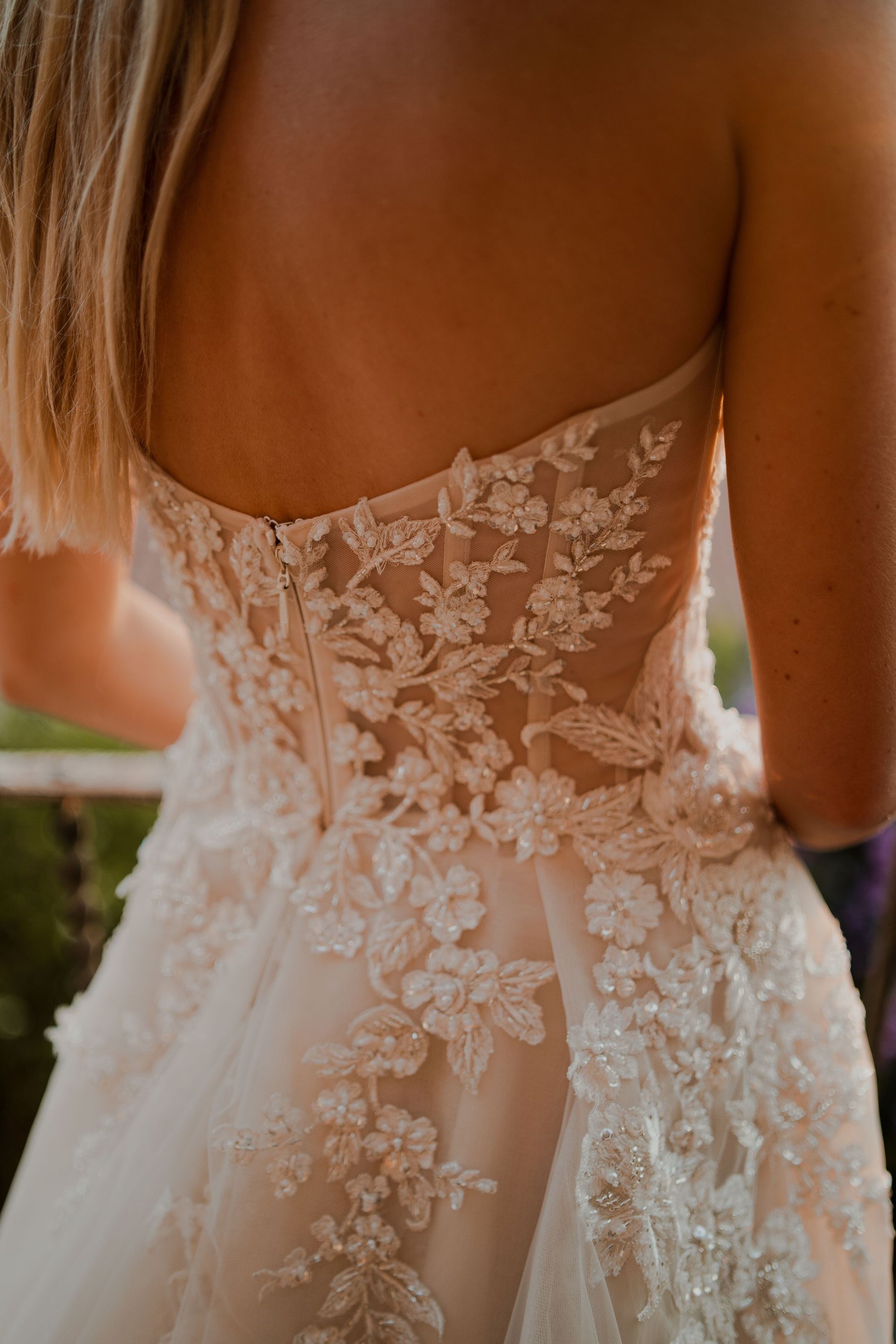 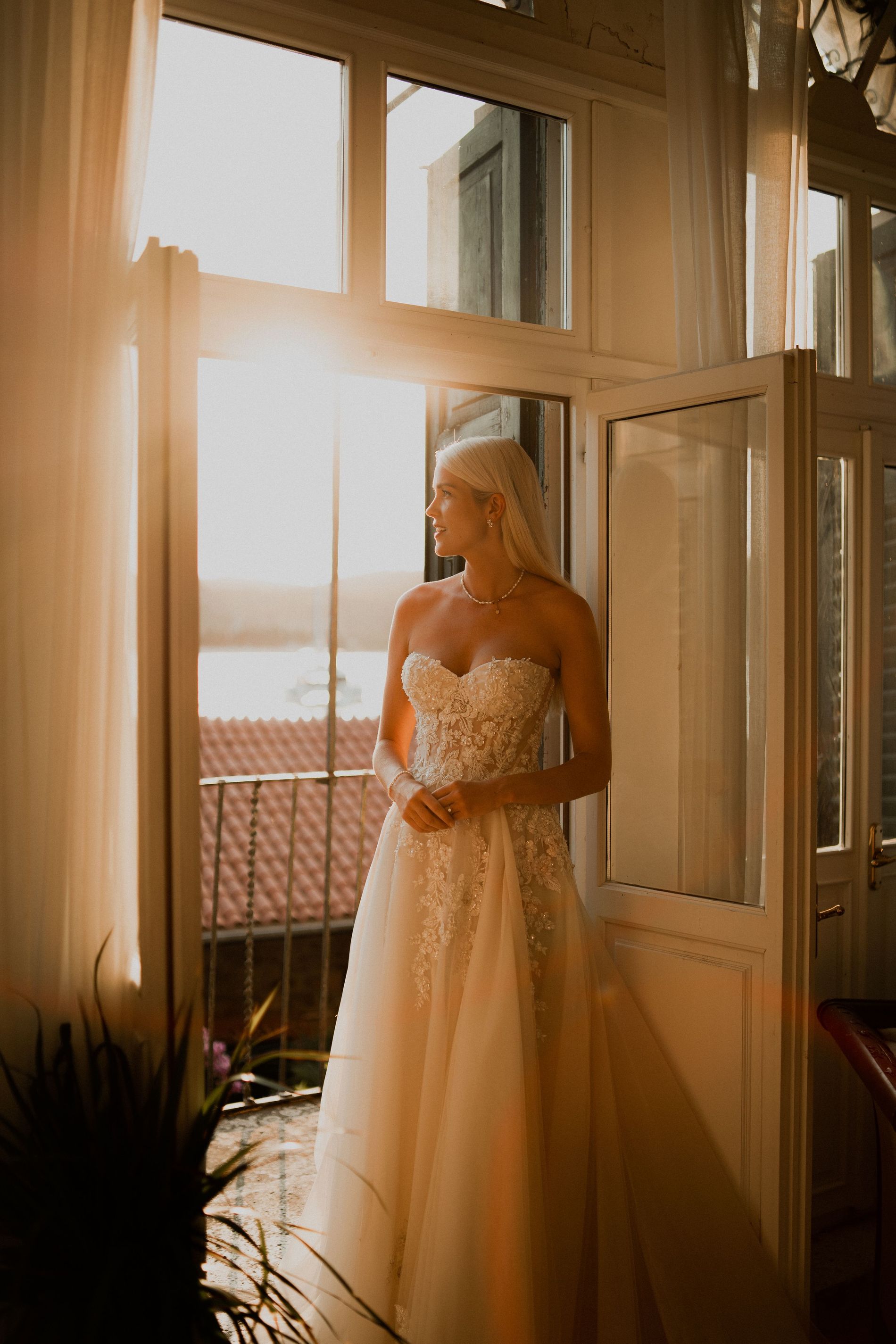 Given Leo’s experience as an event host, preparing a week’s worth of activities, boat excursions, parties, brunches, and dinners was a walk in the park. On Wednesday all the islands’ speedboats (and speakers) were occupied by guests for a day of adventure around the island with the Mamma Mia soundtrack blasting, of course; on Thursday evening it was a change of pace with a traditional Croatian-style family dinner of peka (slow cooked dish of fish, meat, and vegetables) to show a different side of the island. ABBA tunes and lots of dancing continued late into the night; and on Friday evening, the day before the ceremony, the couple hosted a White and Gold party in the gardens of their accommodation, Palazzo Kut, a beautiful 16th century villa overlooking the sea and made famous by the Mamma Mia film.

“We truly couldn’t imagine a better place to stay for our wedding week and it was the perfect common area where we welcomed our guests throughout the week,” says Ása.

Like many brides, Ása says it wasn’t easy to find the perfect dress, but when she tried on the Gia gown from Galia Lahav, she immediately knew it was ‘the one.’ 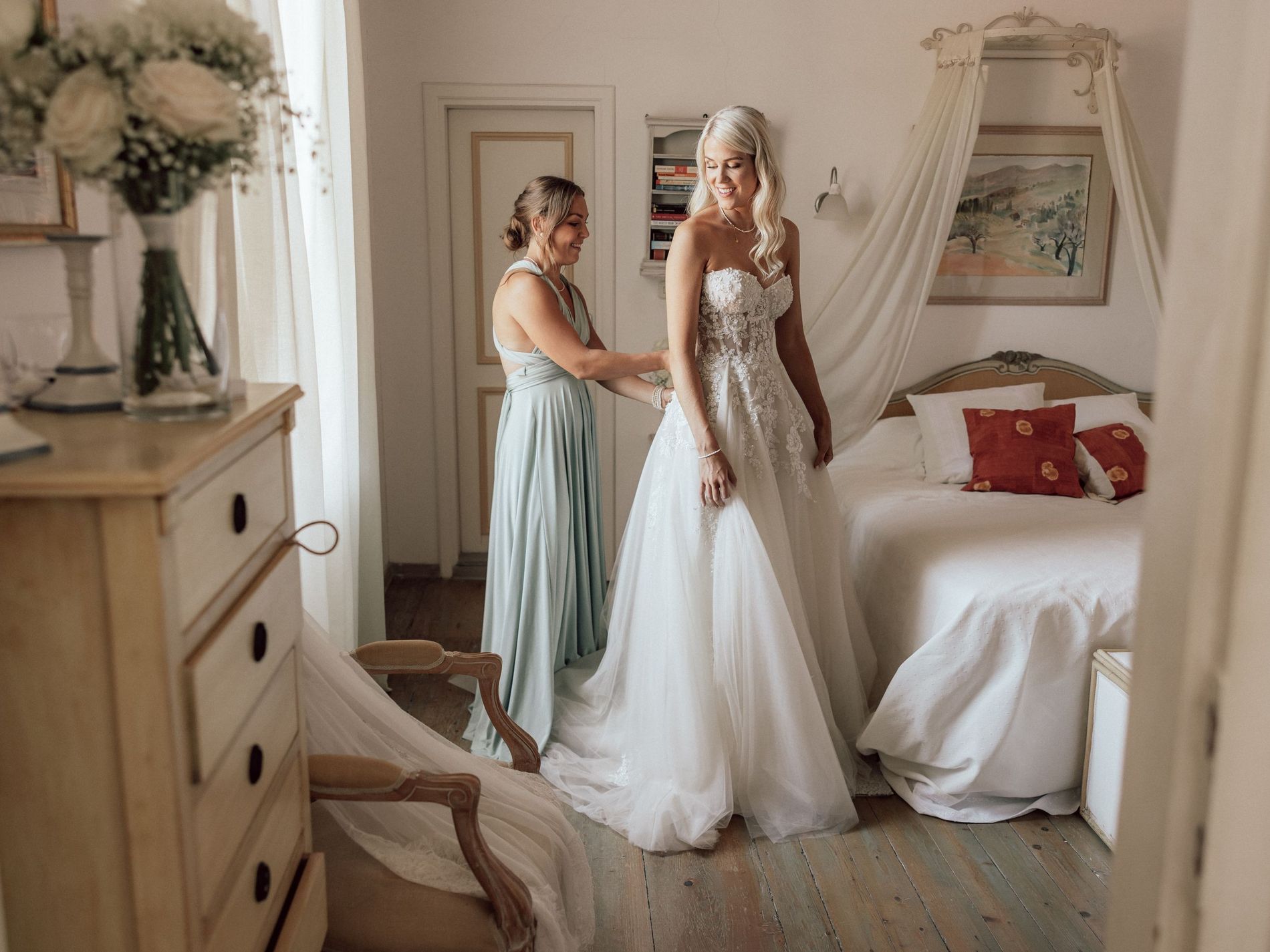 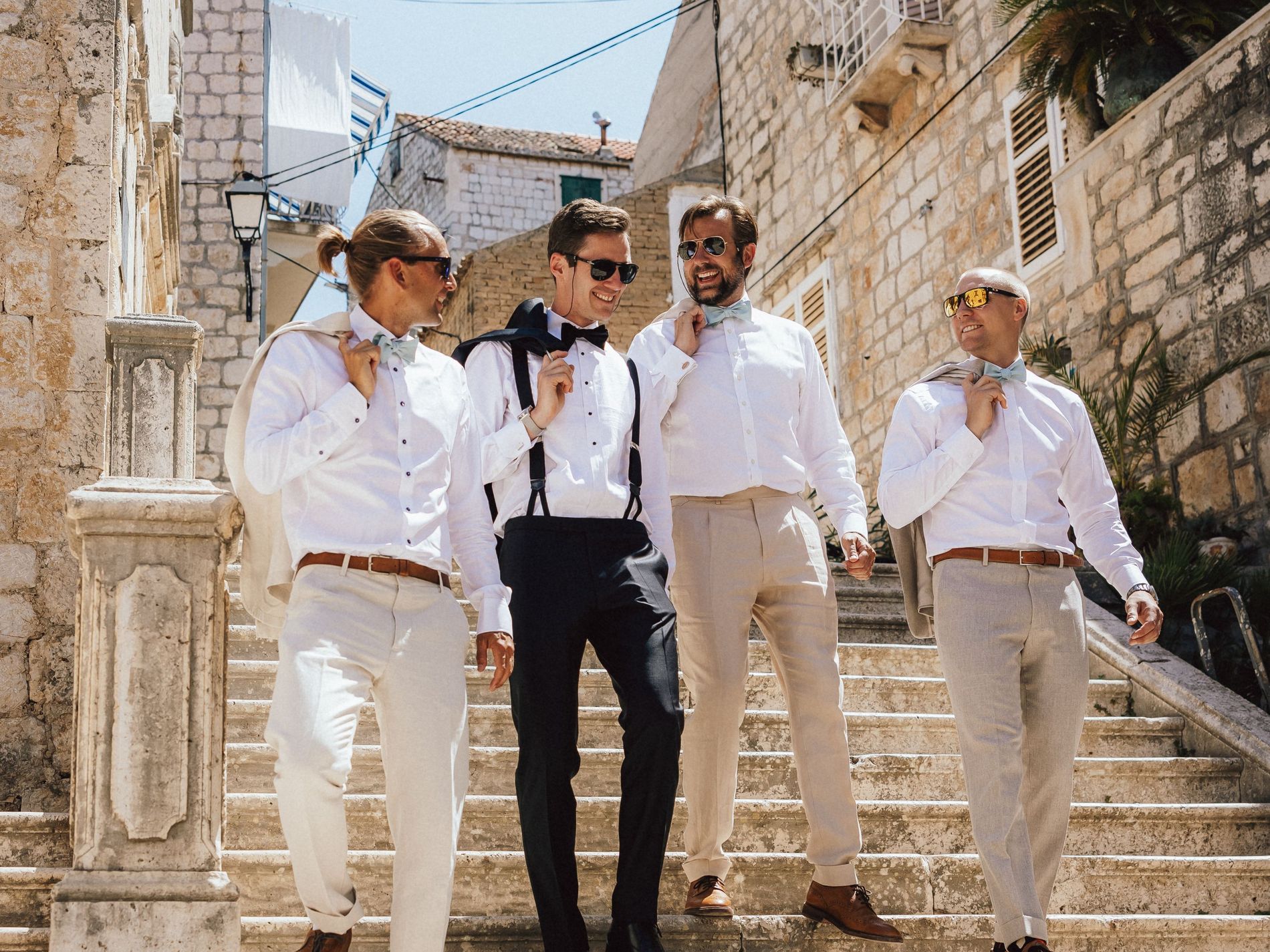 “What I love about the dress is that it’s designed with tall girls in mind," she says. "I’m so tall and every dress that I tried on just simply wasn’t designed for my body. It’s a stunning strapless, corset dress that has a vintage look and a ‘royal’ vibe. I fell in love from the moment that I saw it and tried it on. To me, it’s a true piece of art and I hope that one day I’ll have a daughter or a relative who will get married in this same dress.”

The bridesmaids chose their own dresses and went with a light green shade, and the groomsmen wore green bowties to match; Leo opted to wear a traditional black tuxedo.

Together with their officiator and Leo's long-time friend, Max Rantz-McDonald, the couple designed, what they describe as “a very non-traditional ceremony” which was the perfect mix of emotion and laughter.

“Walking down the aisle was one of the most beautiful and breathtaking experiences of my life,” says Ása. "Me and Leo walked down the aisle together, breaking the tradition of having my father walk me. It was truly an empowering moment, where we got to step outside of the fortress and see all our family and friends gathered. It was like time was standing still, and tears started streaming down our faces. It was such a beautiful moment to see all our colourful guests gathered on the roof of the fortress. Also, we hadn’t seen the ceremony setup and it was so beautiful, far beyond expectations." 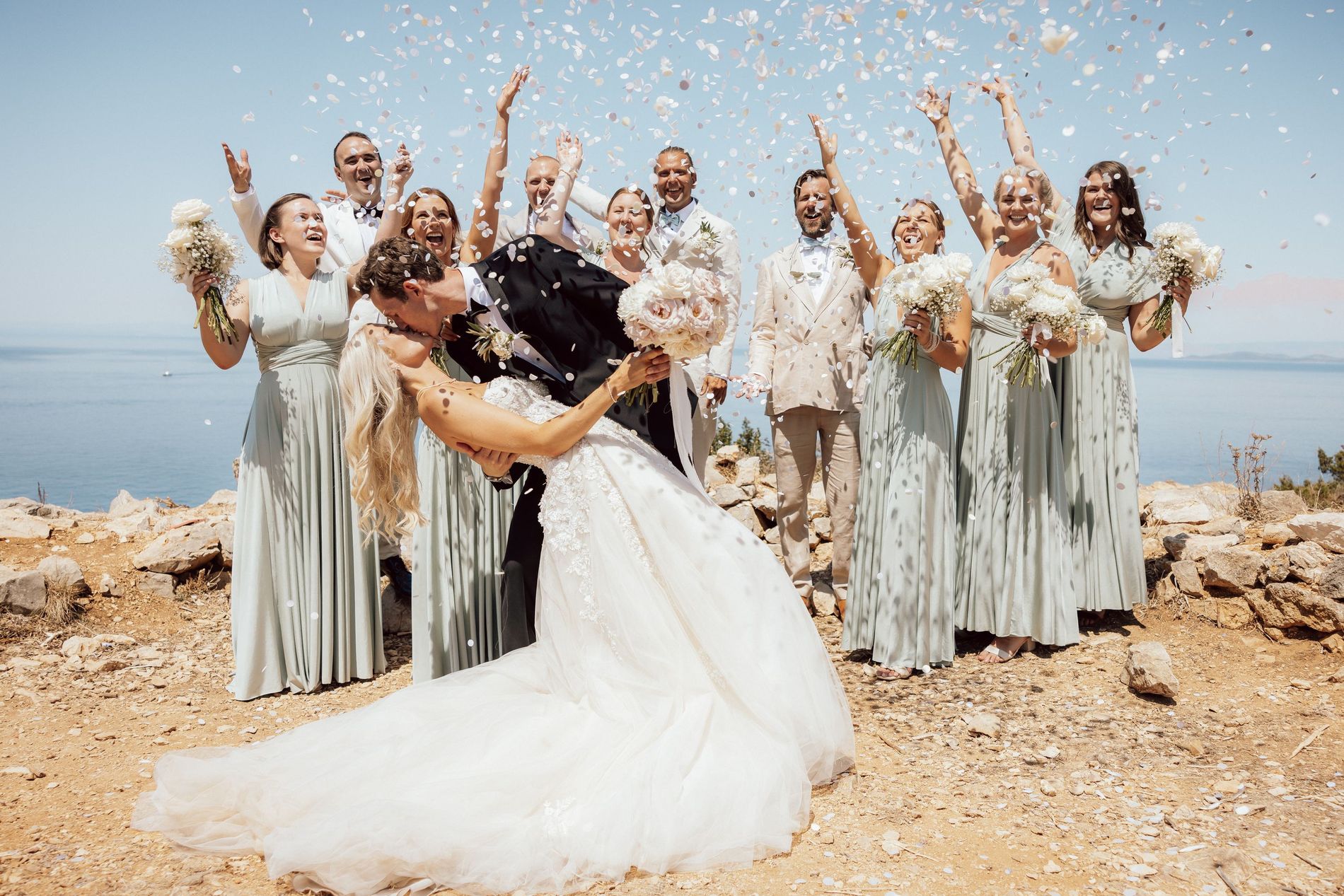 A touching moment was the sand pouring ceremony where Leo and Ása bought sand from their hometowns – for Leo sand from a beach close to his home in the south of Sweden, and Ása black sand from Iceland – and poured it into a large glass vase while Max explained how the sand symbolises the newly-married couple: impossible to separate, just how it is impossible to separate the white from the black sand in the vase.

Max also had an idea to pass the rings around to the guests. “Since they will sit on our fingers for the rest of our lives, this was the perfect opportunity to allow our friends and family to touch them and put their well wishes into them for us to carry,” says Ása. 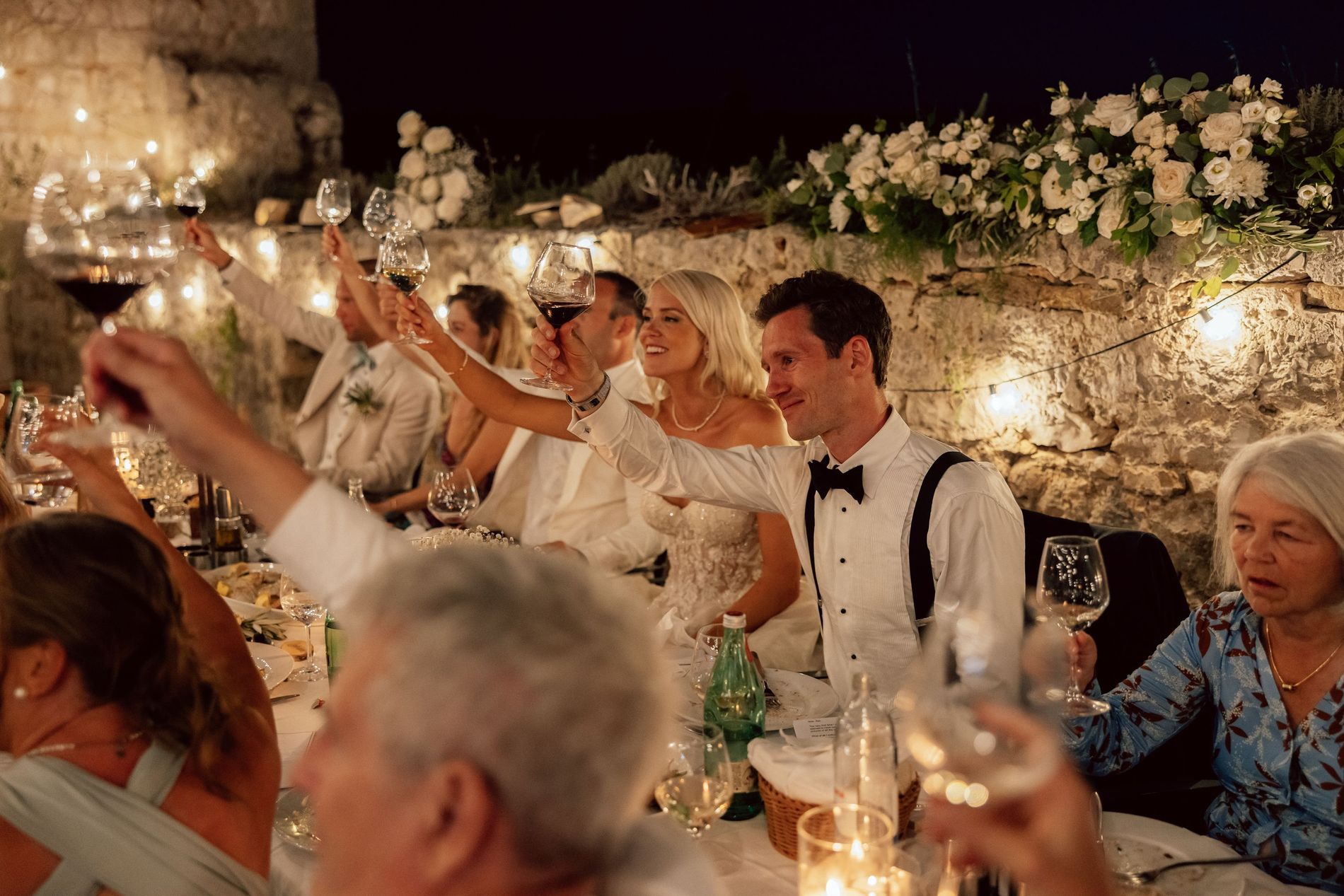 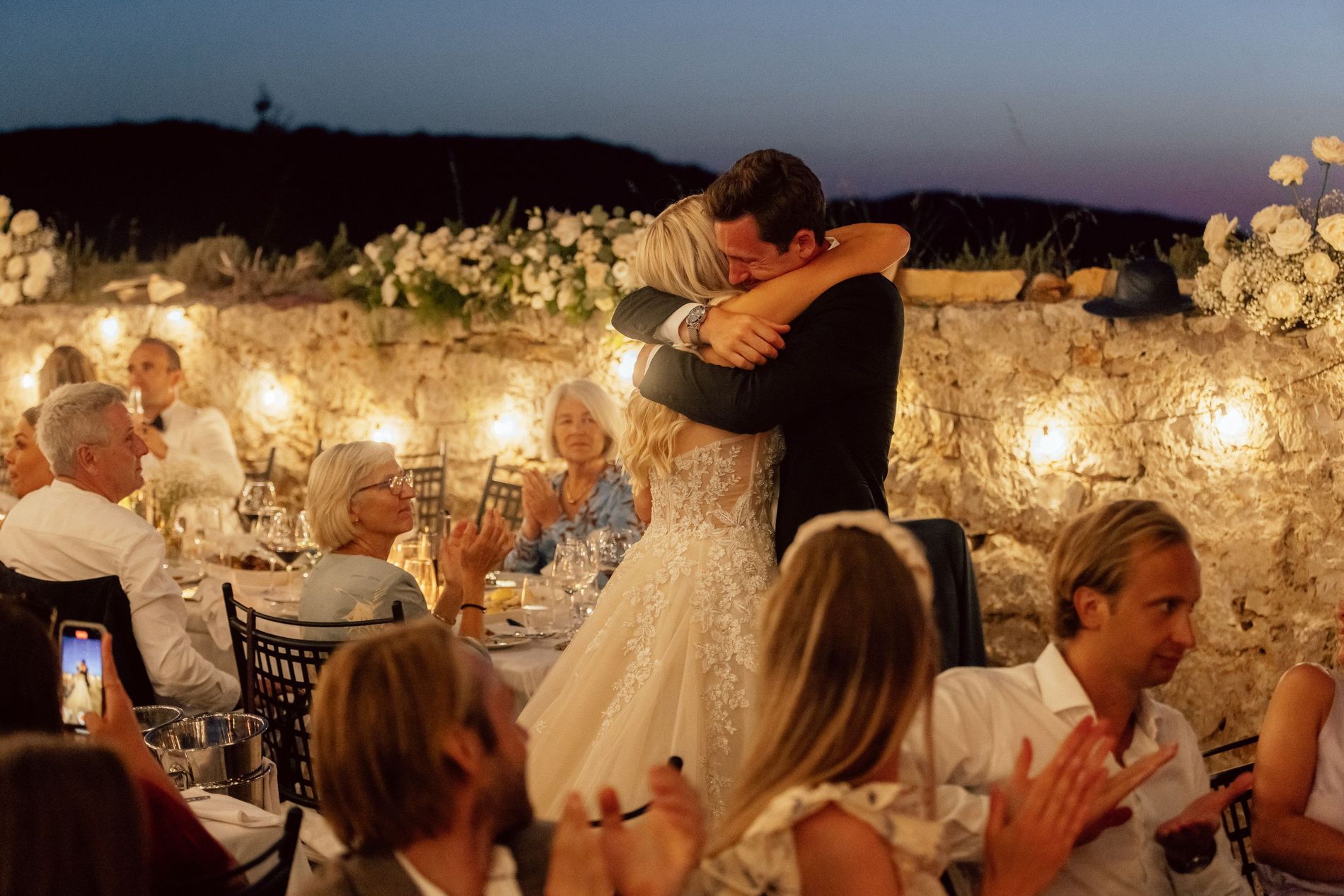 To close the ceremony, their vocalist sang Simply the Best, and all the guests stood up and sang and danced. “It was so magical and a moment I will remember forever.”

The couple very much wanted to make their reception and dinner “fun and a party to remember.”

Tables tightly placed together so guests were close to each other, and no formal bridal table aided in achieving this relaxed vibe at dinner. When it came to speeches – a quirk Swedish weddings are famed for – toastmaster Mark Rushmore was asked to keep to a tight but flowing schedule and a five-minute time limit on speeches.

“The result was perfect; every single speech was spot on and really enjoyable to listen to. Some of our international friends got a bit shocked when we told them there would be 15 speeches, but after dinner they said they could have easily listened to another 15 as they were all so fun and well delivered,” says Ása. Defying tradition again, Leo and Ása gave touching speeches to one another.

Then, with little encouragement from toastmaster Mark, guests were up on the chairs dancing the rest of the night away to ABBA – terribly fitting given how the couple’s whirlwind relationship began.

“Both Leo and I of course had very high expectations for this day. In the end this was so much better than we ever could have imagined,” says Ása. “It was so magical and emotional to get married, and at the same time so much fun to be surrounded by our best friends and party with them.

"When we got back to our villa, we just sat on a bench next to the ocean for almost two hours, watching the sun slowly rise on our first day as a married couple.”