Here, a breakdown of the lead-up to and fallout from the conflict and how to help vulnerable Ukrainians caught in the crossfire

After weeks of escalating tensions, the nearly 200,000 Russian troops assembled at the border of Ukraine began a broad military offensive early this morning, with many world leaders warning that the series of attacks could lead to the biggest conflict in Europe since World War II. Targeting a number of key Ukrainian military sites—many closely located to some of the country’s most heavily populated cities—dozens of deaths have already been reported in the capital of Kyiv and far beyond. 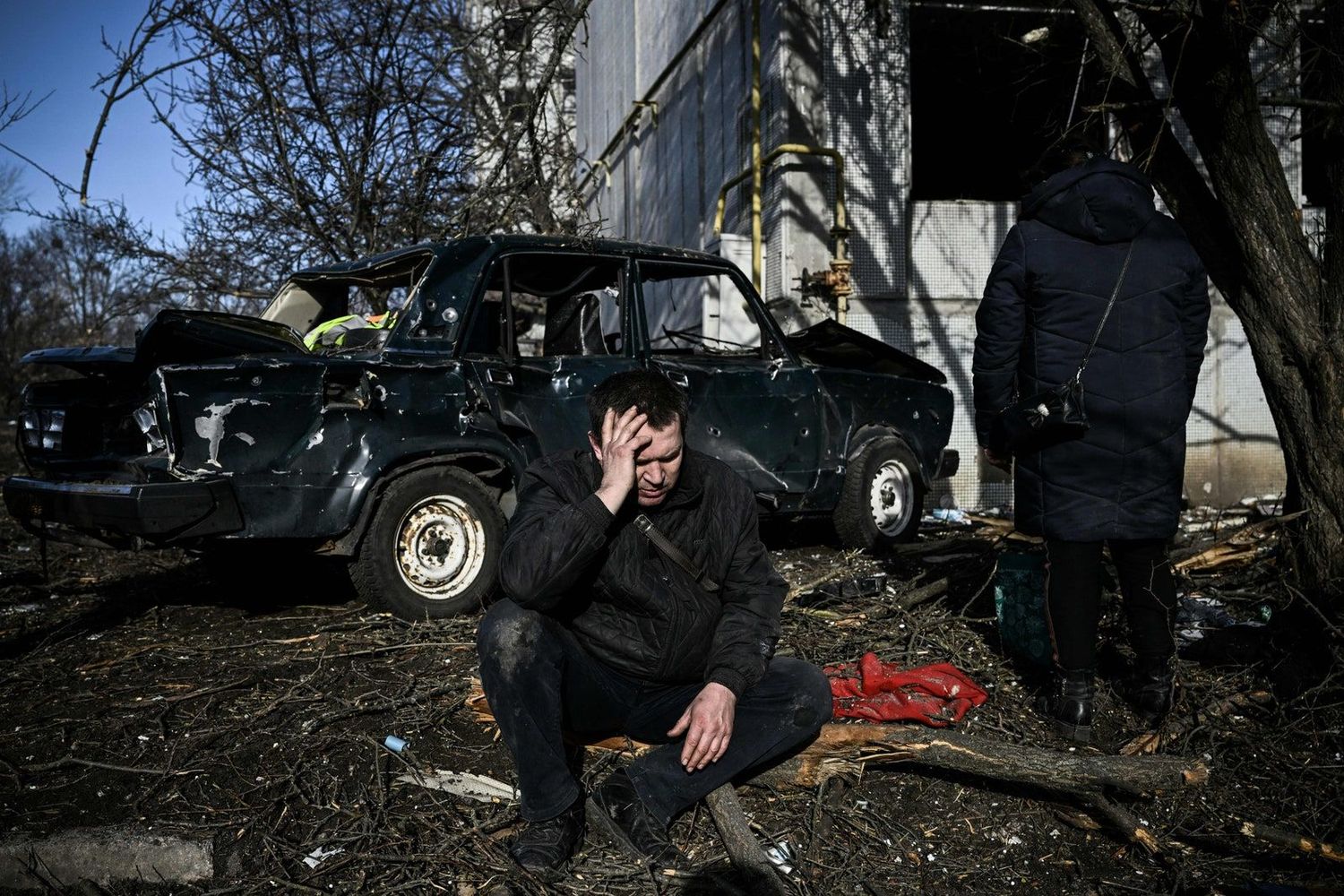 A man sits outside his destroyed building after bombings in the eastern Ukraine town of Chuguiv on Thursday morning. Photo: Getty

“The prayers of the entire world are with the people of Ukraine tonight as they suffer an unprovoked and unjustified attack by Russian military forces,” President Joe Biden said in a statement this morning. “President Putin has chosen a premeditated war that will bring a catastrophic loss of life and human suffering. Russia alone is responsible for the death and destruction this attack will bring, and the United States and its allies and partners will respond in a united and decisive way. The world will hold Russia accountable.”

The first round of attacks appeared to be targeting military infrastructure, in keeping with Putin’s (widely disbelieved) claim that his objective is simply to demilitarise the country and, in doing so, quash any threats to Russia’s dominance in the region. Many are predicting, however, that his next step will be to capture Kyiv in an attempt to seize control of the country and its contested borders. The attacks mark the latest chapter in what many have believed to be Putin’s endgame from the beginning of his leadership. His belief that the fates of Russia and Ukraine are inextricably tied together has been argued as a grave misunderstanding of history, but it is one that could have serious ramifications for Europe’s future.

Here, a breakdown of the lead-up to and fallout from today’s conflict and how to help vulnerable Ukrainians caught in the crossfire

How did we get here?

The roots of the Ukraine-Russia crisis can be traced back all the way to the two countries’ origin stories, with many of the Russian nationalists backing Putin citing a unique historical bond that began in the ancient world. Arguably more important, though, is the strongly held belief among conservative Russians—particularly those who share Putin’s nostalgia for the country’s cultural influence at the height of the Soviet Union—that Ukraine was never deserving of the right to self-govern following the dissolution of the Eastern Bloc in 1991.

Over the past two decades, progressive Ukrainian politicians have expressed their ambitions to become a part of NATO and the European Union, which Putin and his cohort see as an existential threat to Russian dominance in the region, arguing via state propaganda that it is a nefarious attempt by the West to intimidate Russia or meddle in its affairs. While tensions between the two countries have flared into military conflict before—most notably following the ousting of the Russia-supported former president Viktor Yanukovych in 2014, which led to the Russians’ annexation of Crimea—the threat of war began to escalate more dramatically following Ukrainian president Volodymyr Zelensky’s approval of a security strategy in September 2020 that would pave the way for the country to gain membership to NATO, leading to fierce rebukes from Putin. Since last spring, a steady stream of Russian troops has been moved to the borders of Ukraine, conducting military exercises and occasionally engaging in skirmishes at the border. 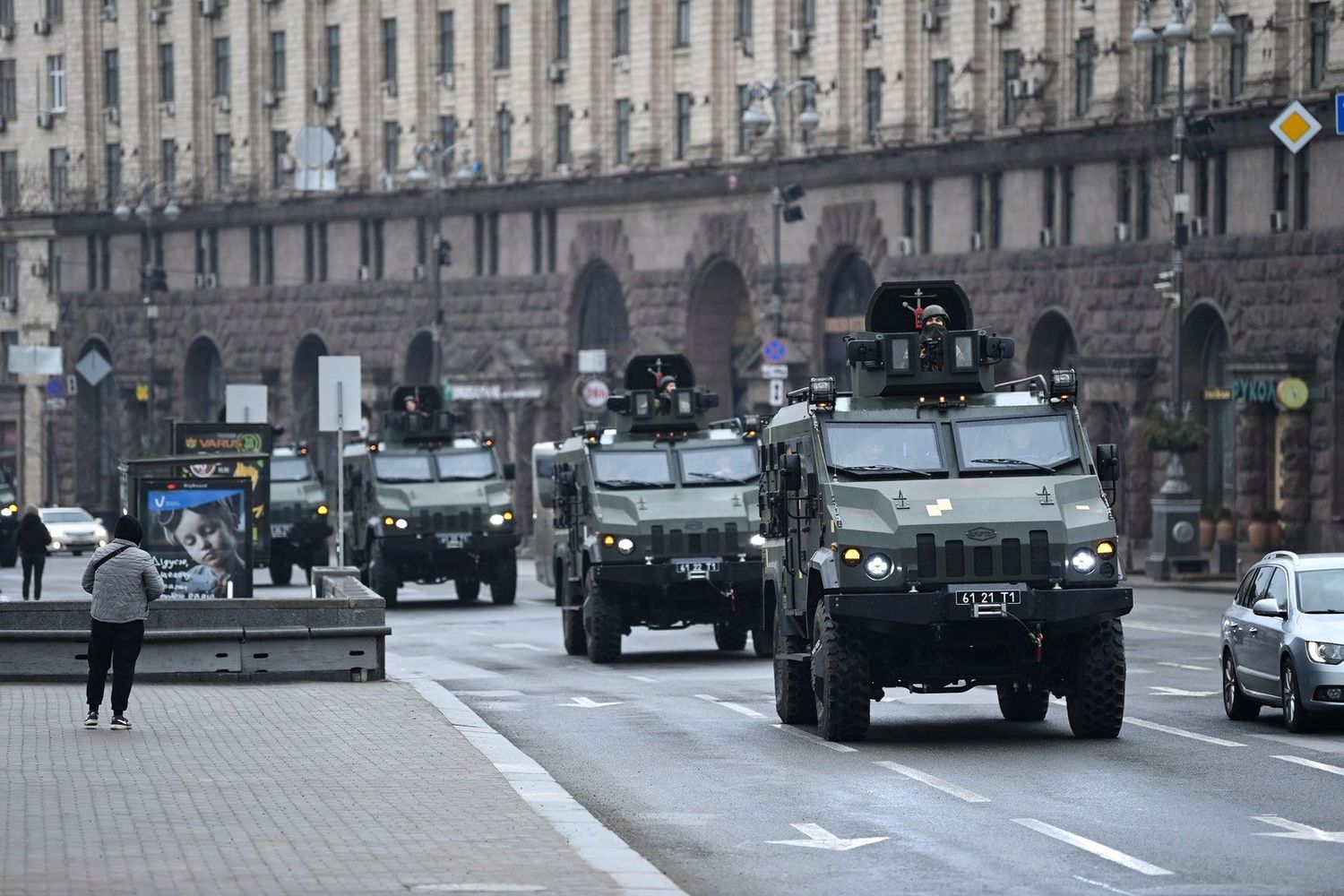 What happened this week to heighten tensions?

On Monday, Putin formally recognised the contested eastern Ukrainian regions of Donetsk and Luhansk as republics. Widely viewed as a signal that a full-scale invasion was imminent, Biden declared it “the beginning of a Russian invasion of Ukraine.” Following unsuccessful pleas to Russia from both Zelensky and the U.N. Security Council, at dawn Putin launched a series of missiles and airstrikes across dozens of military positions around Ukraine, with a second wave following shortly after.

What does Putin want?

One of Vladimir Putin’s most confounding qualities is that he’s nearly always willing to openly express what his end goals are but rarely how—or why—he hopes to achieve them. In a broadcast early this morning to the Russian nation, where his announcement of a “special military operation” in Ukraine was widely viewed as a declaration of war, Putin cited the historical context of American intervention in the Middle East as an example of hypocrisy, while also declaring that any foreign country attempting to interfere with the conflict will face “consequences you have never seen.” (Many interpreted the comment as a threat of potential nuclear warfare.)

Putin has held ambitions to bring Ukraine back into Russia’s sphere of influence since his early political career, regularly citing his belief that they have always been a single nation and that during the dissolution of the Soviet Union, Ukraine was corrupted by Western powers and turned against its historical allies. (Recent polls indicate that a majority of Ukrainians favour a transatlantic military alliance with the West.) For Putin, the reasons for invading seem to be as much for a sense of sentimental national pride and historical revisionism as they are for any tangible benefits that might be achieved by gaining access to Ukraine’s resources as a country. 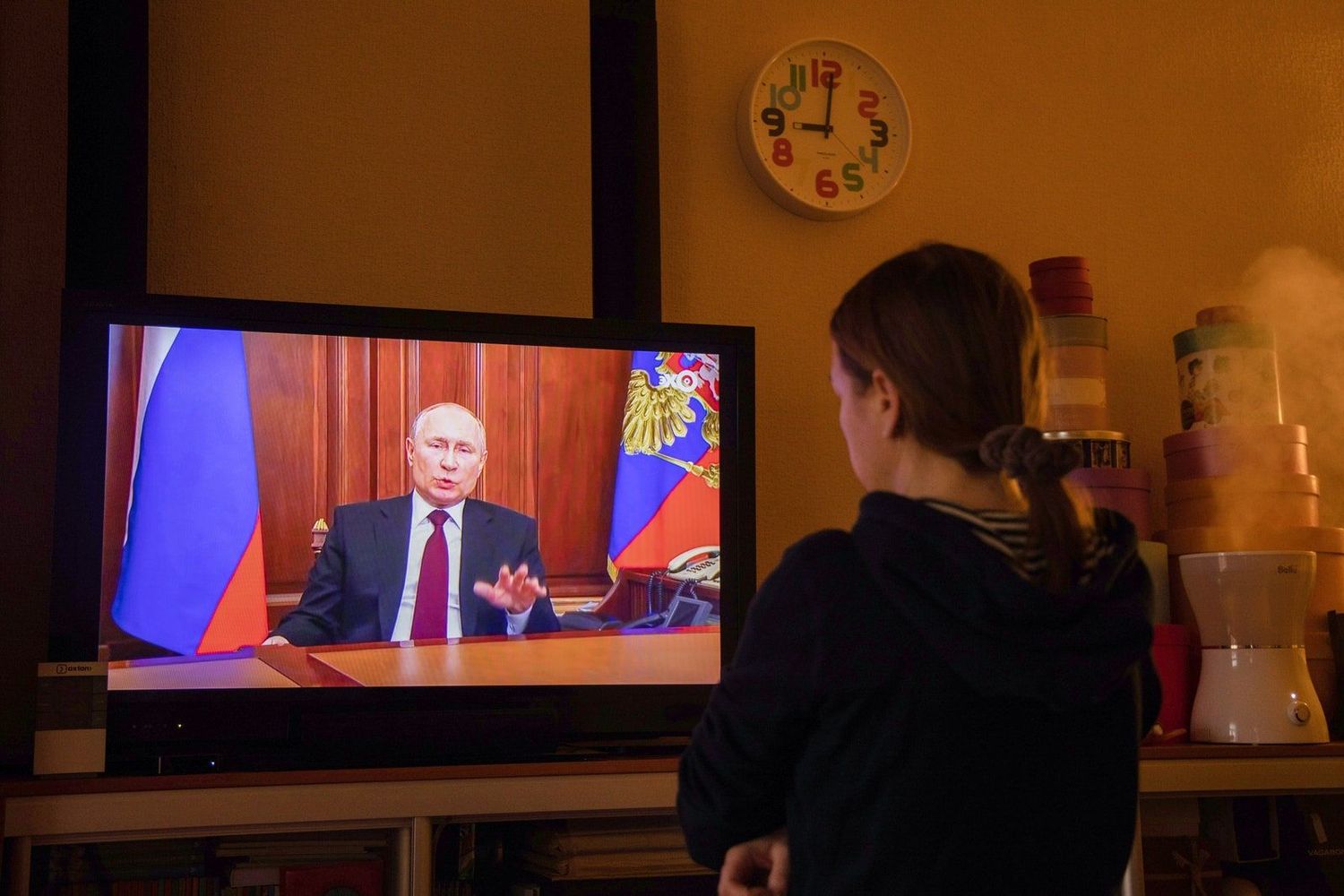 A resident watches a live broadcast of Vladimir Putin’s address on Monday in Moscow. Photo: Getty

What will happen next?

While many are reluctant to predict the next steps in the crisis for fear of catastrophising around what is already a tragedy, it is likely that the conflict will escalate. Today’s attacks made it clear that Putin’s intentions are not simply to annex the contested border regions but to target Ukraine as a whole. Some are predicting that his primary objective is to overthrow the current leadership and install a puppet regime in its place that is sympathetic to Russian interests.

It is not likely, however, that the West will engage in physical armed conflict, but there is every possibility the conflict could usher in a new era of cyber-warfare. A wide range of economic sanctions is also expected to be put in place by G7 member states and their allies, after senior politicians from around the globe coordinate their plans throughout the rest of today. These may extend as far as to impact Putin’s personal wealth and those of his closest associates, many of whom have major assets and investments in countries such as the U.S. and U.K. that are firmly opposed to Russia’s intervention. Whether these diplomatic efforts will help to deescalate the crisis in any way remains to be seen.

How can we help?

Already major protests and demonstrations in support of the Ukrainian’s right to independence have begun taking place outside of Russian embassies in major cities across the globe, with more expected to follow this coming weekend. In terms of providing concrete support for displaced or vulnerable communities on the ground in Ukraine, however, a number of NGOs and organisations are already actively working to provide food, shelter, and medical supplies for civilians affected by the crisis.

Initiatives open to financial contributions include the UN Refugee Agency, USA for UNHCR, which is providing emergency aid to refugee families in the country via a restricted donation fund, and CARE, a Geneva-based nonprofit that is also raising money for hygiene kits, water, and cash assistance in the affected regions. Meanwhile, the Ukraine Crisis Media Center has several alternative means of backing the country’s efforts to resist invasion, including supporting boycotts, joining local rallies, and reaching out to your political representatives.

This story was originally published on Vogue US