Follow alongside our beauty editor Esteban G Villanueva as he joins the Valentino Beauty team for a unique exploration of Rome, it’s hidden, secret places and discovers the newest member of the Born in Roma family, Coral Fantasy

In collaboration with Valentino Beauty

The legend says that all roads lead to Rome — and that to shine your brightest light is to be who you truly are.

Pierpaolo Piccioli said that one doesn’t have to be born in Rome to feel like a Roman and for 24 hours I became a true descendant of the Pantheon itself. Born in Roma is a family of fragrances from Valentino that take inspiration from the centurial city itself to create accords and harmonies that encapsulate not only the Roman way of life but also the light that showers the city throughout the day. For 24 hours I had the pleasure of joining the Valentino Beauty team and exploring Rome in a way I had never seen before. The light of the sun guided our schedule and the scents of the Born in Roma family set the tone and mood for the activities throughout the day.

Read ahead to discover all the Roman stops inspired by the Born in Roma fragrance family.

First stop: A morning in the private garden under the chariot of Apollo 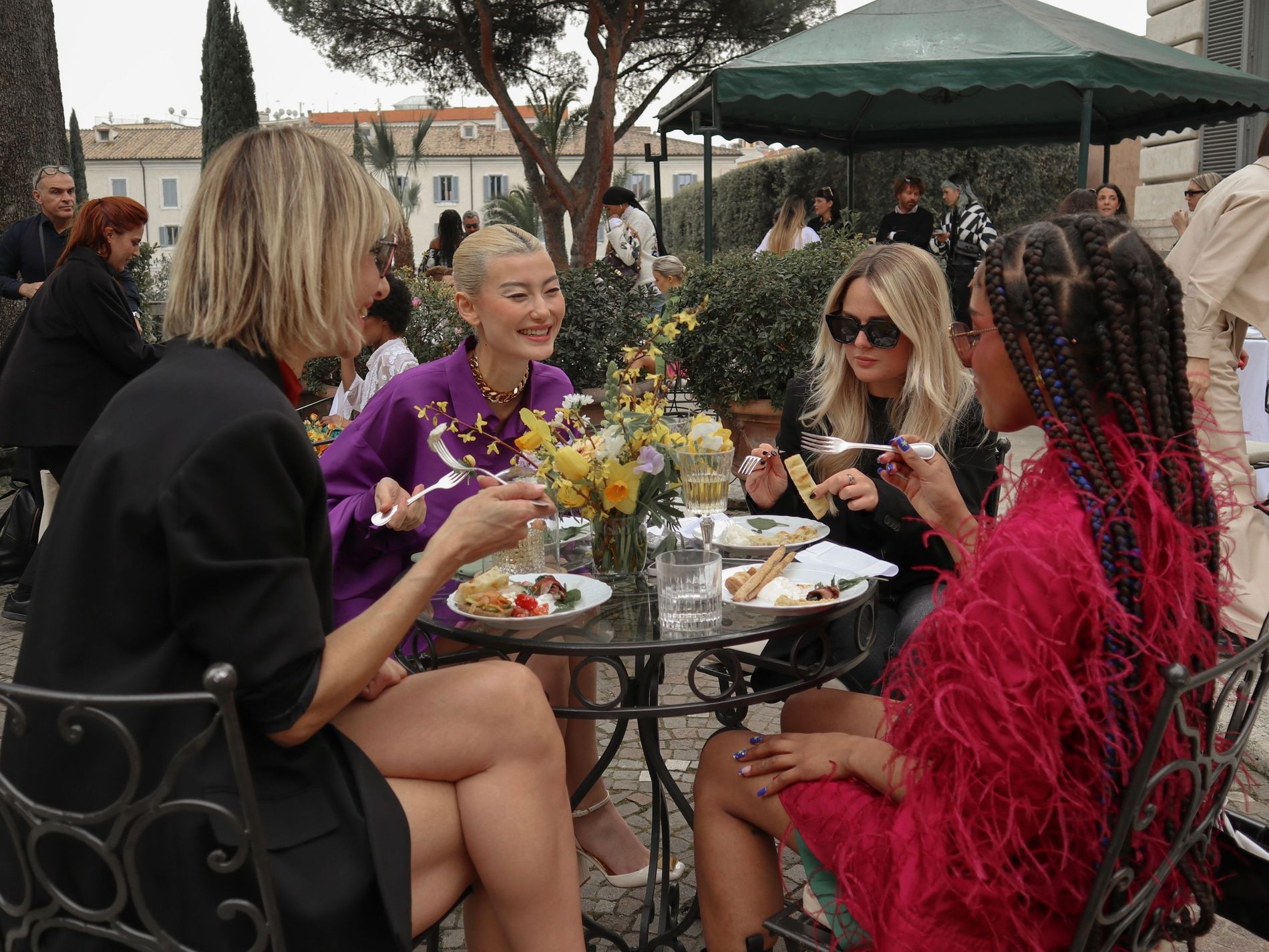 Guests enjoying brunch outside the Casino dell’Aurora in the Palazzo Pallavicini. 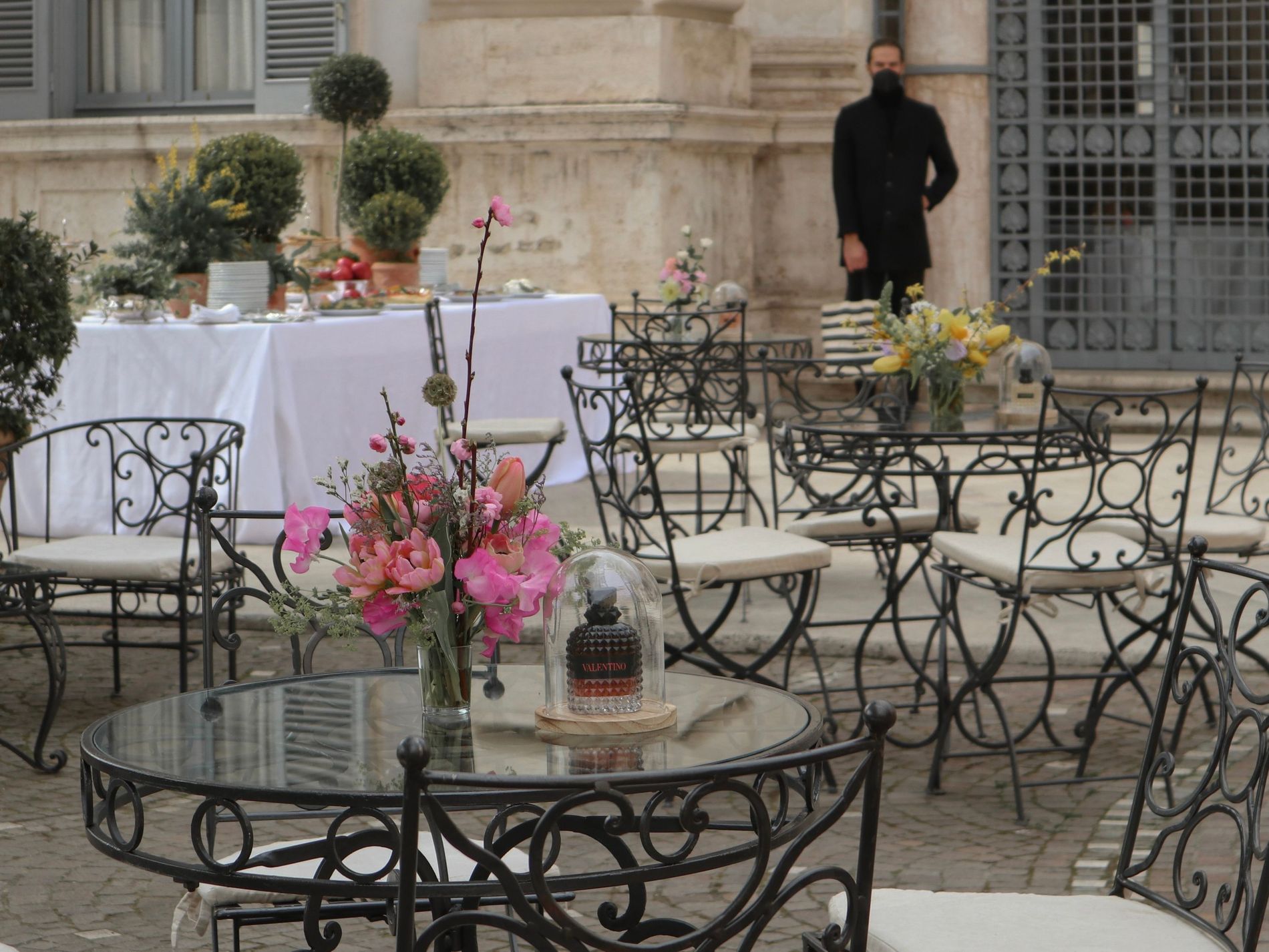 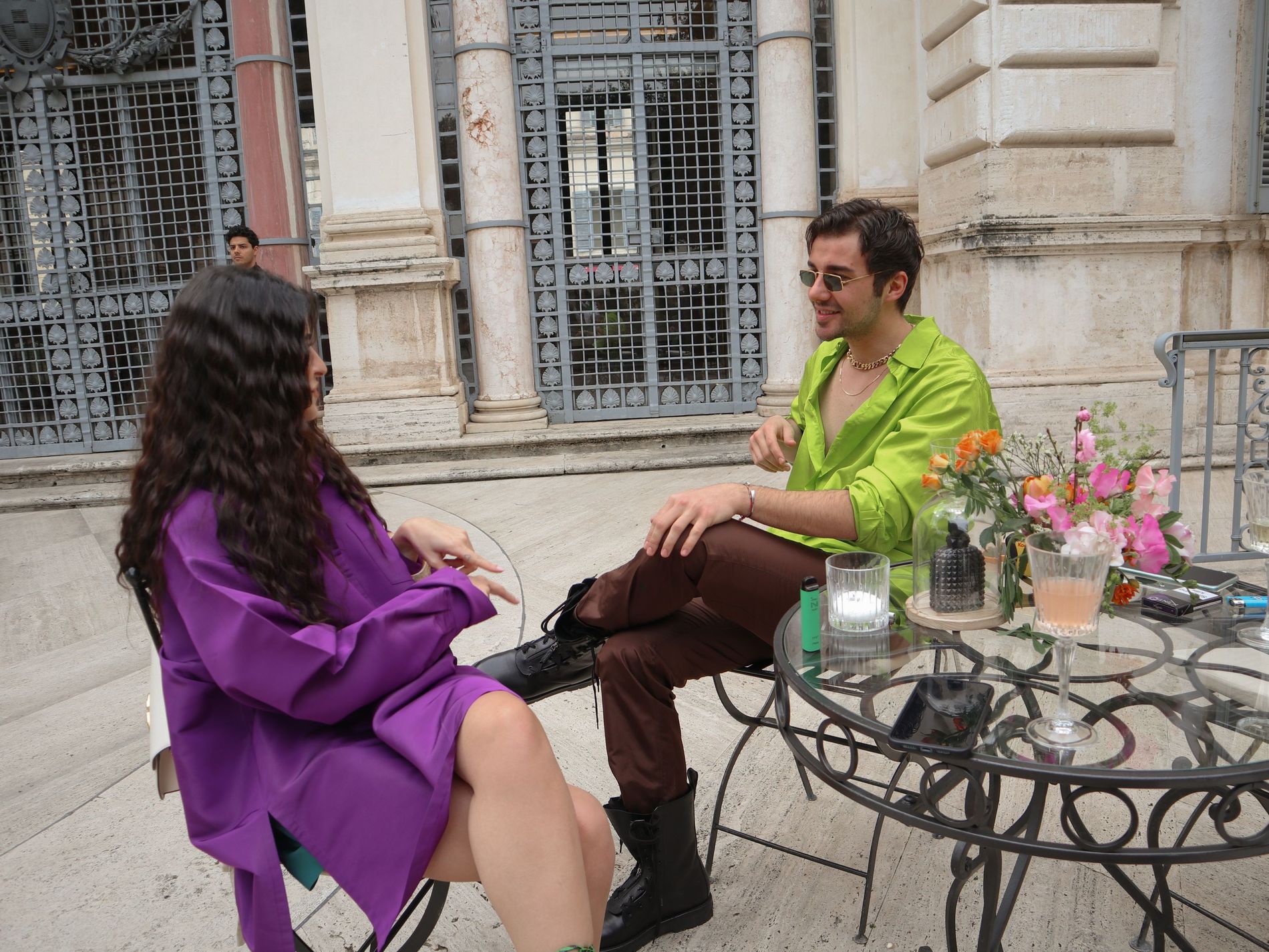 Dima Al Sheikhly and Cemal Can Canseven prior to entering the gallery.

Imagine a garden as calm and as alive as the morning light, filled up to the brim with greenery, ancient statues of once great thinkers and a design that just calms upon entrance. Well, that is the reality of the gardens at the Casino dell’Aurora in the Palazzo Pallavicini-Rospigliosi. The garden, which presents to the world the Casino, holds within its walls Bolognese painter Guido Reni's fresco masterpiece. In his art, L'Aurora, we can see Reni’s depiction of the sun god commanding his chariot above the skies while Aurora, the morning goddess, lightens up a new day. This exact moment, as the aurora breaks the darkness of night is the first inspiration behind the first and the original of the fragrances of the Born in Roma family. The original fragrance is an ode to self-celebration and the attitude one should hold towards life. It’s a floriental accord that is modernised through a woody overdose resulting in a scent that is meant to disrupt normality while being an irreverent twist. 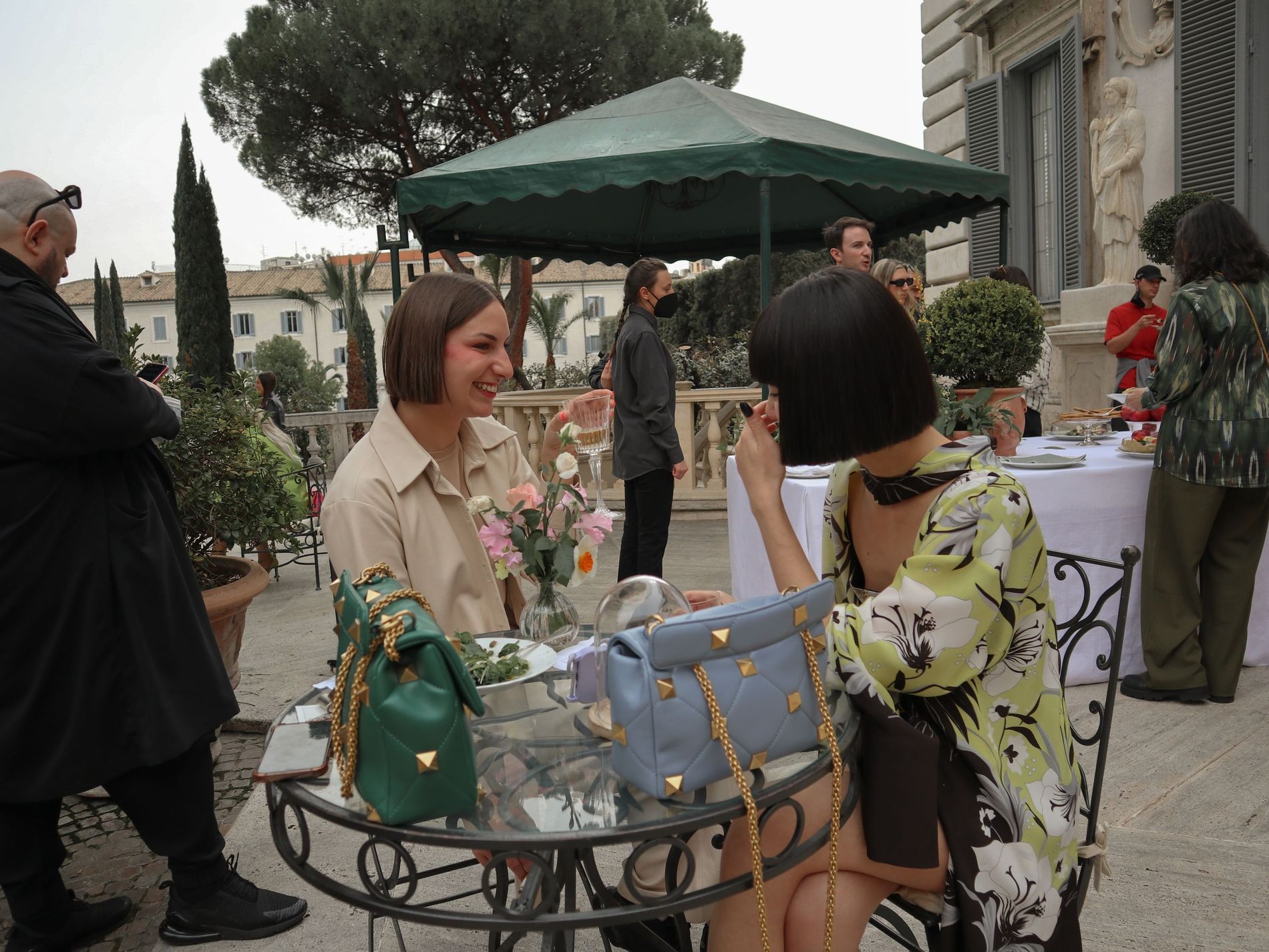 Born in Roma Original is a scent that opens with a soft floral accord without feeling powdery. Its energetic undertones work as a sensorial boost to start off the day. It's a scent that feels both classic and modern. Valentino Beauty has created the fragrance in both a male and female offering to represent where the reverence for the past, something intrinsic in the Eternal City, meets the irreverent attitude we should have for the present. With this in mind, we held a brunch that the goddesses themselves would’ve wanted to be a part of, while we basked in the morning light and cool breeze. However, as time goes and Apollo’s chariot makes it way through the sky, the light progresses and with Rome as a character in this tale, the city itself tells us it’s time to move onto more experiences.

Second stop: A walk in midday sun, from Fontana di Trevi to a private palace 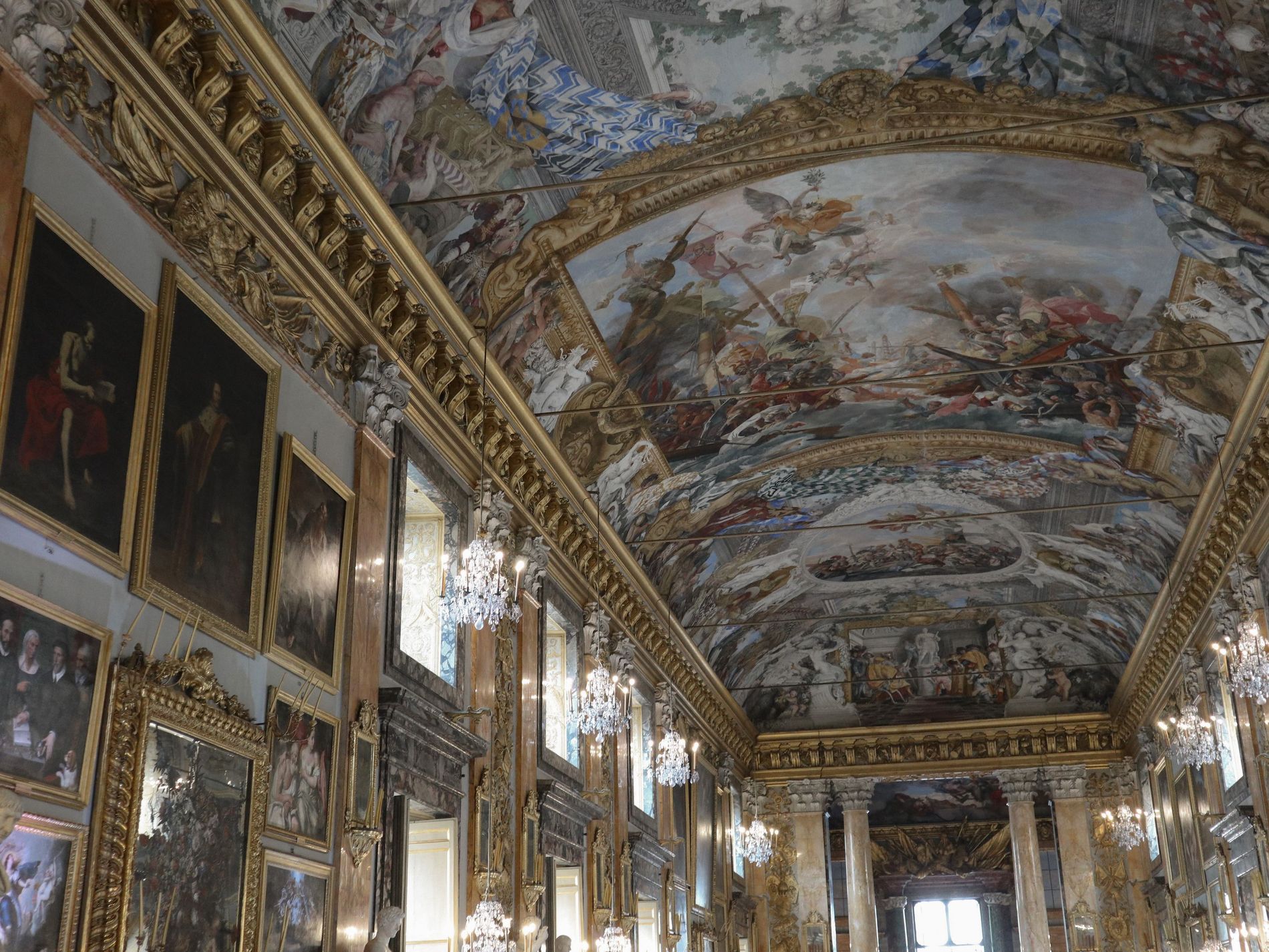 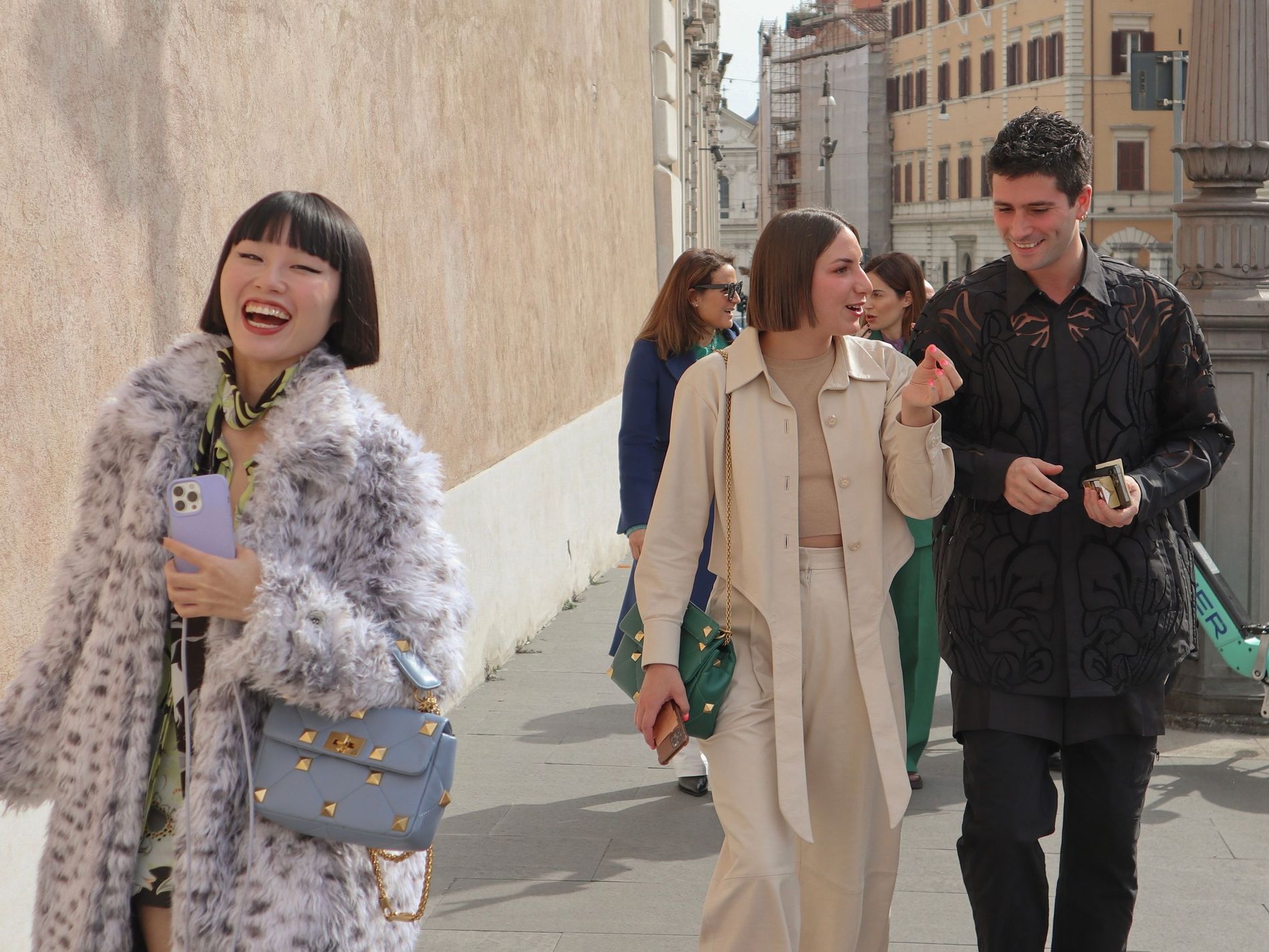 LinLin, Johanna Jaskowka and Marc Forne make their way through the Roman roads. 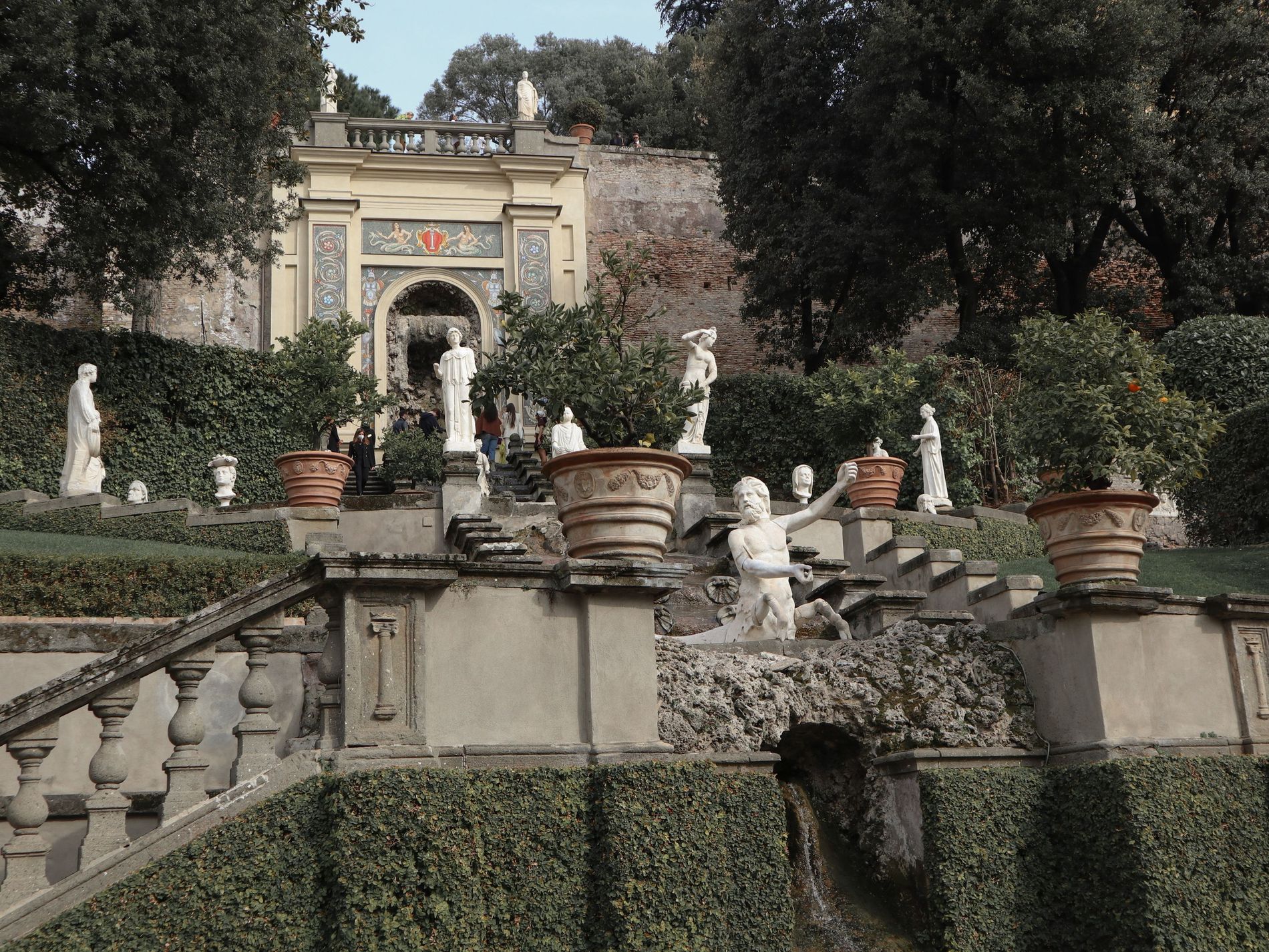 The private gardens part of the Palazzo Colonna.

Continuing the adventure, we embarked by foot to explore the Eternal City while the golden, yellow sun lit up the way. From the private garden we swept onto the cobblestone streets of Rome until we came across a closed gate. Under the glistening sun the gates opened to reveal the most breathtaking of gardens and views over the Roman landscape. The lands of the Palazzo Colonna spread in front of our eyes, while the city unfolded at its feet. It was there, amidst the lush greenery and under the golden sun, that Rome itself unveiled for us the inspiration behind the second darling of the Born in Roma family, Yellow.

Bathed under the glistening sun, the emotional notes of the scent became clear: sparkling, vibrant, confident. Yellow embodies the best of Rome at the highest point of the day. Within it, Rome itself becomes this being you wish to know more about, you seek to discover and you wish to explore the city with. The musky floral intrigues with its pure and reassuring accord while its masculine counterpart is inspired by Rome in a deep, reassuring light. 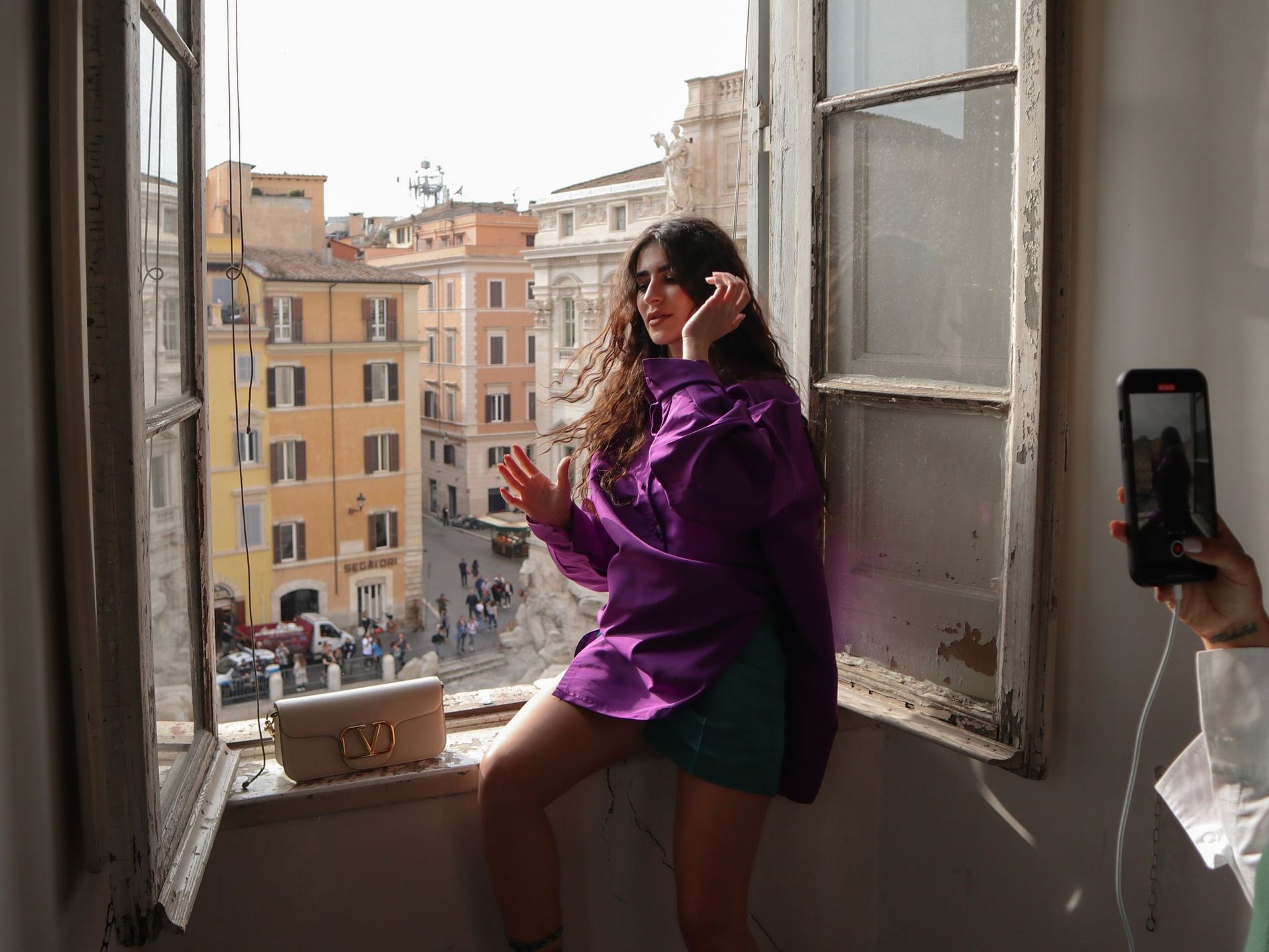 Dima Al Sheikhly posing in front of the Fontana di Trevi from the private studio of Shay Frisch. 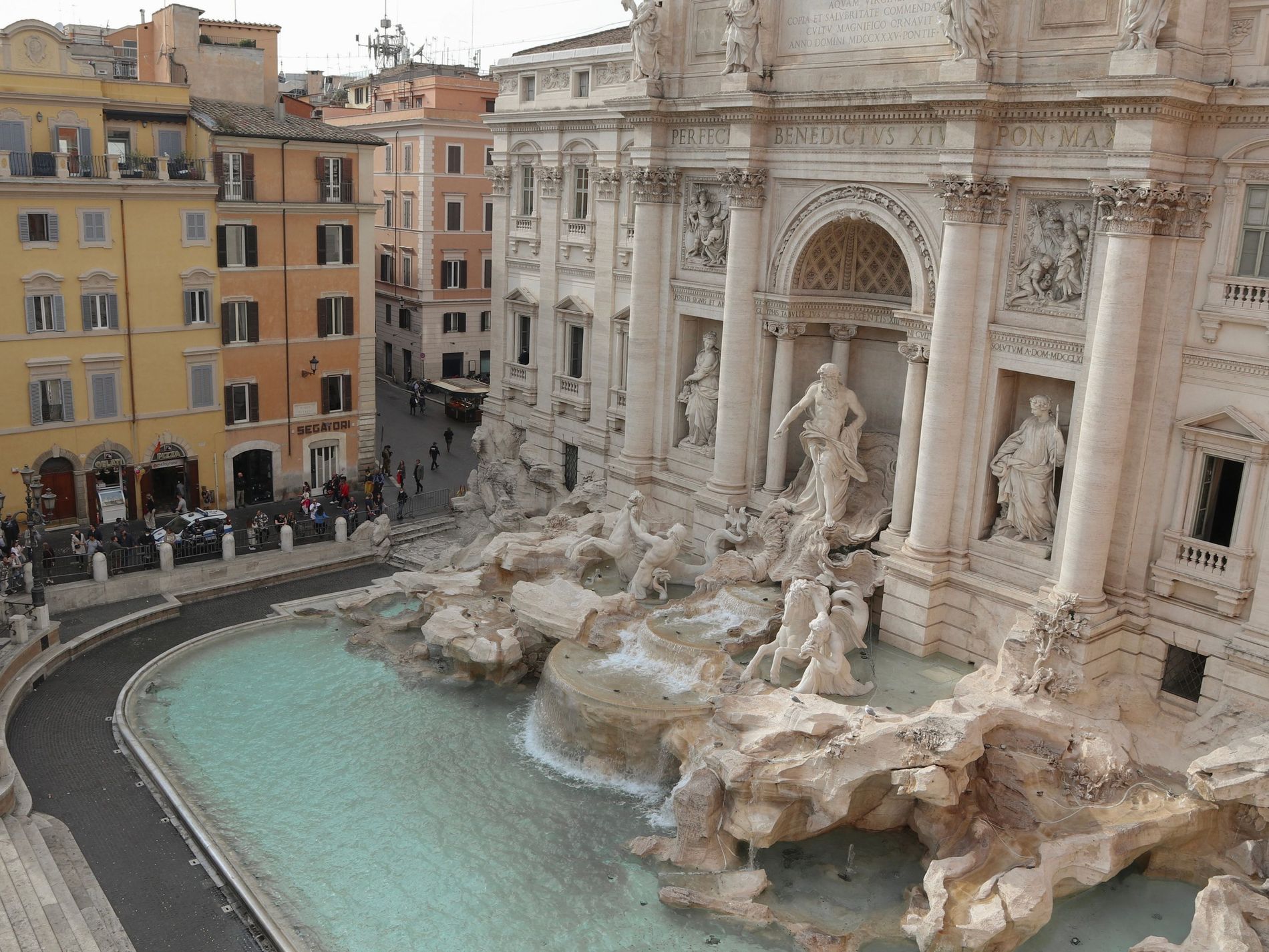 The view of the Fontana di Trevi from the private studio of Shay Frisch. 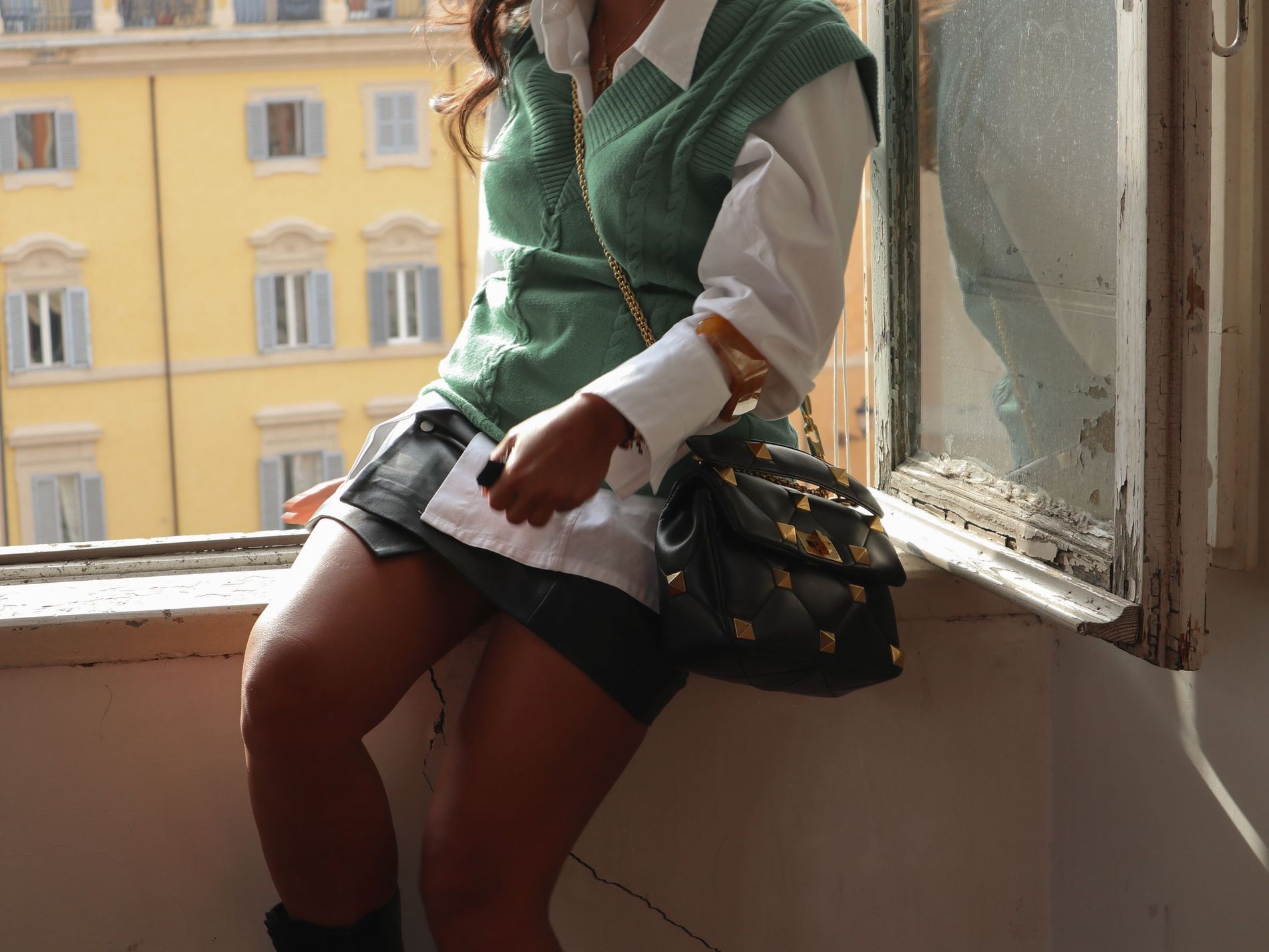 From there, new unknown places were unveiled. We all know the Fontana di Trevi, but do you know about the private studio above the fountain where Israeli artist Shay Frisch explores with light and mechanical connections? We know about the palaces, but have you seen the interiors of the Palazzo Colonna where still today in the main hall you can find the remnants of a cannonball that once ago impacted the palace amidst war times? Yellow knows them, and it took us through every hidden-known place of the city before guiding us to the last chapter of our journey.

Third stop: A sunset celebration with the honoured guest of the night

The new Valentino fragrances with a panoramic view of the Roman city. 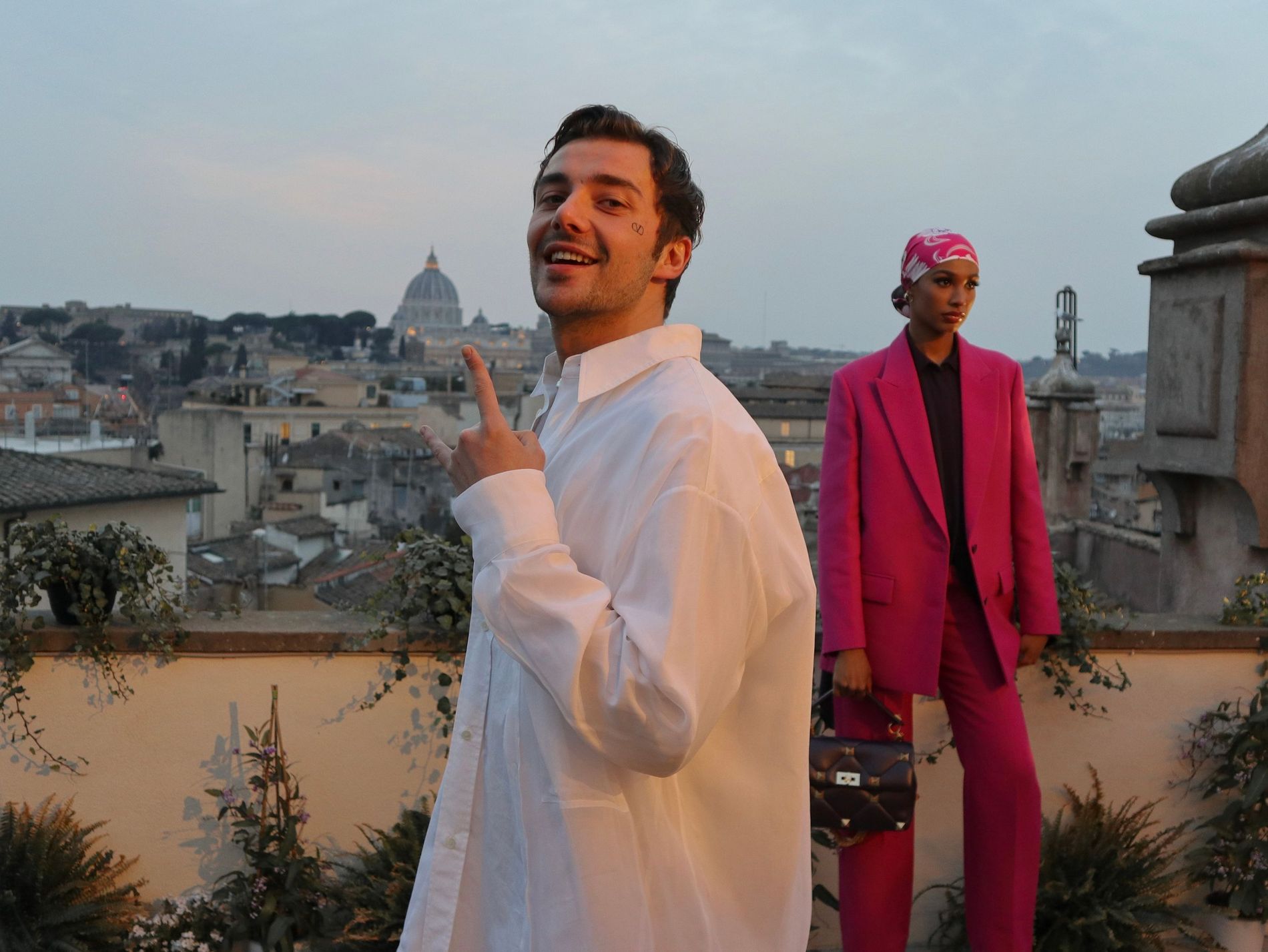 Cemal Can Canseven and Ikram Abdi enjoying the sunset celebration at the palace's terrace. 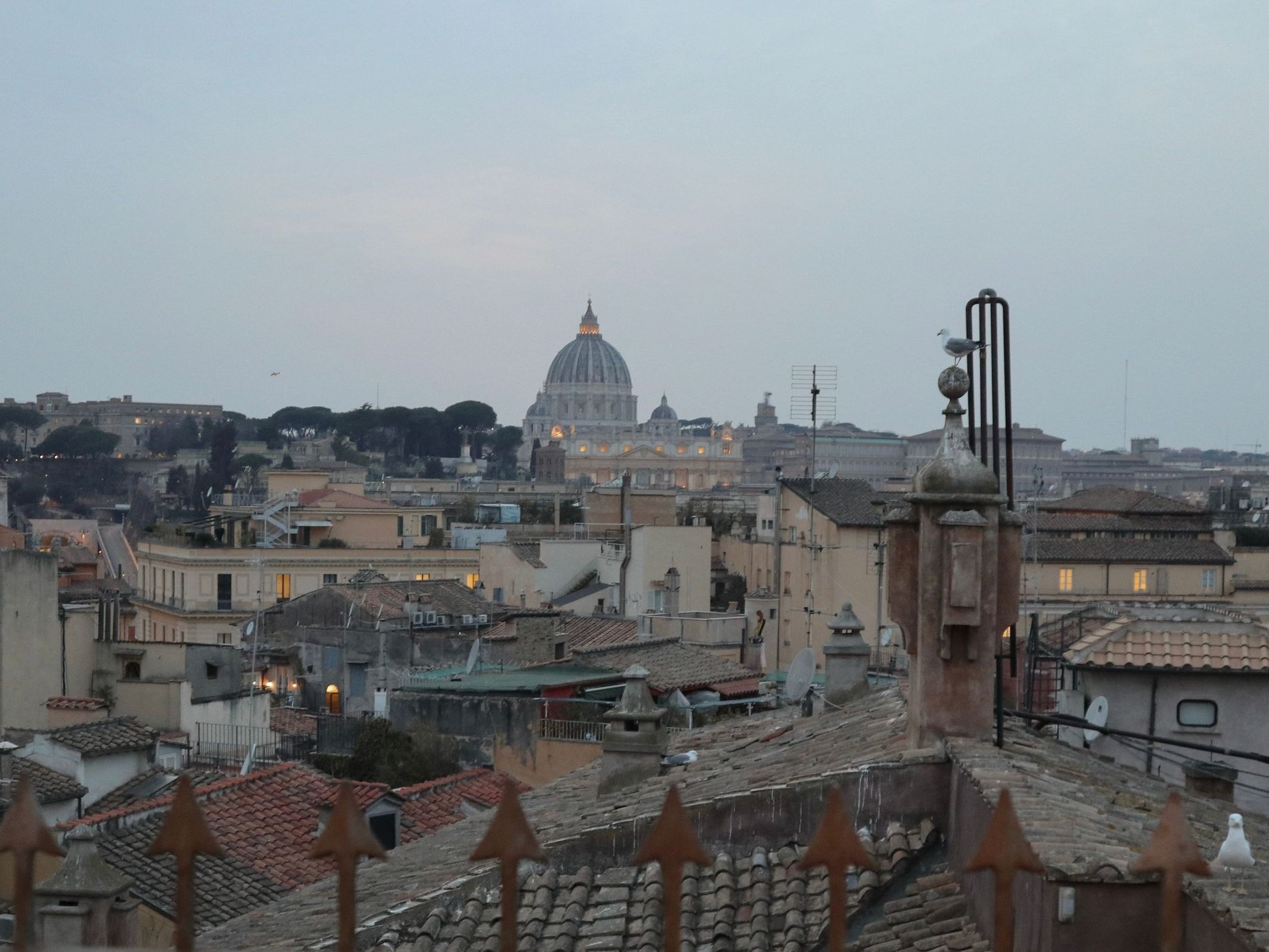 Views from the terrace at the Palazzo Taverna.

We stood right in front of the gates of the private Palazzo Taverna almost waiting for something to happen, nothing quite did. Turns out, we hadn’t arrived yet. As a small door creaked open, flights and flights of stairs welcomed us into what can only be described as Rapunzel’s tower. However, not even the most magical of fairytales could prepare us for what we were about to find on top of the tower. Once there, we were above everything, above Rome, above the ancient gods, above the Eternal City and most importantly, above the sun. Some say we caught it just at the end, I say we caught it right in time. The moment we reached the terrace, the sun was slowly hiding behind the horizon as Apollo waved his last goodbye and ended another day. In the crimson sunset the youngest of the Born in Roma family, Coral, greeted us while Rome itself smiled at the view.

Coral, as you might imagine by now, is inspired by the flaming sunset basking the Roman city. It’s Rome at dusk. It’s born out the exact moment where the sky slowly darkens, day approaching evening, the city momentum shifts. Like a true Roman, we meet her on a terrace for the evening and as the sky suddenly transforms we discover her in the mythical architecture that is bathed in its signature coral orange glow. This is the Roman golden hour. As for the scent, it’s just as breathtaking as the inspiration behind it. Described as a fruity floral trail, traditionally this would evoke daytime moments, but the balance of the notes with woody counterbalance allow the fragrances to travel through Valentino’s chapters — colour, cool, couture — and evoke the last dying breath of the day in a scent that is meant to be the start of a perfect night. 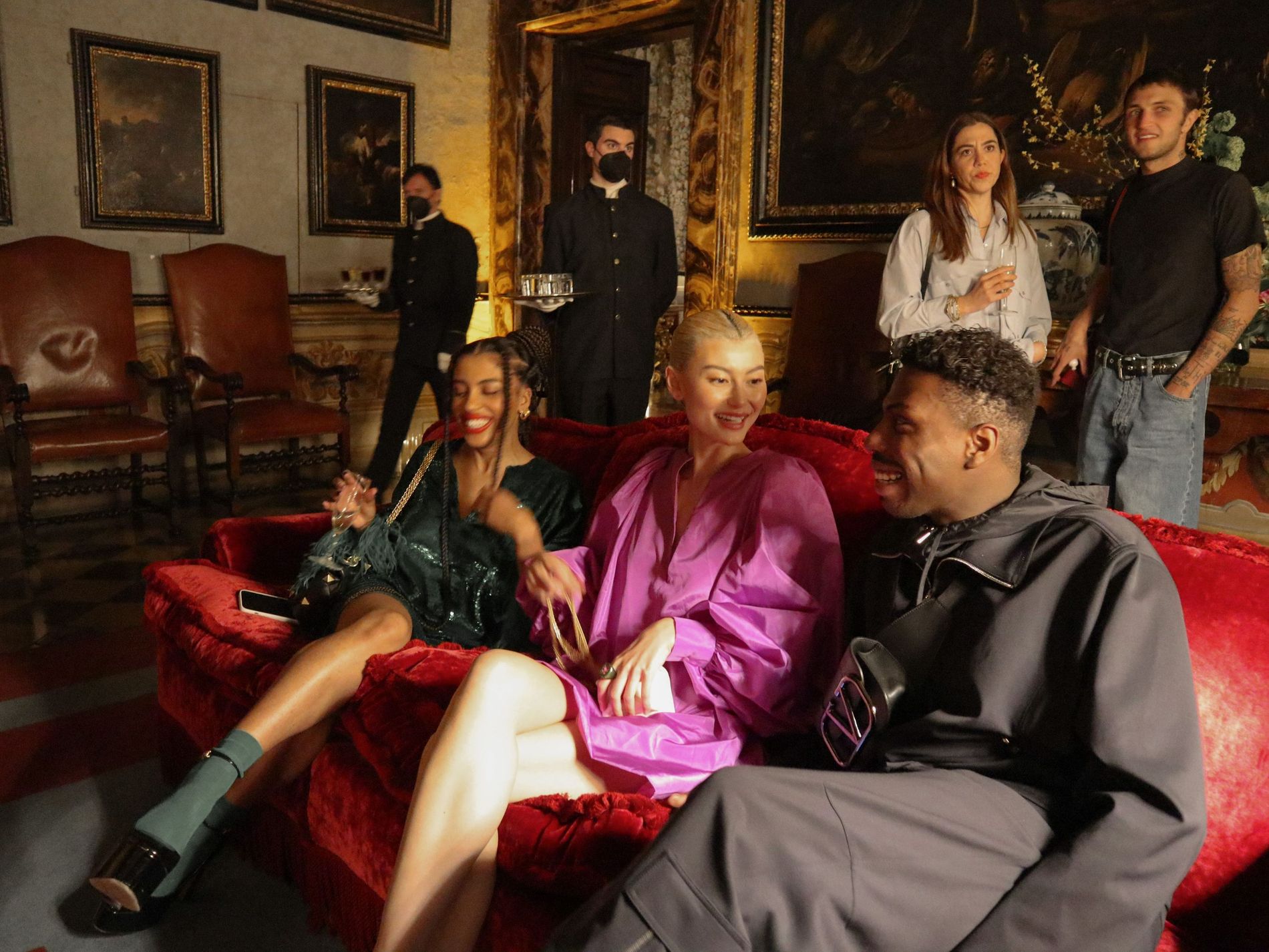 All fun and laughter at the private dinner and after party at the Palazzo Taverna. 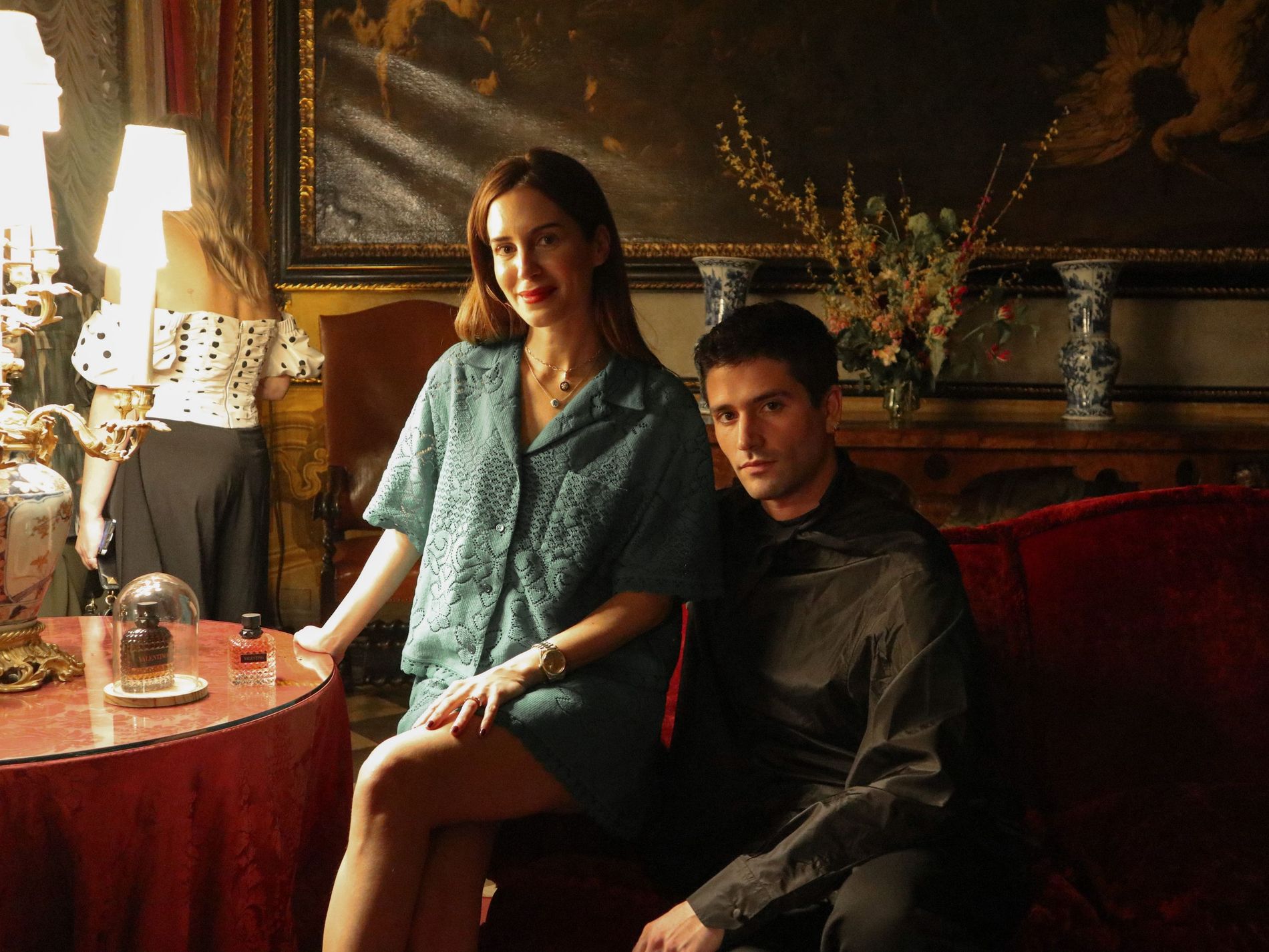 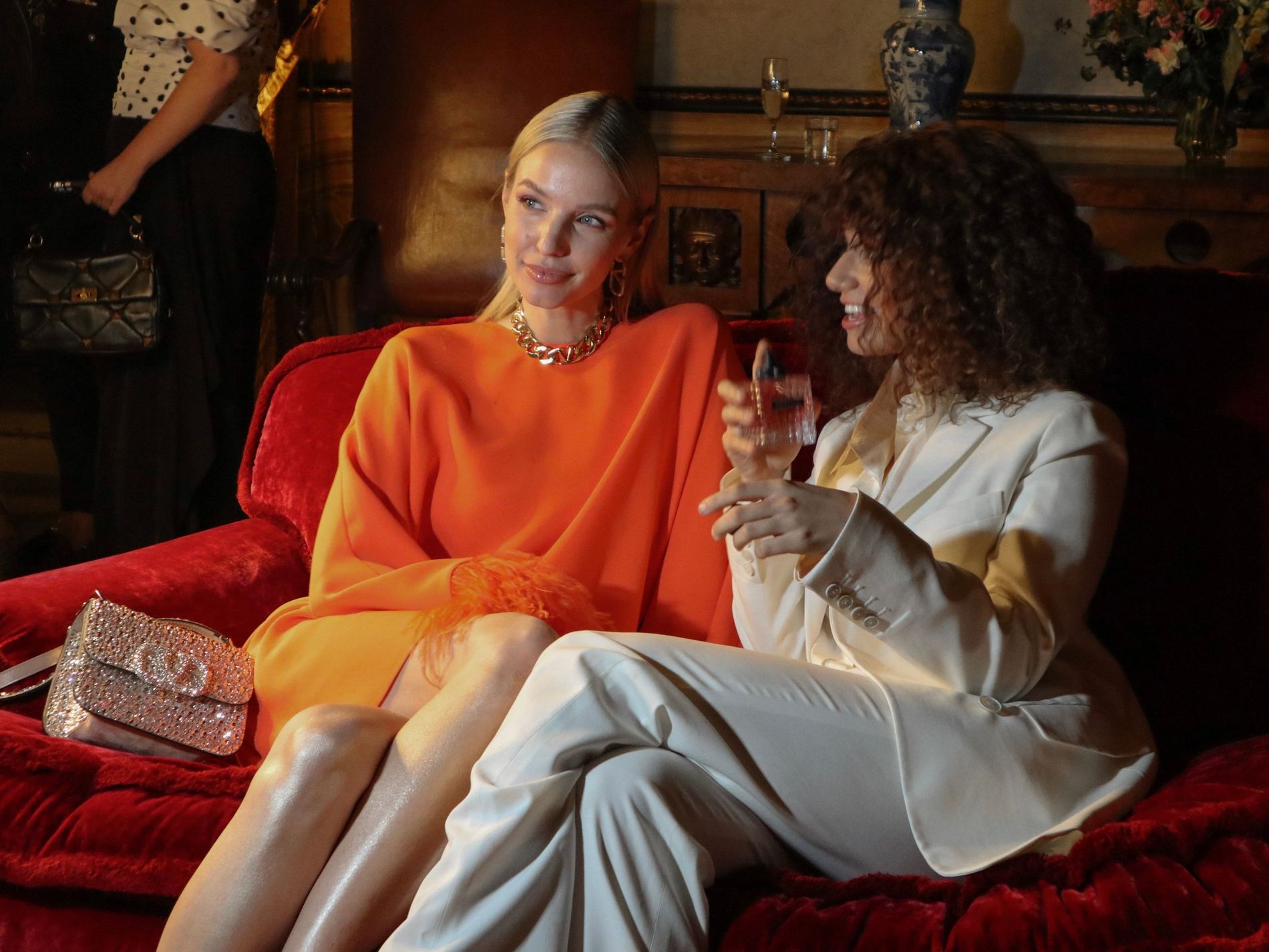 Leoni Hanne at the end of the night.

After descending from the terrace, we found ourselves at the entrance of a magical candlelit palace that would host moments later a plethora of delicious dishes, drinks, dance and laughter. Basked in the opulence of an aristocratic home, we cheered the day away and gave into the magical experience that is existing in Rome. I would love to tell you more, but I’m afraid my time was done and the night itself just blurs out into a dream — a Valentino, Roman dream; as I for 24 hours was also born in Roma.