The only woman in the halftime entertainment, Mary J. Blige brought a touch of femininity thanks to her head-to-toe Peter Dundas look

In America it doesn’t get bigger than the Super Bowl. Football’s annual championship is America’s biggest sporting event and a coup de gras for the musicians who take the stage during its halftime show. Watched by more than a hundred million people, the mini-concerts that fill the space between intervals have become the place where performers unveil their most outlandish and innovative spectacles. After iconic solo sets by Madonna, Beyoncé, Prince, and more, this year’s game features a coterie of music legends, chief among them the Queen of Hip-Hop Soul herself: Mary J. Blige. The only woman in a lineup that includes Snoop Dogg, Kendrick Lemar, Eminem, and Dr. Dre, Blige adds a touch of femininity to the proceedings. More than that, the always chic star gives the night its fashion moment thanks to a one-of-a-kind body suit, thigh high boots, and hat combination from Peter Dundas. 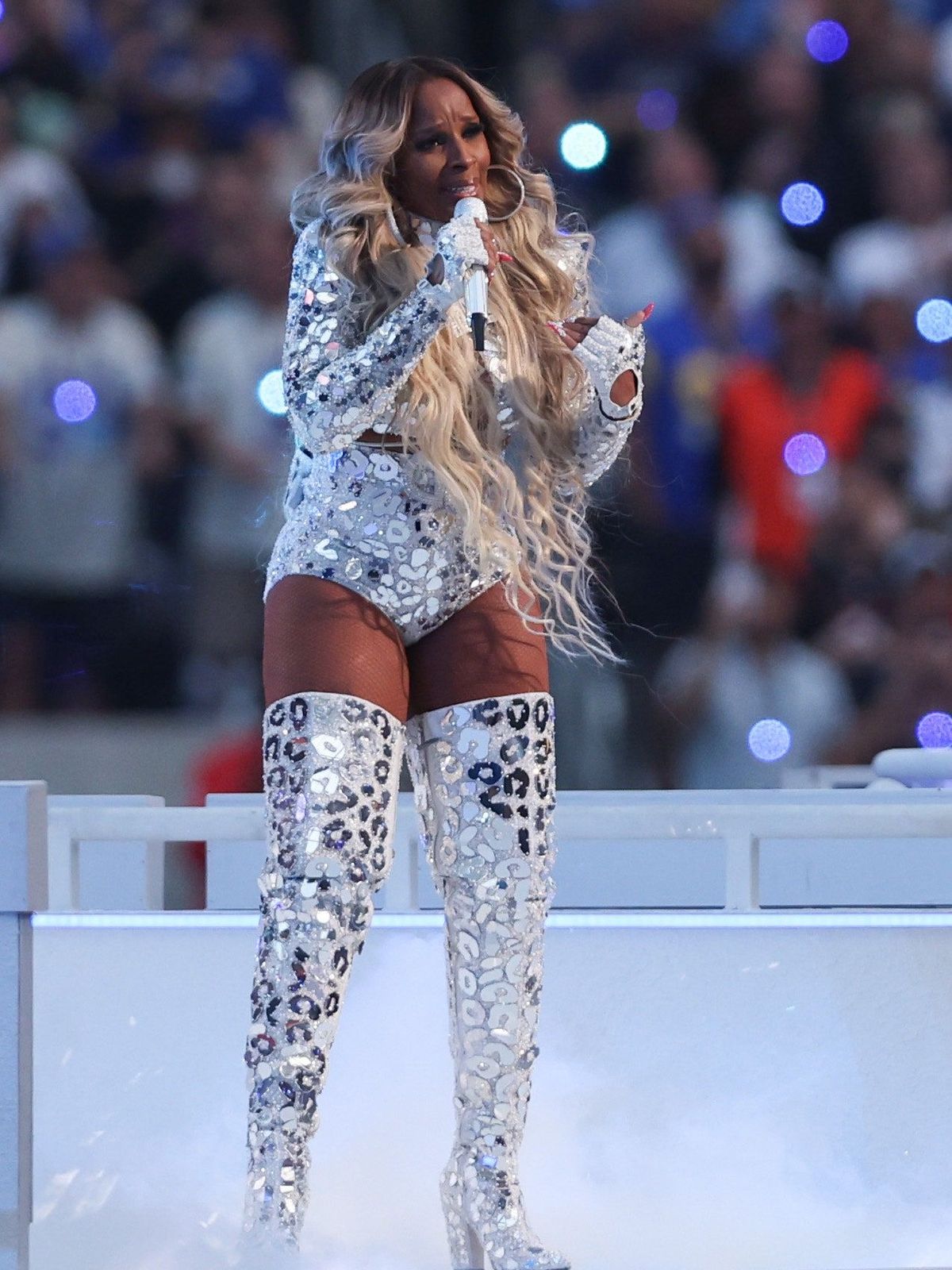 Dundas is already a Super Bowl MVP. In 2020 he created the slinky sequin mini-dresses and lamé short-shorts worn by Shakira during her electrifying set with Jennifer Lopez. For the Norwegian-born Los Angeles-based designer, collaborating with Blige, an artist whose music has served as a soundtrack for years, felt fitting. “I’ve had so many important life moments where her songs were playing in my ears, we all have,” he shared via Zoom from Los Angeles. “Mary pulls at your heartstrings; she’s able to capture so much in her lyrics, then she sings them with such passion. I wanted to create something that could reflect what she’s about and make her feel her absolute best.”

To do that, Dundas considered the hallmarks of Blige’s public persona and wardrobe. In her decades-spanning career, she’s taken on a variety of looks, from the baseball jerseys and doorknocker earrings of her What’s the 411? era to the grownup glamor seen in her latest video for “Good Morning Gorgeous.” Working with Blige’s longtime stylist Jason Rembert, the designer took a deep dive into her fashions and found some recurring themes. “With celebrities, especially icons like Mary, I think about their signatures. Creating [custom pieces] for them is similar to being a creative director at a luxury house in that you need to understand the existing DNA before you can truly begin,” explains Dundas. “We’ve included my signature lacing and embroidery within the look, but this is Mary as seen through a Dundas lens. She loves to shine and wear cream, she looks great in them, and they worked with the staging too.” 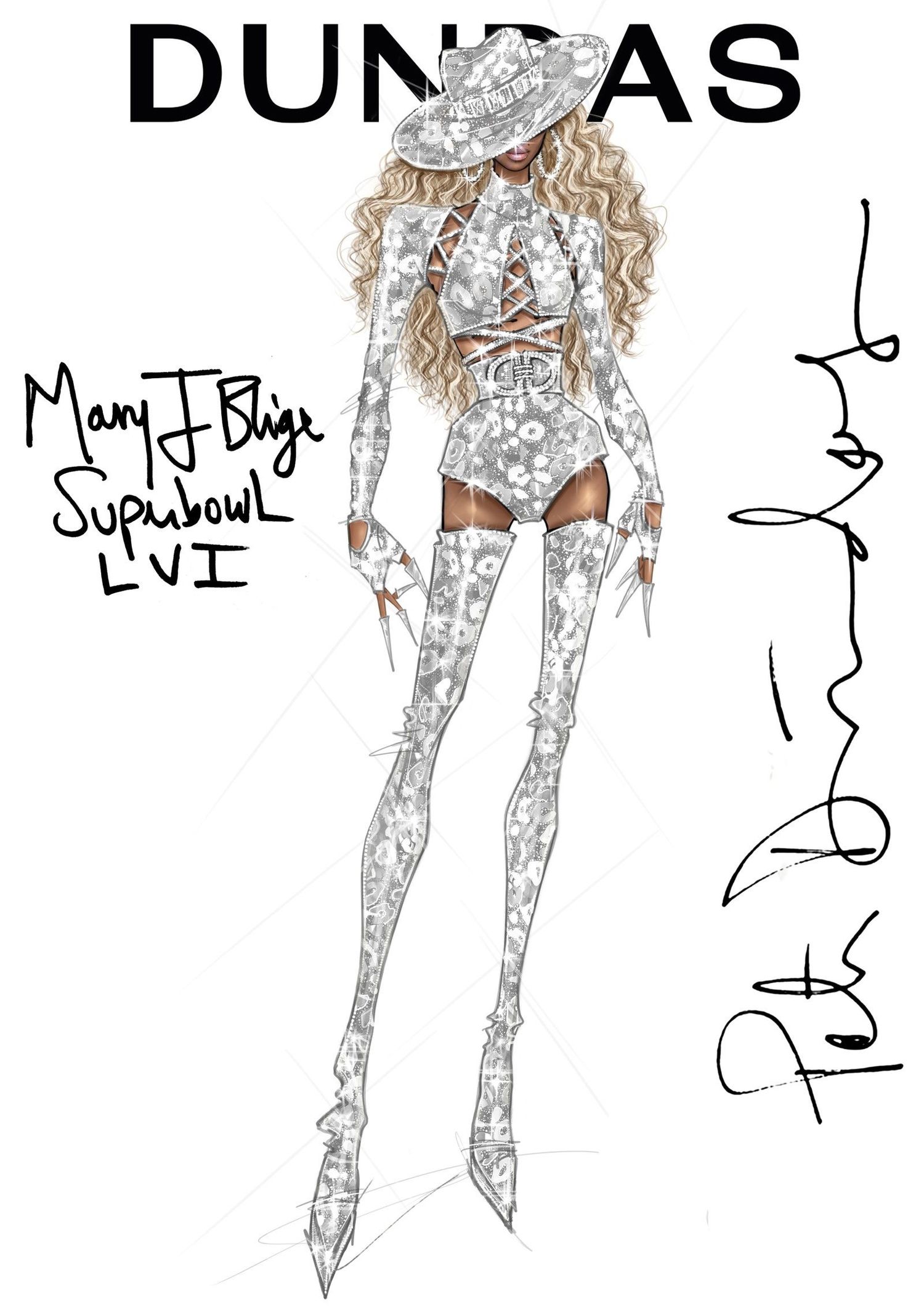 The spontaneous nature of Blige’s performance style was also a factor. “Mary moves a lot, but her movements are impulsive,” says Dundas. “You’re always thinking about choreography and quick changes. Some artists plan every step, but Mary sings from the heart and reacts in the moment. The costume has to be able to do anything that she needs.” Having created pieces for the stage throughout his career, Dundas was up to the task. “We launched with Beyoncé’s, so this represents a great deal of what we do,” says Dundas referencing the star’s 2017 Grammy’s medley, where she wore the first piece from his eponymous collection. “When we began discussions, Mary said to me that she might do ‘this or that’ during her performance, so [at that time] there wasn’t a set plan regarding dance. The ambiguity makes things more challenging, but it’s a welcome challenge.”

While workshopping ideas, Dundas looked to luminaries from art and music. The effortless elegance of jazz bandleader Cab Calloway immediately came to mind as did the monumental sculptures of French artist Niki de Saint Phalle. “Calloway had this unapologetic glamor that I feel connected to,” says Dundas. “His outfits always had these flourishes, especially in Janet Jackson’s ‘Alright’ video where he has a cameo. It’s an iconic moment, and his look there is a little extra, but that’s what you want for the stage.” Dundas was inspired by Saint Phalle’s world renowned Tarot Garden, a cartomancy-inspired sculpture park in Pescia Fiorentina, Tuscany that opened in 1998. “There is a lot of shine, which I’m very into right now,” says Dundas. “I drew from de Saint Phalle’s sculptures of women where she uses mirrors, and that motif was perfect for Mary because she’s able to reflect our emotions through her lyricism.”

The final look alludes with its snow leopard pattern and dramatic vibe alludes to the past, but its introduction is entirely modern; after Blige steps onstage at the game, versions of her outfit and those worn by her dancers will be available as an NFT, a partnership with Dress X. “This is the next step in technology, and I want my fashion to be a part of that,” he says. “[Online] you can be anything you’d want to be, wear whatever you like, and let your imagination travel as far as it can go.”

Of course, there’s one person who won’t need a high-speed connection to enjoy Dundas’s custom creations. “I wanted to look incredible and be comfortable. Fly sexy and hot but comfortable,” shared Blige before the show. “It means so much to perform at the Super Bowl; it’s such a triumph and a win. [This] captured everything; the colours that I love coupled with the sparkle that I’ve grown into.”