Manfred Theirry Mugler has died. He was 73. Though he stepped away from fashion in 2002, the designer remained an outsize figure in the industry and his early designs have been discovered by a new generation of power women. After seeing Mugler’s work in the Costume Institute’s “Superheroes” exhibition in 2008, Beyoncé commissioned tour costumes. More recently, his show-stopping looks have been sought out by the likes of Cardi B. and Kim Kardashian. The latter commissioned a custom “wet look” by Mugler for the 2019 Costume Institute Gala. 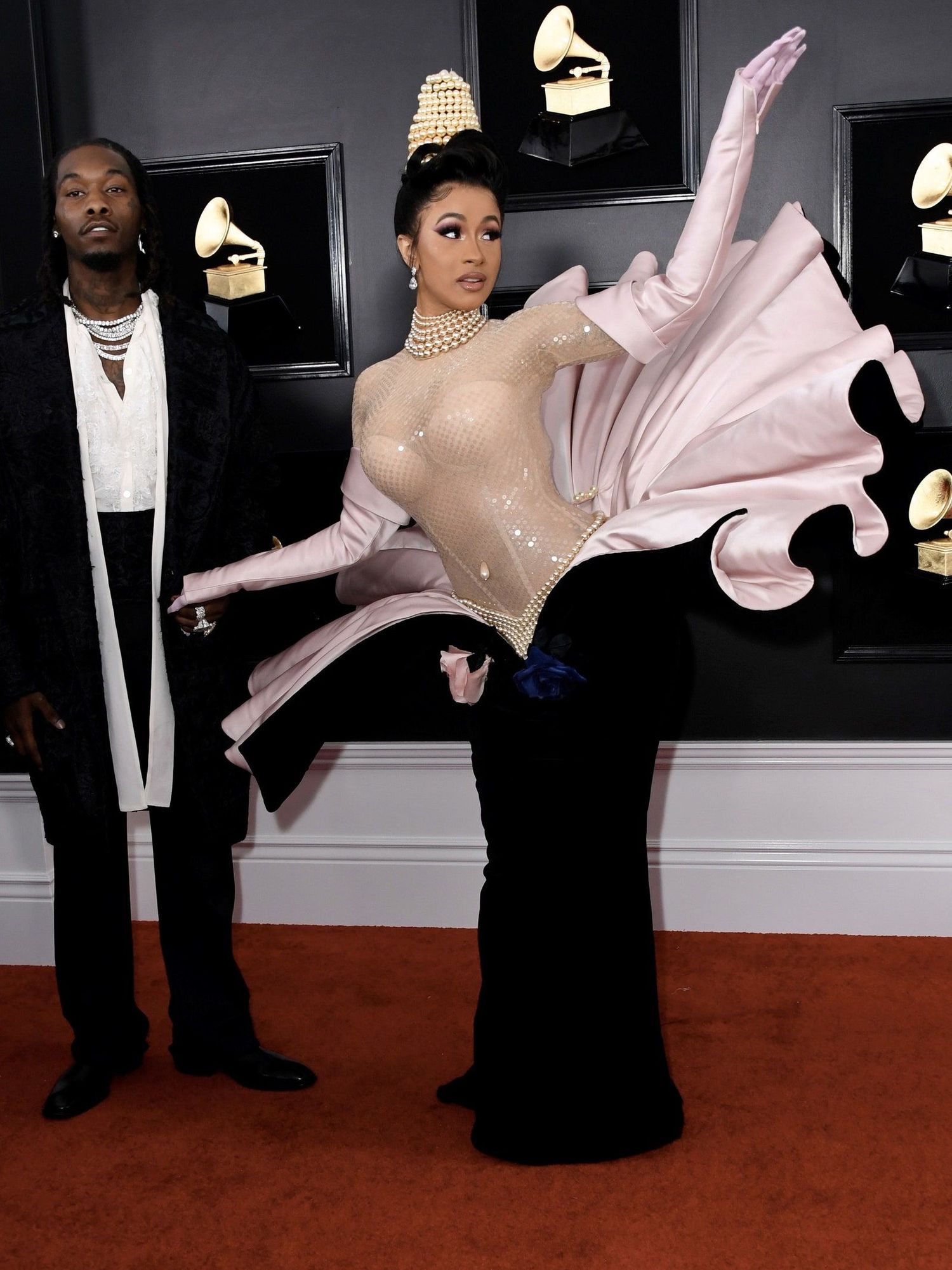 Cardi B in Mugler at the 2019 Grammy Awards. Photo: Getty 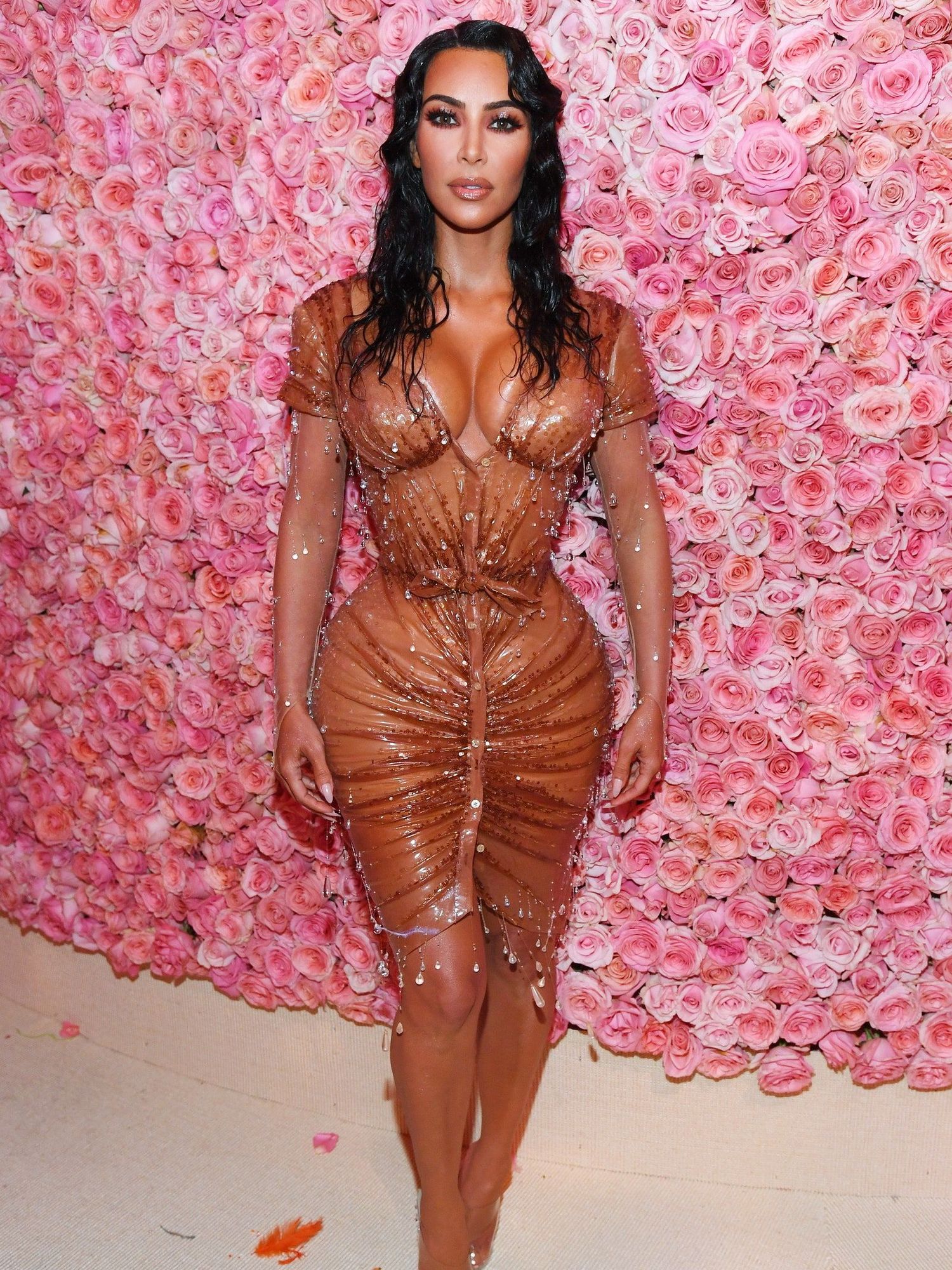 Kim Kardashian in Mugler at the 2019 Met Gala. Photo: Getty

Strength and display were the pillars of Mugler’s work. His archetype was an Amazonian woman, commanding and in command, but still with a sense of humour and flirtatiousness. Mugler’s clothing was used in several Helmut Newton shoots for Vogue in the 1980s, and it’s easy to see a synchronicity in the two men’s approach to sexiness, open-ended narratives, and fun.

Mugler’s “type” was the femme fatale, and his preferred silhouettes were the inverted triangle with exaggerated power shoulders and the defined hourglass shape. The idea of the wasp waist took on new dimensions when he imagined his models as insects for his spring 1997 haute couture. In other collections Mugler presented women as robots, motorcycles, and even clams, but he could also see them as goddesses and angels. In one instance a pregnant Pat Cleveland, as the Madonna, was famously lowered onto the runway from on high. 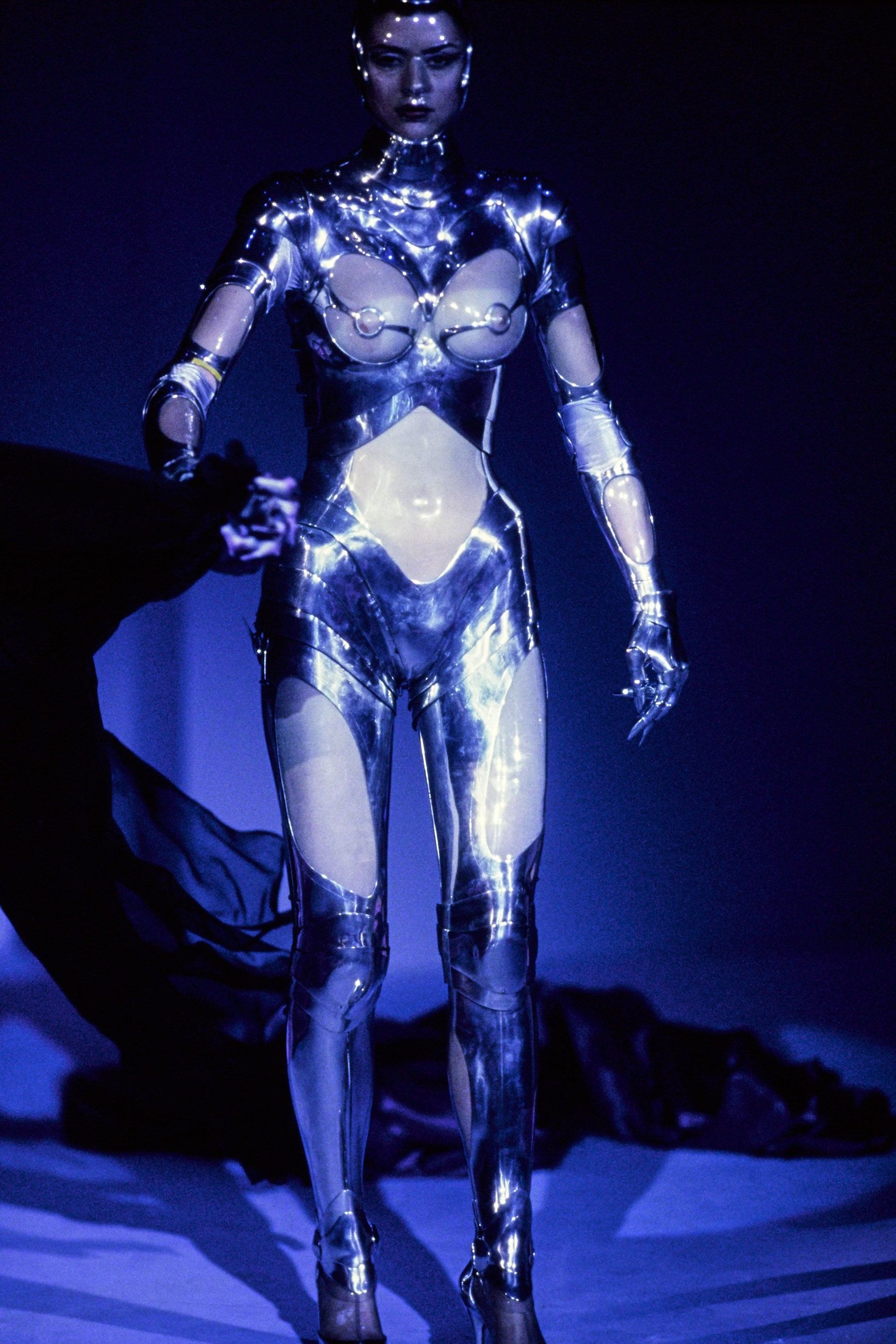 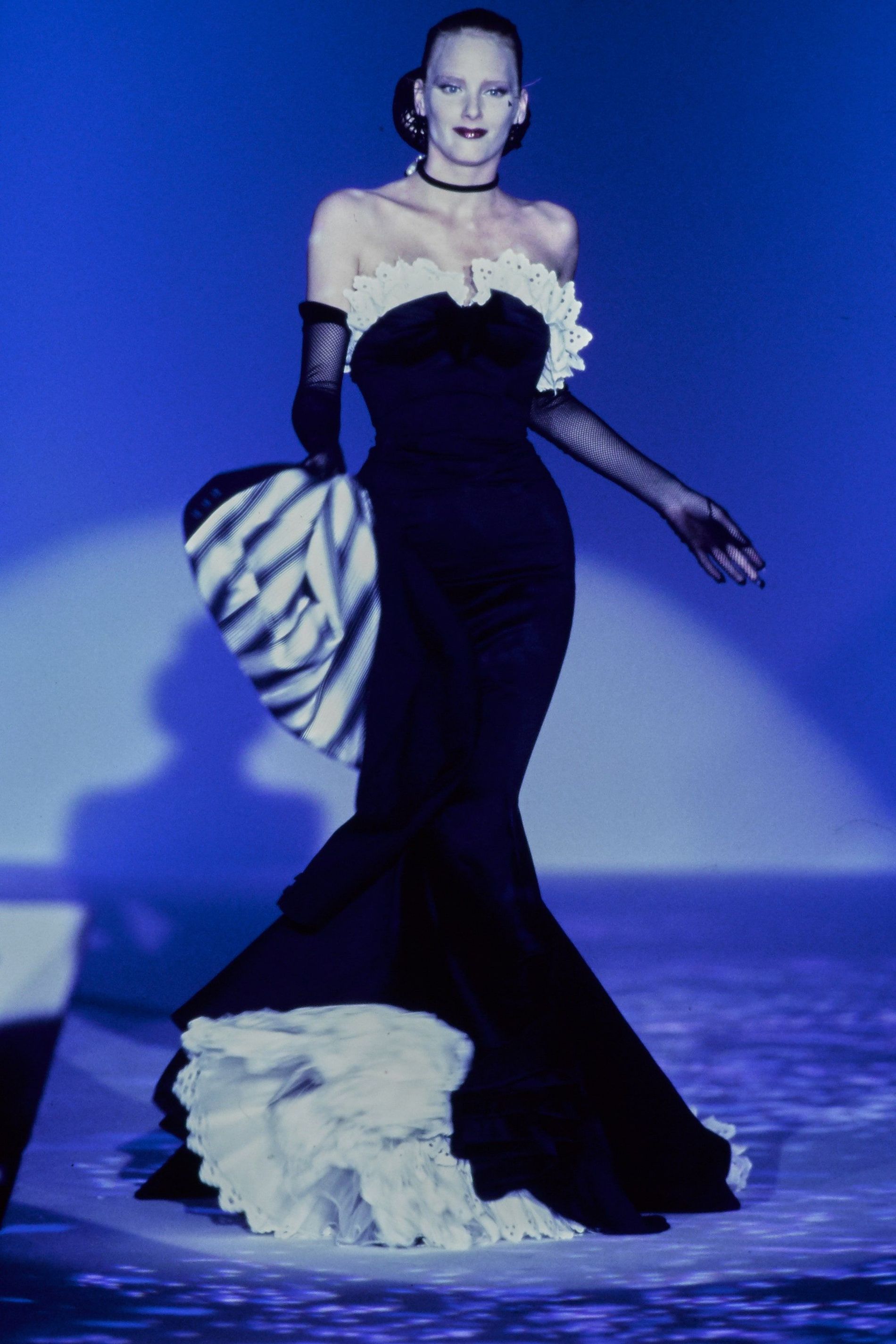 Born in Strasbourg in 1948, Mugler studied at the School of Fine Arts and danced with the opera there. He made the leap to Paris in 1966, where he worked variously for other designers and as a photographer. He showed his first creations in 1973 and founded his namesake label the next year, and he quickly became known for the forcefulness of his cuts and vision. Here’s how editor Mary Russell, writing in Vogue in 1977, first introduced Mugler to readers:

“Thierry Mugler is a loner. He will take off for Africa or India for months at a time, alone, with one pair of jeans in a sack. An ex-dancer with a completely individual feeling for shape and colour, he uses his sense of theatre and ballet to work out the themes for his shows. The clothes, however, can be pulled apart and, when seen on racks in his showroom, are the most sage and real pieces one could ever want. For his new boutique on La Place des Victoires, he designed the mannequins and jewellery—everything very luxurious but brut (gold threads in rough linen, for example). Thierry and [his fellow designer] Claude Montana speak to each other every day but never discuss a collection.” 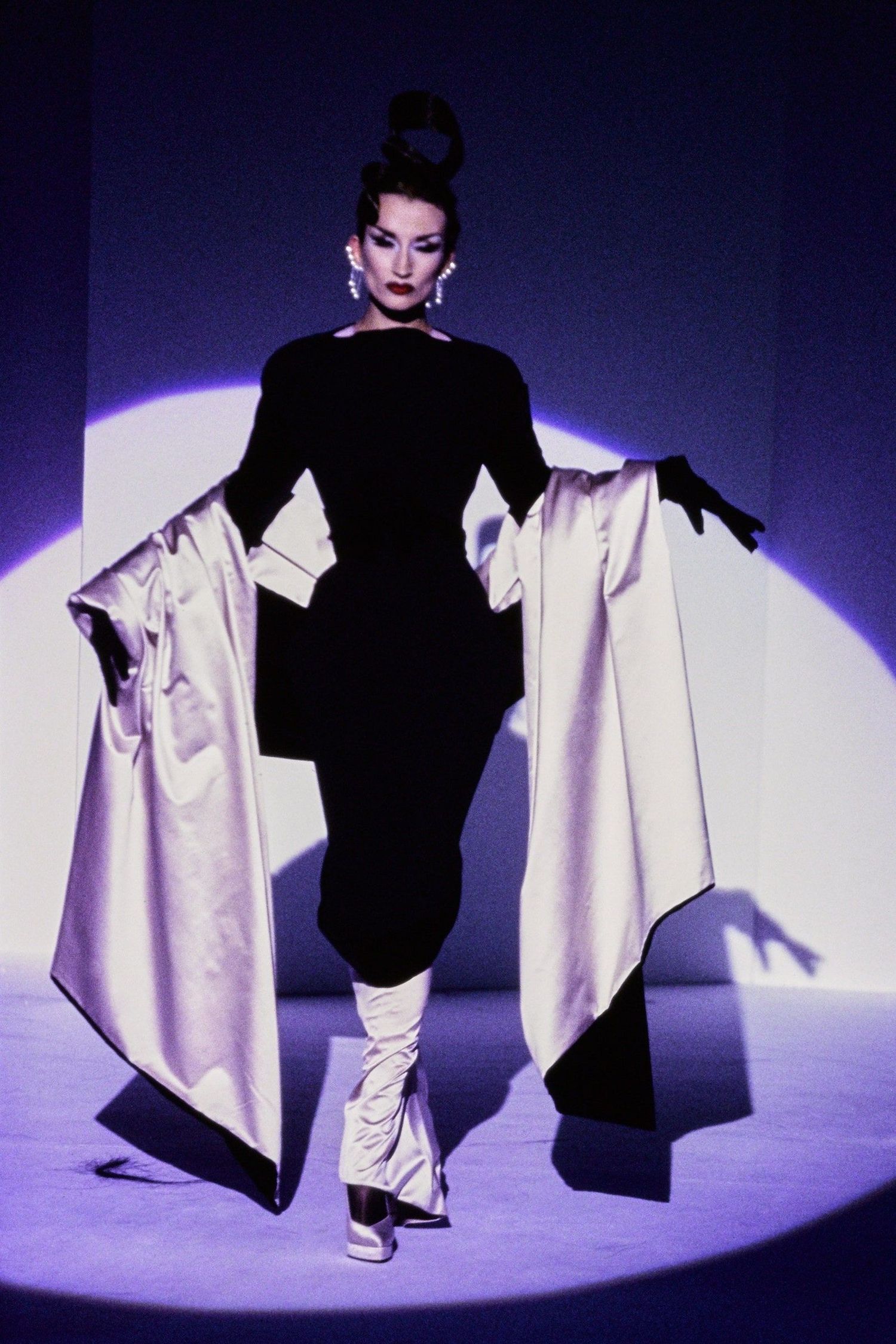 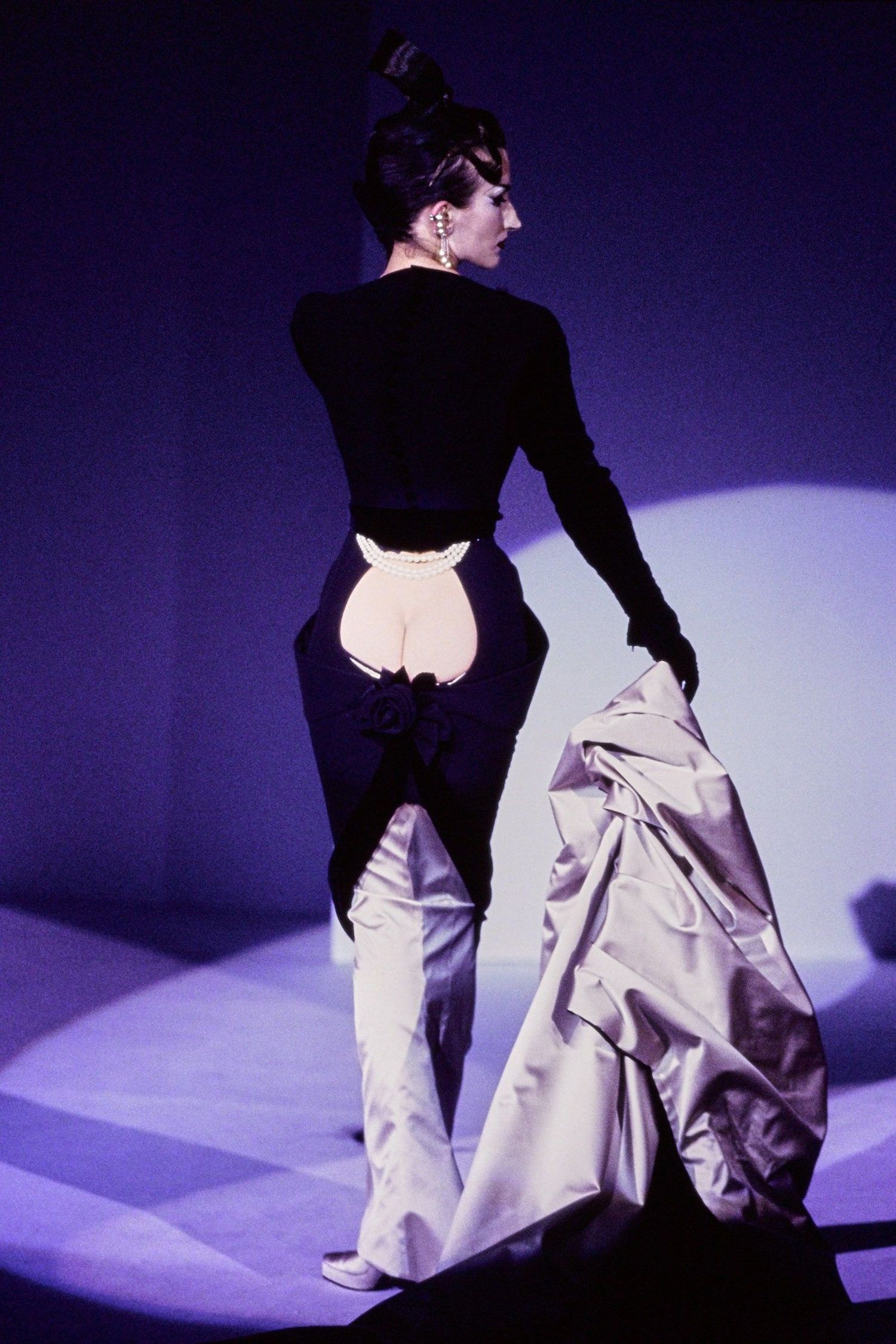 In sync with the body-consciousness of the 1970s and ’80s, physicality was an important aspect of Mugler’s work, though he was equally preoccupied with craft and materiality. Even in photographs it’s possible to see how Mugler took control of fabric, cutting and twisting it to his will. His most extreme looks, like the motorcycle dress, are almost engineered; indeed Vogue once praised his “scalpel-cut and aerodynamic details.” Mugler used his prodigious skills to take fashion into other, fantastical realms; and in various media.

According to The New York Times, Angel, Mugler’s best-selling fragrance, is “credited as the first gourmand scent because of its unusual foodie components.” The perfume was launched in 1992, the same year that George Michael hired the designer to shoot the “Too Funky” video, a follow up to “Freedom ’90” starring some of the same supermodels. 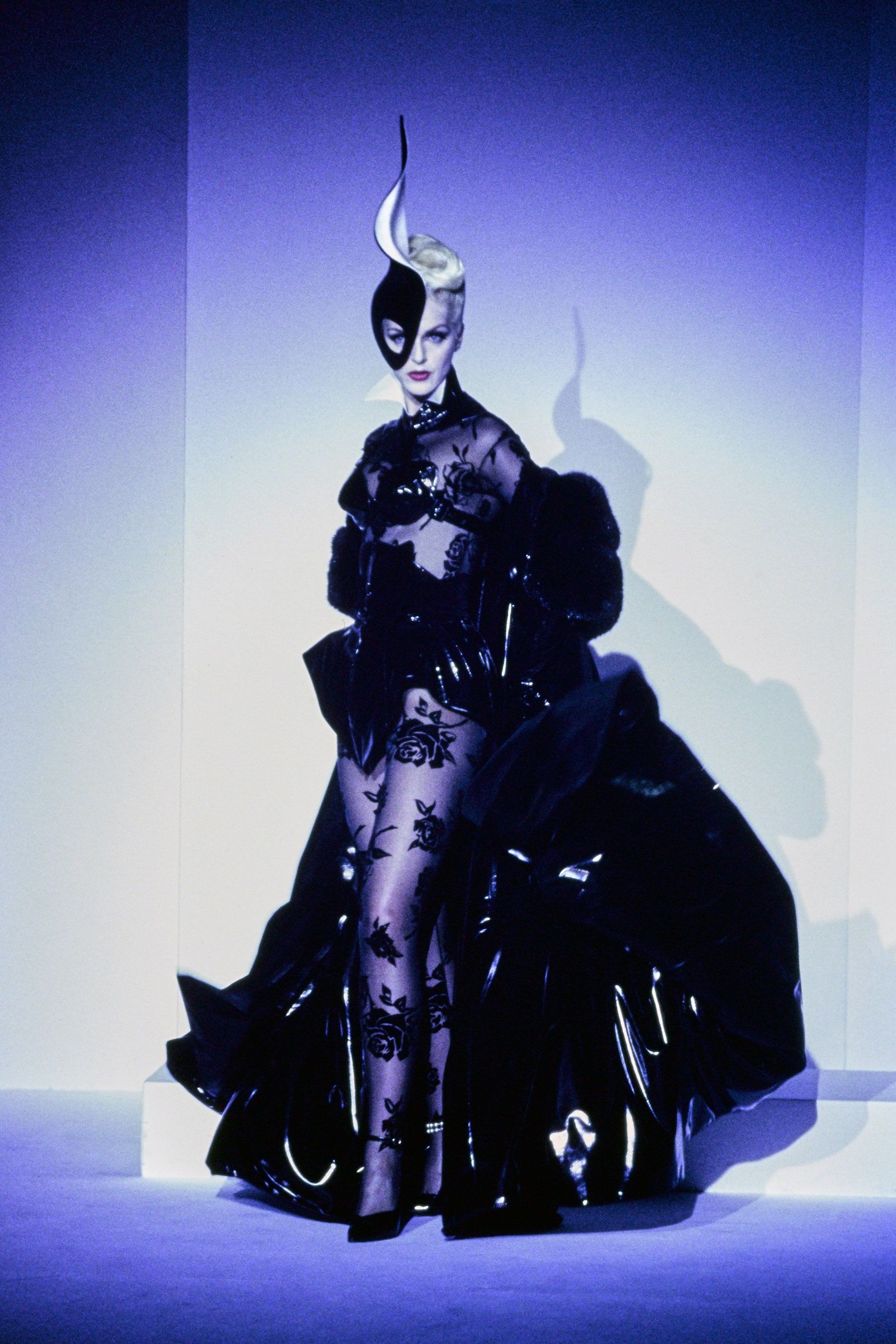 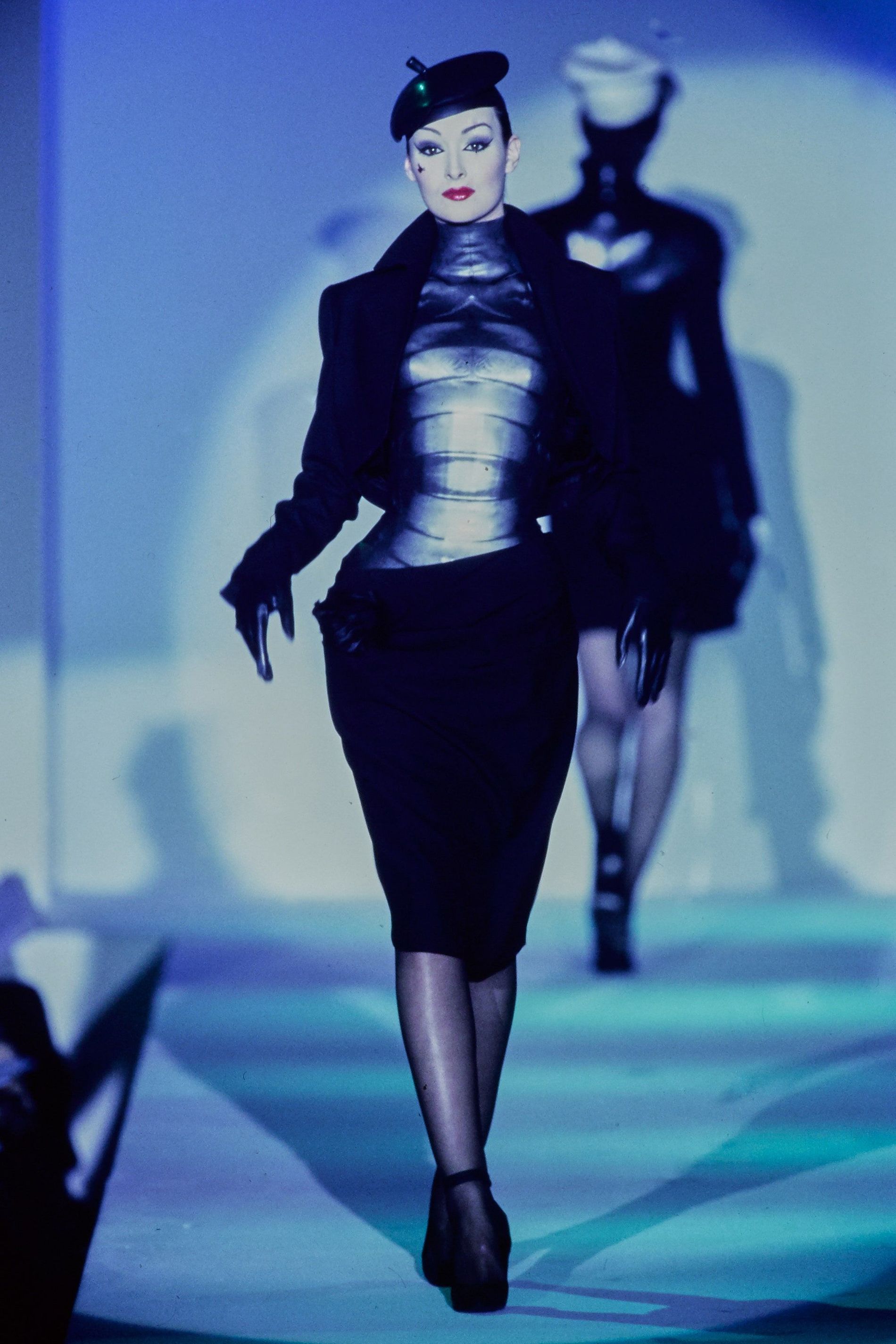 Mugler’s work in fashion intersected with Surrealism, sci-fi, and fetish. Some deemed his work sexist or crossing over into costume (in 2003 Mugler would be hired by the Cirque du Soleil), but it could also be seen as empowering. The expansive possibilities of transformation were important to Mugler’s work, and life. When he stepped away from fashion, the designer went back to using his birth name, Manfred. Through bodybuilding and surgery he altered his appearance.

Having been a performer himself, Mugler understood the necessity of exaggeration for impact (audiences, after all, can’t see details). His shows were full-on theatre, with celebrity castings and performances. Vogue reported that his 1982 ready-to-wear collection was presented in “twenty-two ‘scenes’ in a music-hall-revue style that left an audience clapping in delight.” The most celebrated Mugler outing is his Cirque d’Hiver show for A/W 1995, marking his 20th year in business. 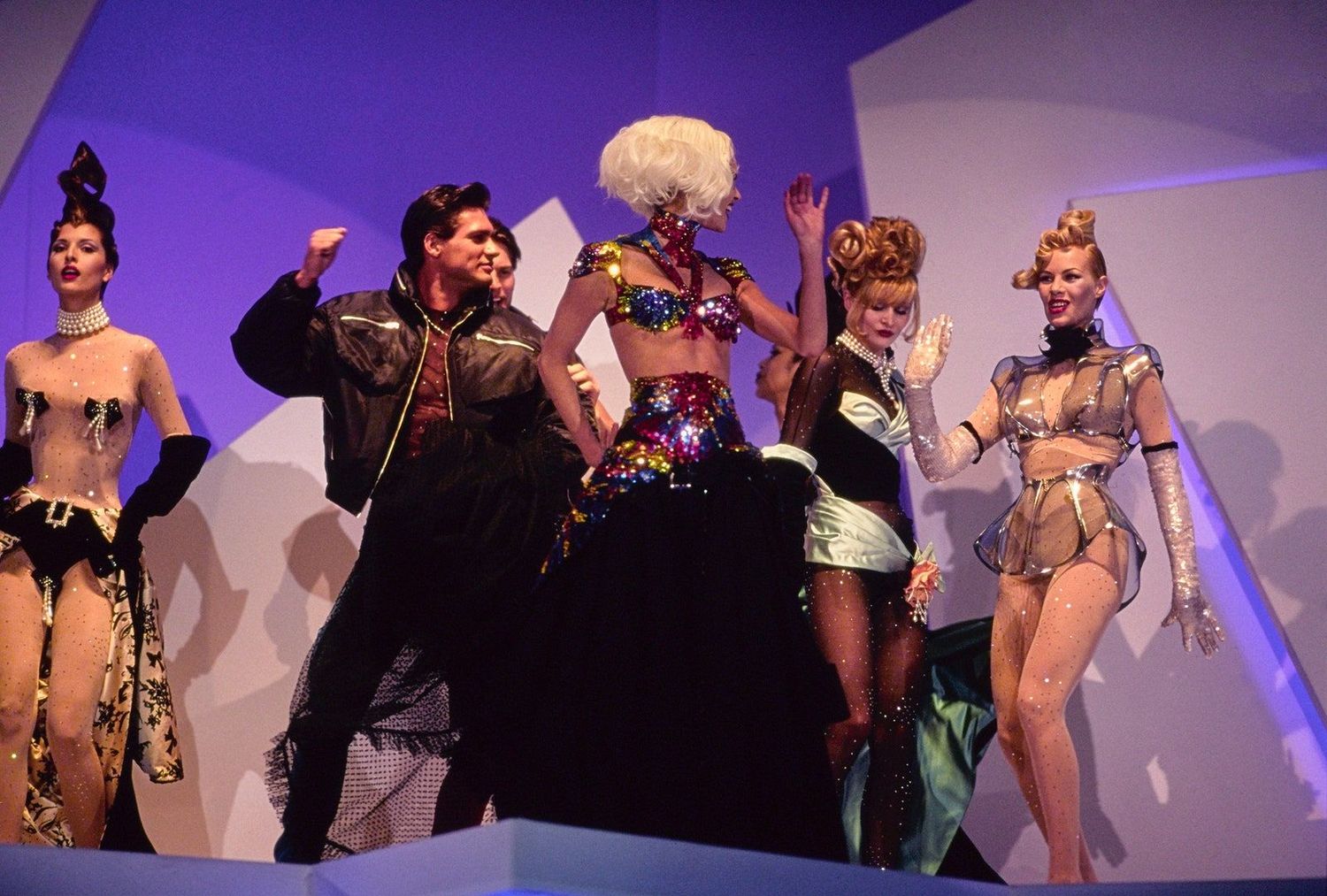 In 2019, 45 years after he presented his first designs under his own name, a retrospective, “Thierry Mugler: Couturissime,” was staged in Canada. It opened at the Musée des Arts Décoratifs in Paris last September. “What he did is so unique; he wrote fashion history collection after collection without knowing it,” said curator Thierry-Maxime Loriot at the time. It’s almost like it’s not about fashion—Mugler didn’t follow trends or reference fashion history. It’s festive and immersive: he created his own world.”

His loss in this one is deeply felt.