The name Cartier may conjure up connotations of long-established luxury and timeless elegance, but that doesn't mean the famed French jeweller is afraid of innovating or moving with the times.

We saw this in 2019, with the launch of an androgynous campaign for Clash de Cartier. And again amid the lockdowns of summer 2020, when its high-jewellery collection (SUR)Naturel masterfully engaged with gender fluidity, creating hybrid designs inspired by the marriage of flowers and animal species, a theme continued in the animal-inspired bangle collection Les Indomptables de Cartier (“The Untamable”) in April of this year.

Related: “It takes around 3000 hours to make a single piece of jewellery”: Step behind the curtain at Cartier

Most recently, Cartier’s Beautés du Monde collection, of which chapter one was shown in Madrid and chapter two in Paris, claims the entire world as its subject matter, thrusting the brand fully into an embrace with global diversity. The inspirations are eclectic and expansive. Butterfly wings, snakes, iguanas, coral reefs, seashells, aquatic flowers, stained-glass windows and architecture all feature. 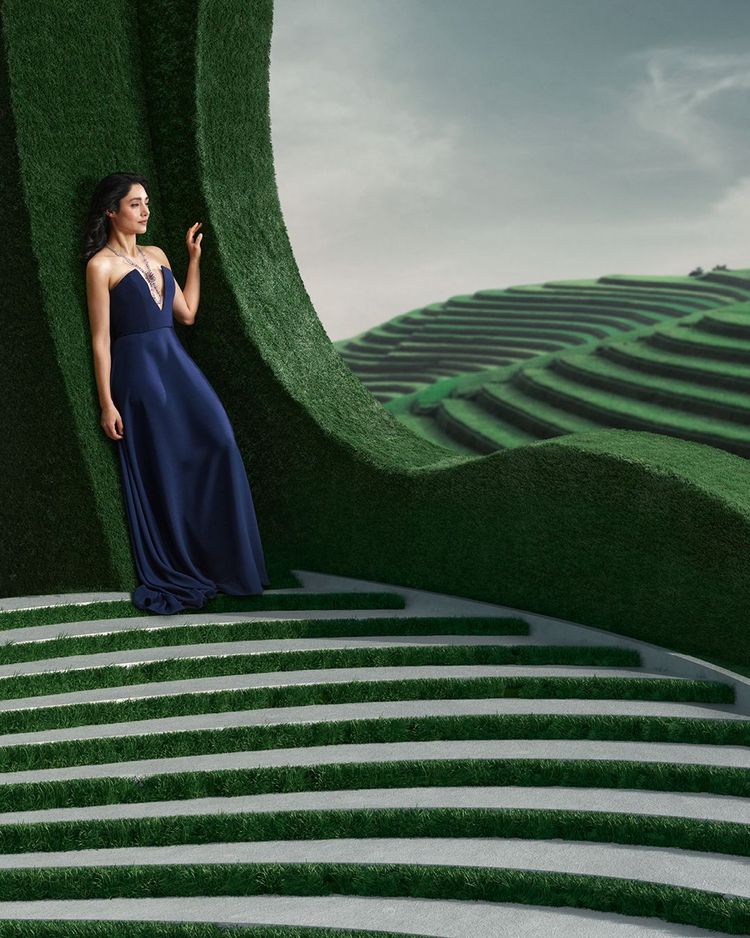 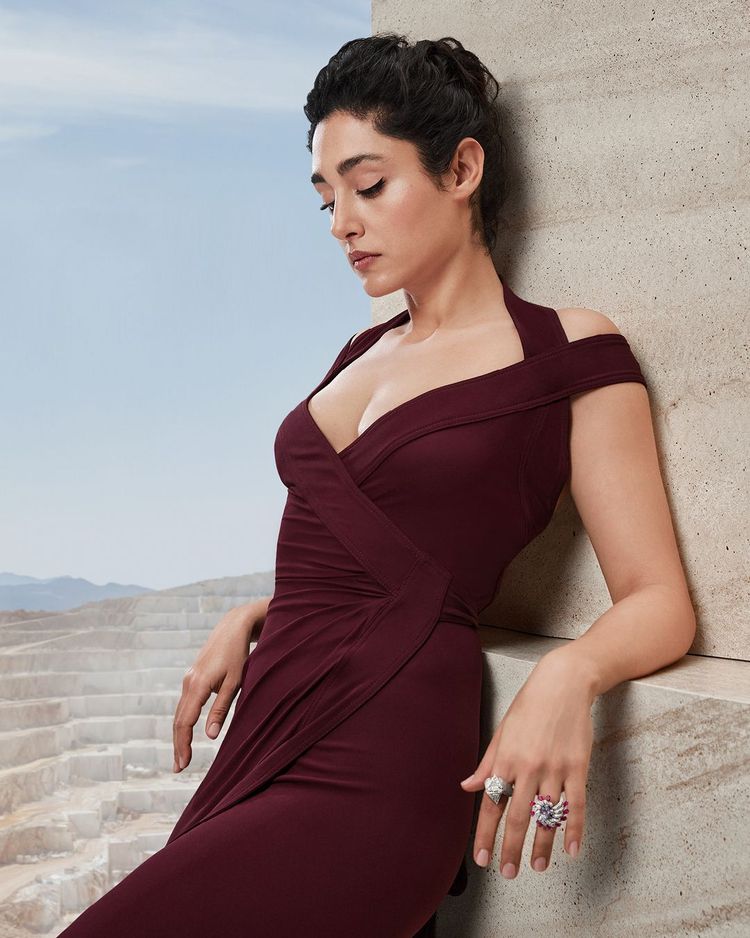 In truth, this approach is nothing new for Cartier. The Maison was built around the vision of appreciating the world’s diverse treasures. As a great art lover and collector, Louis Cartier embraced the splendours of traditional Russian, Islamic and Asian aesthetics. He had an extensive collection of Persian miniatures, along with an array of Japanese and Chinese artworks: lacquers, prints, inro (small cases worn hanging from a cord from the obi of a kimono), incense boxes, mirror boxes, pipe boxes and writing boxes.

Related: This is the jewellery our Vogue editors wear every day

He celebrated emblematic figures and motifs from Persian, Indian, Asian and Egyptian art pieces, architecture and the decorative arts and imparted his passion for global art to his grandsons. Louis-Joseph (1875-1942), Pierre-Camille (1878-1964) and Jacques-Théodule Cartier (1884-1941) also travelled the world, observed and drew inspiration from it, bringing sketches, notes and photographs back to their designers in Paris.

Take a closer look below at the new Beautés du Monde collection.

Inspired by butterfly wings' many shades and iridescent beauty, this necklace's three Australian opals convey its vivacity and brilliance, framed by geometrical motifs composed of diamond bars, orange sapphires and blue sapphire beads in an abstract composition. A display of shimmering colours that evoke the idea of the most marvellous of insects from far and wide. 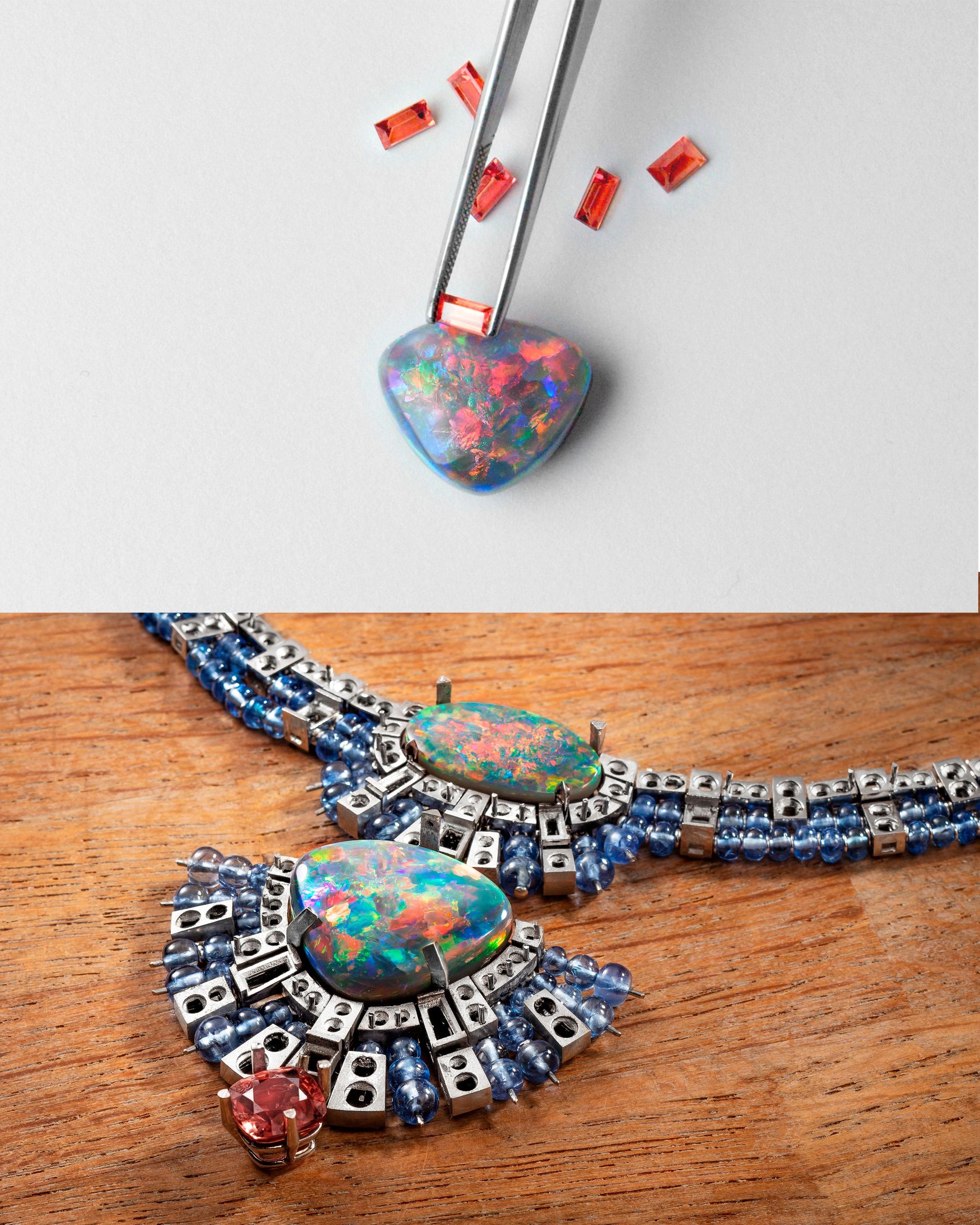 The skin of the green iguana inspired Cartier’s design studios to create the Iwana necklace in diamonds and emeralds. Everything is based on the suppleness and subtle sinuosity of the setting, which evokes the shifts and motion of the animal’s skin. The piece is built around the three spectacular Colombian emeralds weighing 43.45 carats, their four-sided cut reminiscent of the animal’s dorsal spines. The meticulous detail and suppleness of the piece evoke the skin of a reptile. 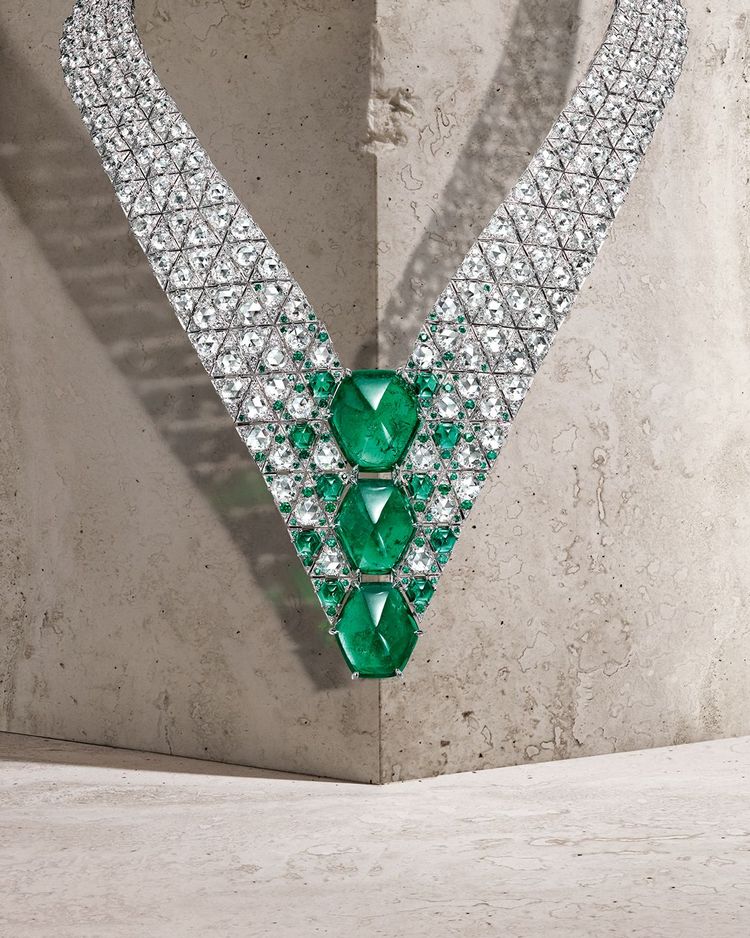 This necklace captures the miracle of an aquatic flower. Its stylised approach to a water lily is set with a 10.61-carat rubellite, around which diamond petals surrounded by onyx unfold, amplifying the impression of volume. 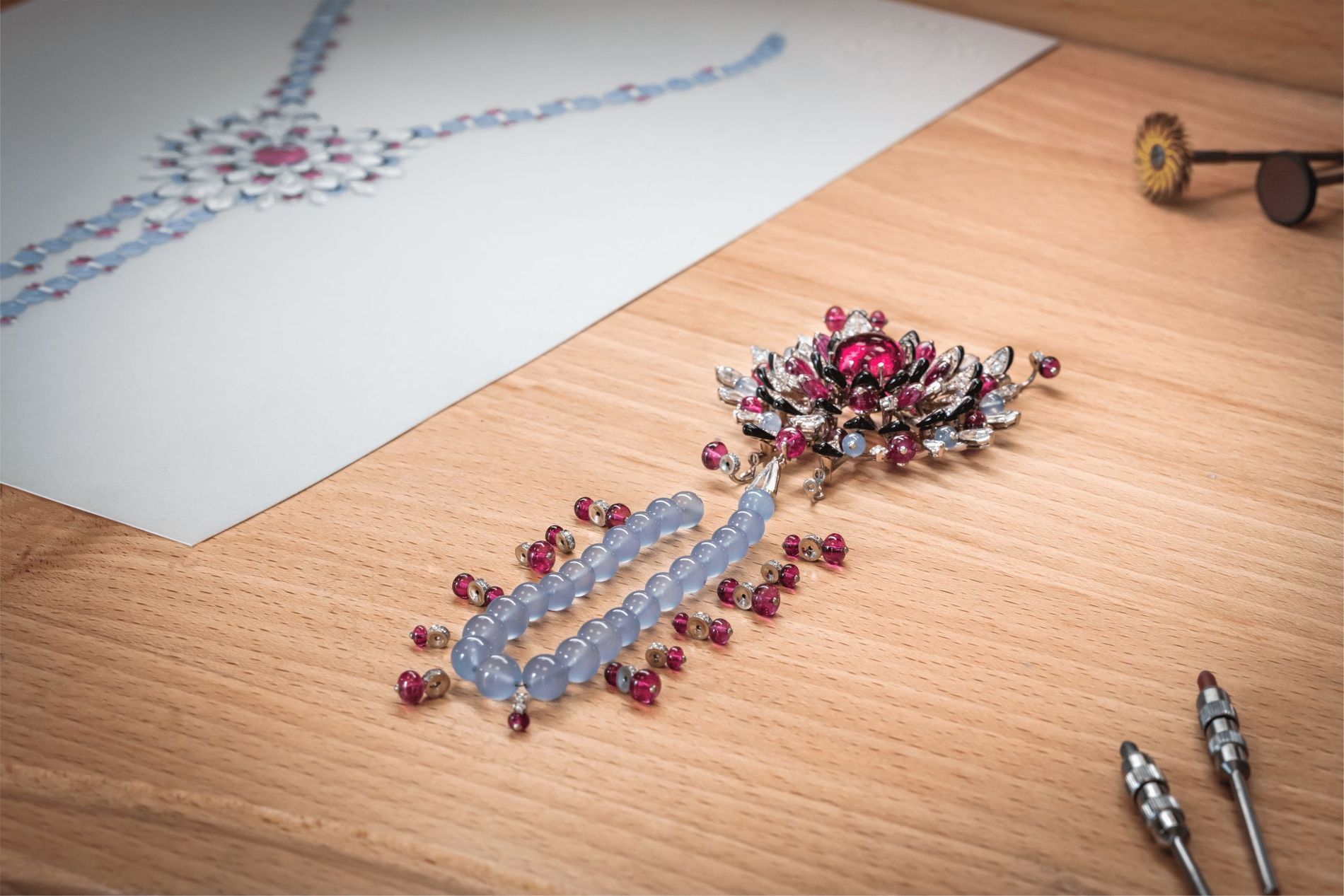 Based on a mythical, powerful, hypnotic snake whose beauty, voluptuous charm and incredible flexibility Cartier enhances through this new interpretation, this necklace strikes a balance somewhere between realism and abstraction. The joints allow the necklace to be completely mobile. Five spectacular Ceylon sapphire cabochons punctuate the body of the necklace with an intense blue. 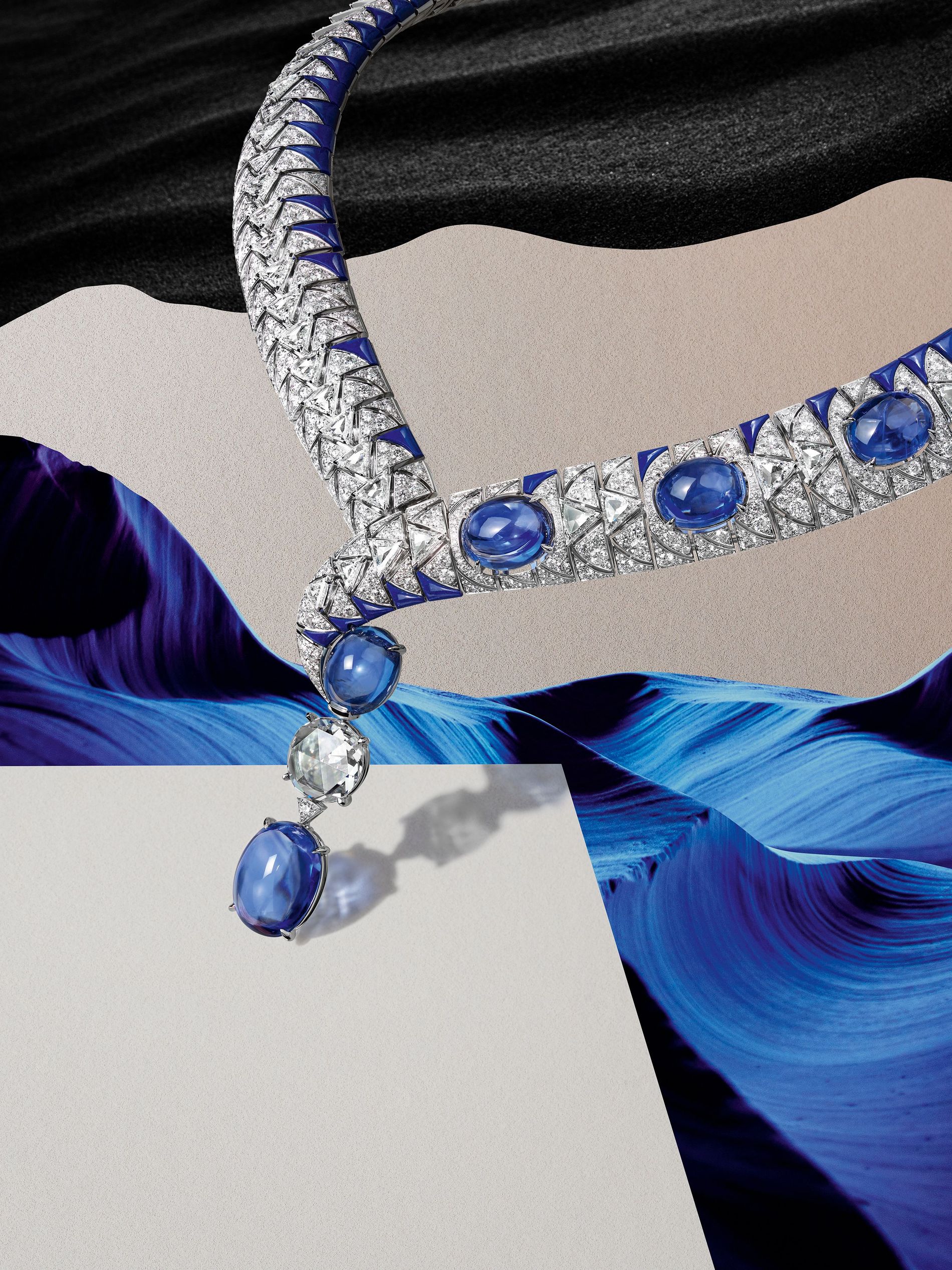 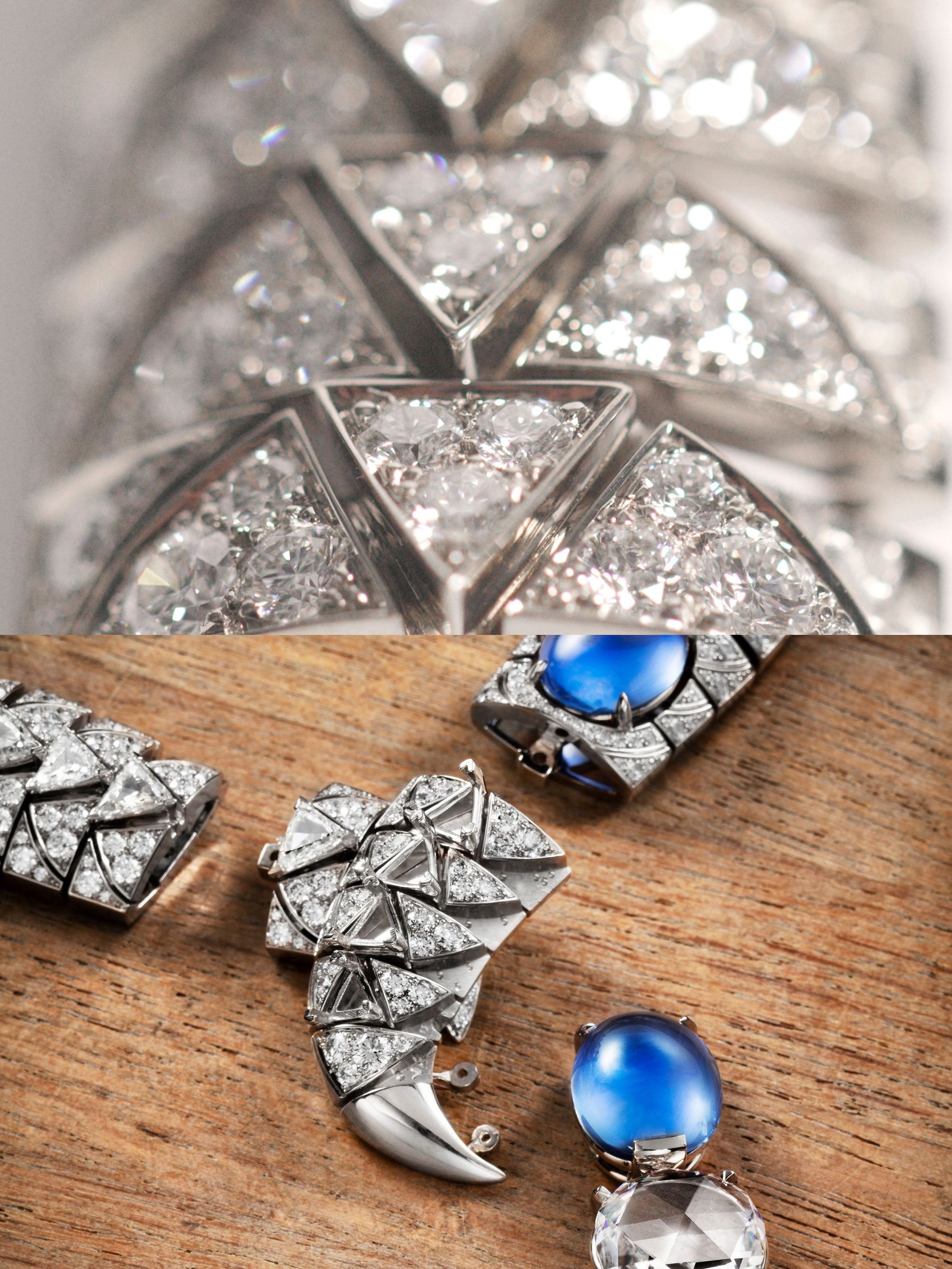 Inspired by the beauty of coral reefs, Cartier evokes emerald and coral contrasts in the form of ribbed beads snaking along a diamond atoll. The rhythm is set by the jeweller’s emblematic combination of colours – the orange of the coral and the green of the emerald. 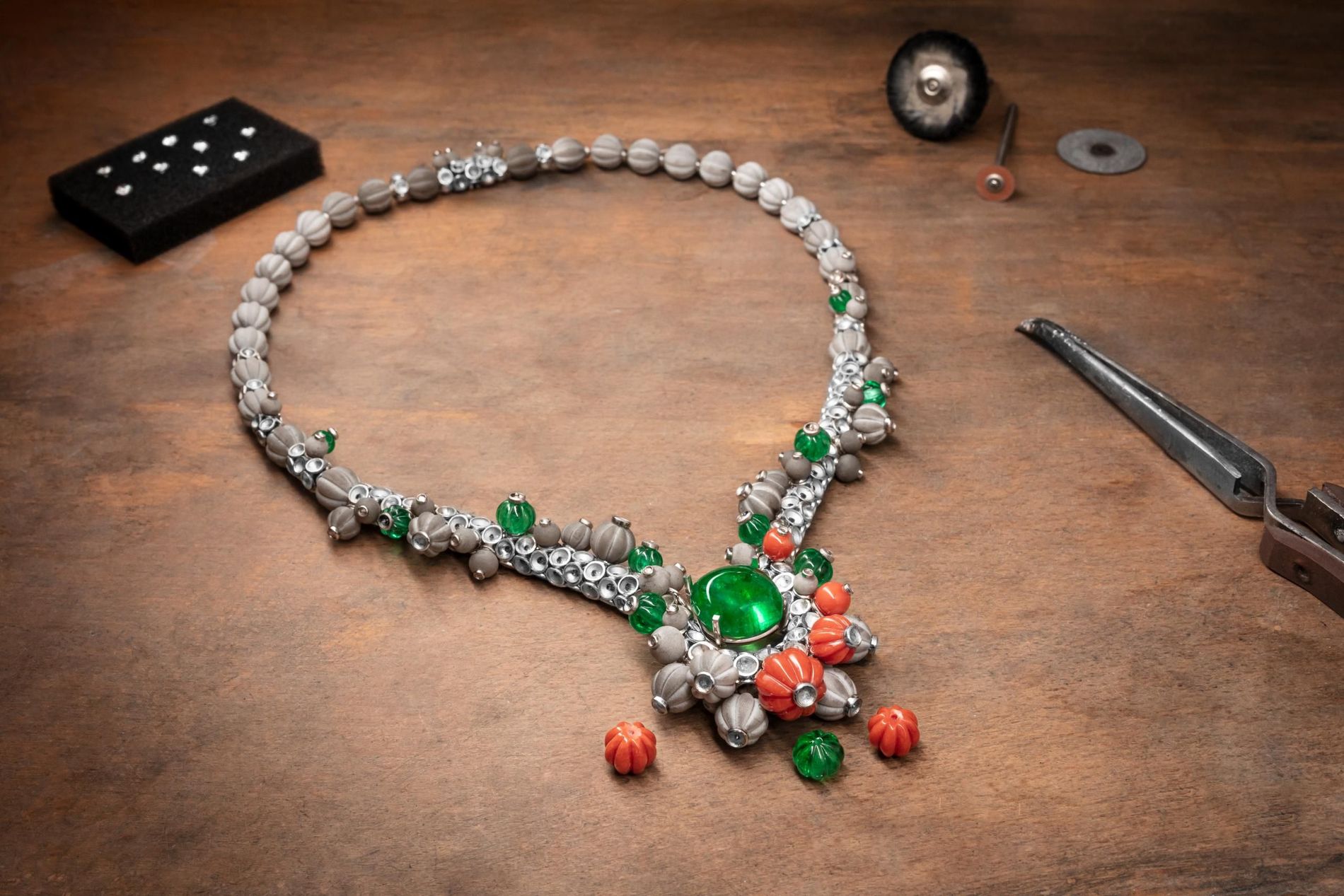 With this piece, Cartier pays tribute to the beauty of embellishments, and more specifically to traditional Mesoamerican jewellery. Composed of a double row of azure chalcedony beads the necklace unfolds to showcase an iridescent constellation of rubies. 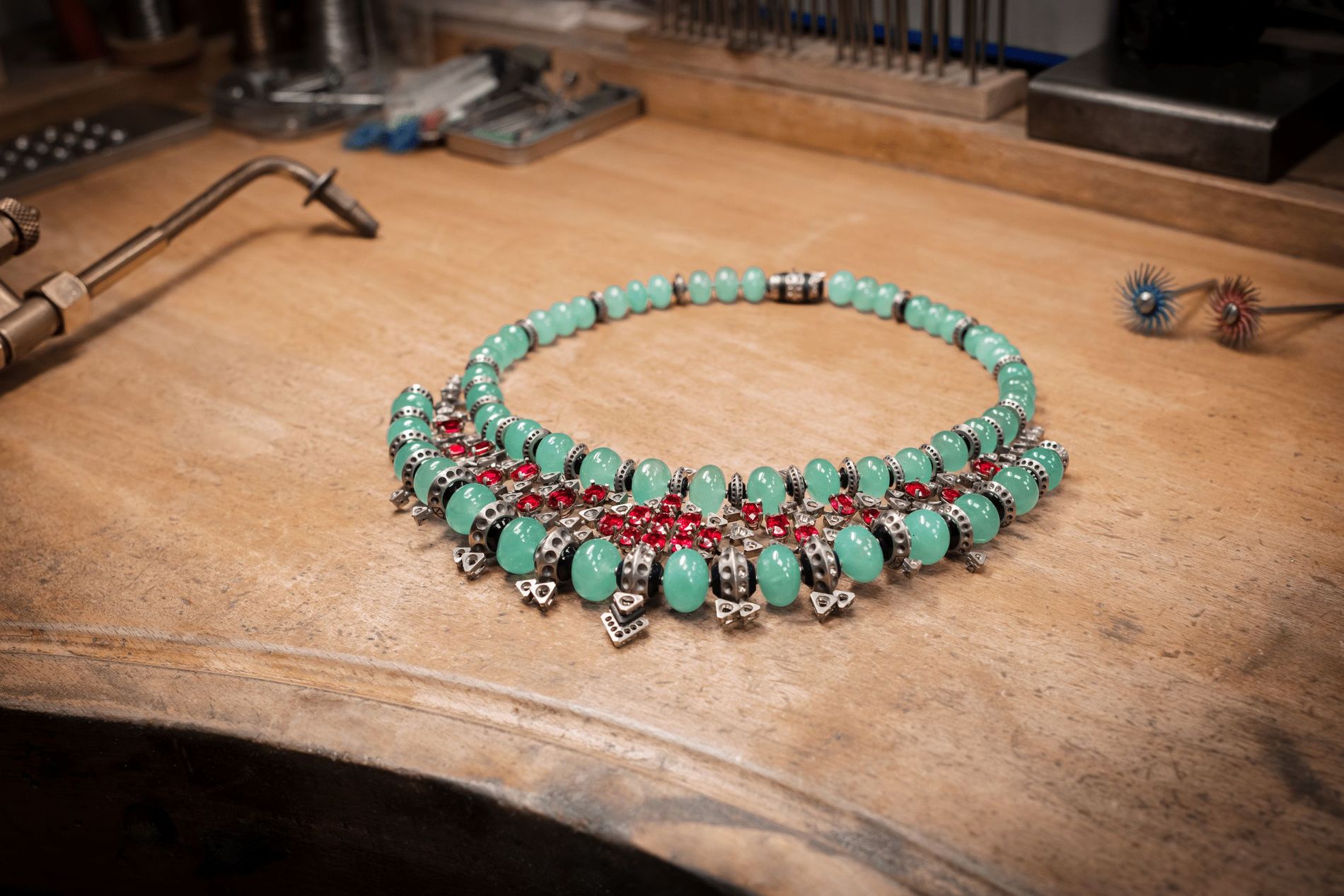 These pieces take the eyes on a journey from the depths of the sea to the far reaches of the sky. It's as if the incredible wealth of the universe is concentrated in each piece, in miniature. Designed as if they were sculptures, they form a family of styles. Together, they cover all the Maison’s major areas of expression: geometry, movement, colour contrasts, flora and fauna. 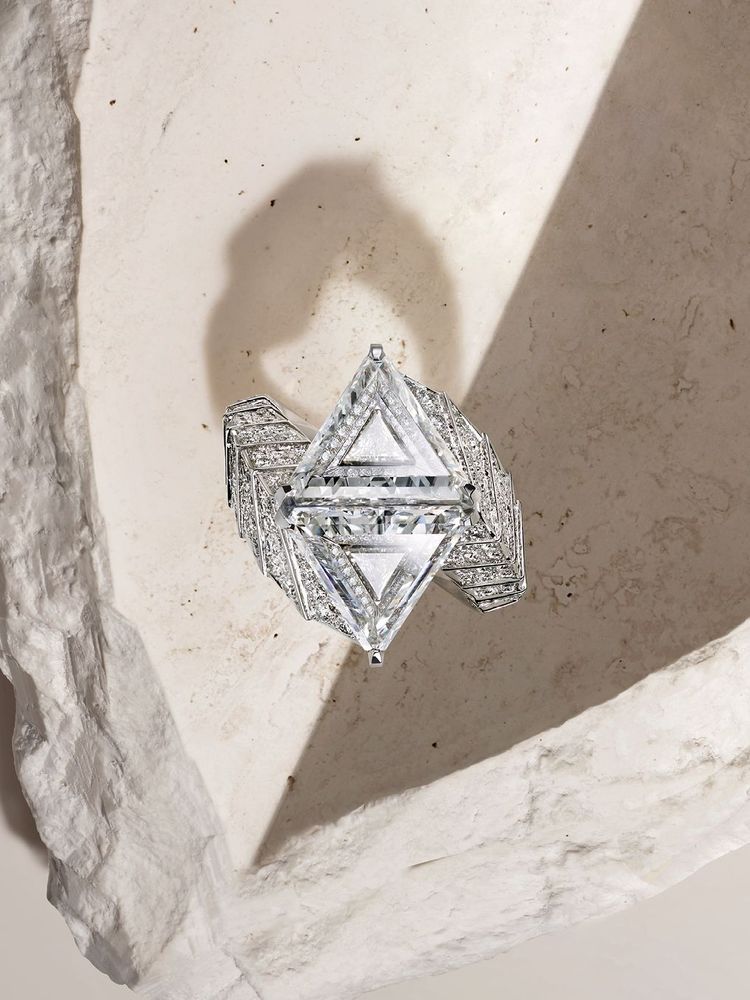 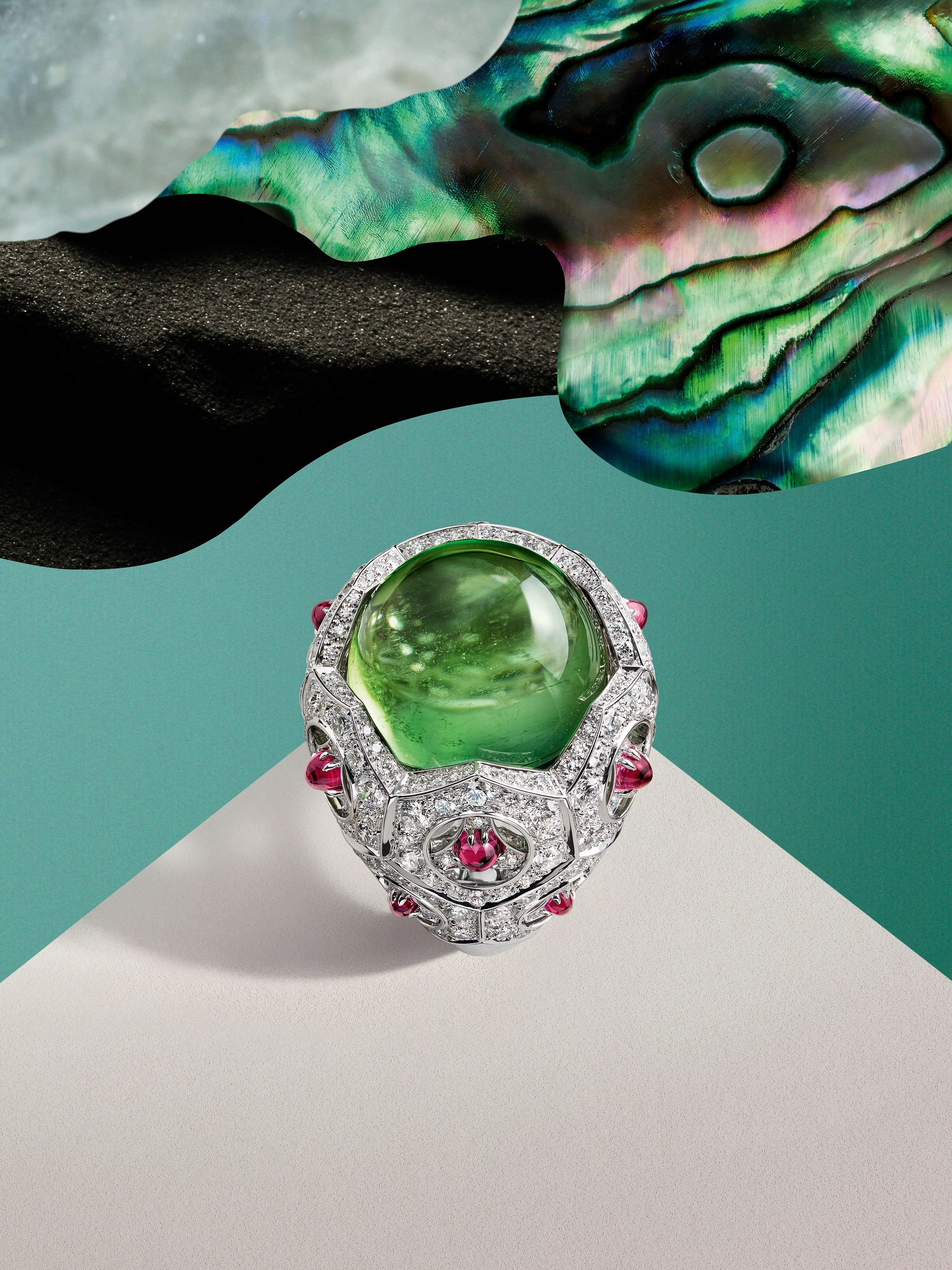 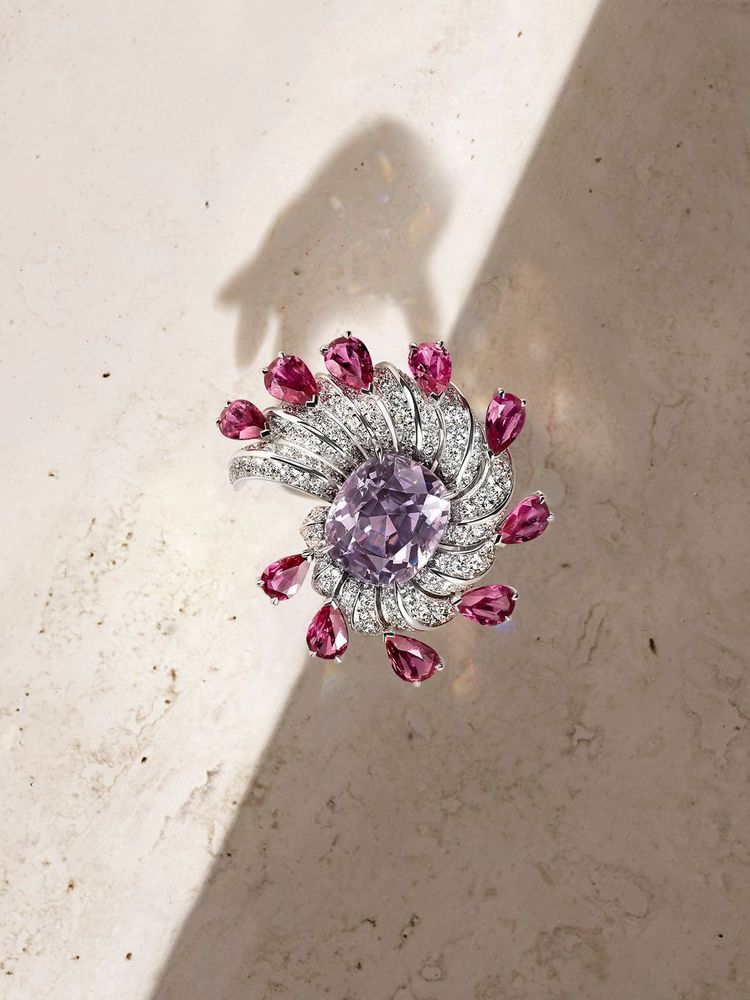