As Bitte Kai Rand celebrates the 40th anniversary of her eponymous label, she tells Vogue Scandinavia about her four decades of experience in Danish fashion

“I need to tell you about my three design gods!” exclaims Bitte Kai Rand, with a sudden burst of energy and excitement. Her role models have always been the same throughout her 40 years in the business: Yohji Yamamoto, Jean-Paul Gaultier and Dries Van Noten.

“Yamamoto is the master of the Japanese aesthetics that resonate so well with the Scandinavian mindset,” she says. “Dries van Noten is the ultimate master in mixing prints and colour, and Jean-Paul Gaultier is the enfant terrible that makes breaking the rules look chic. He’s so unpretentious.”

Although notably different, it's Bitte Kai Rand’s love contrast that unites her role models. Each of them speaks to one aspect of her own aesthetic. “Being just one thing is boring, isn’t it? Like with interiors, if it’s all antiques or all minimalist, you gloss over I,” she says.

We’re speaking as she prepares to celebrate the 40th anniversary of her eponymous label. “I don’t like those year-long celebrations. It feels pretentious. We’re doing it very straightforward. Just the single day,” she says. “I want to celebrate my employees. A lot of them have been here for ages, and we're a family.” 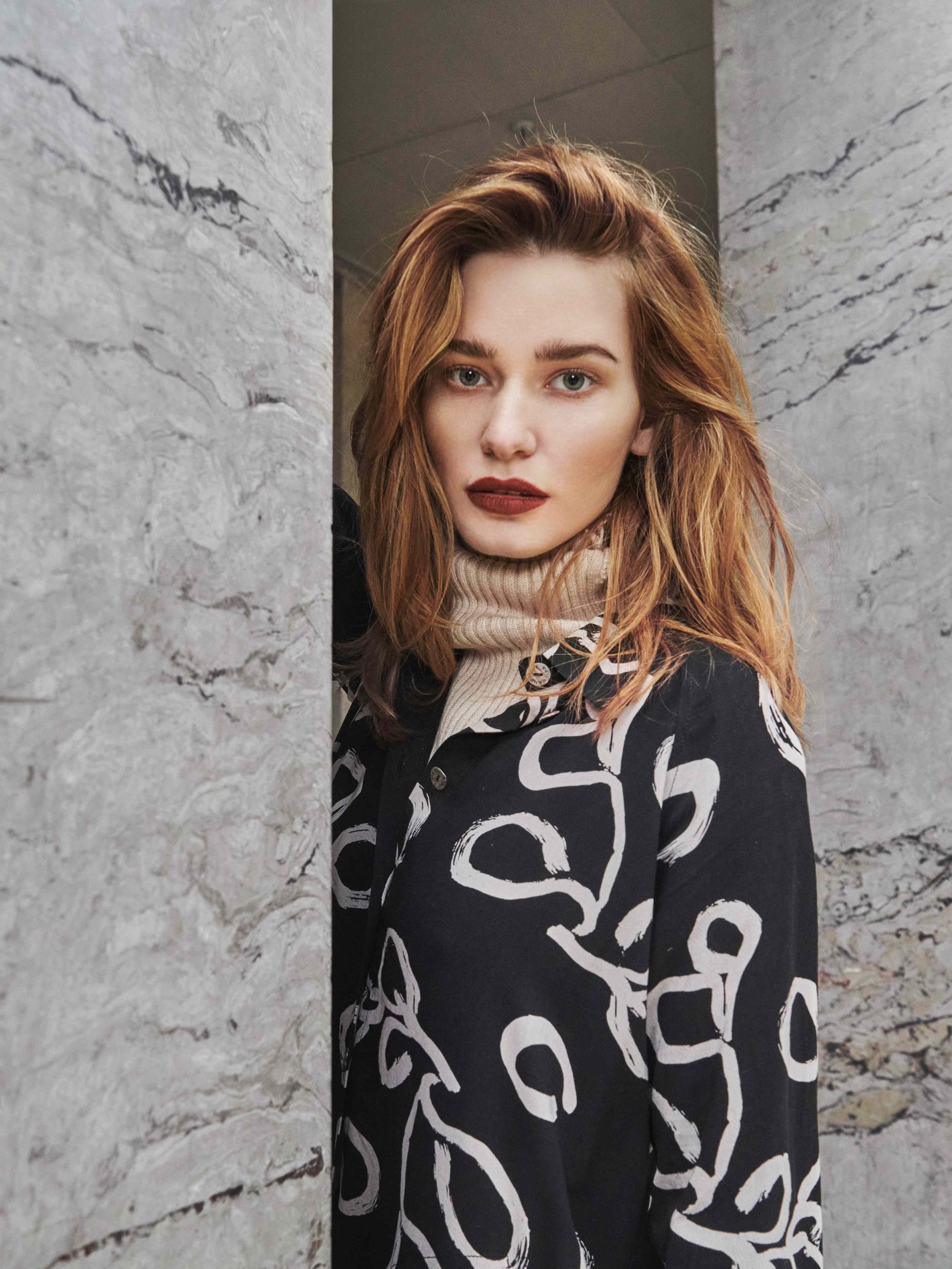 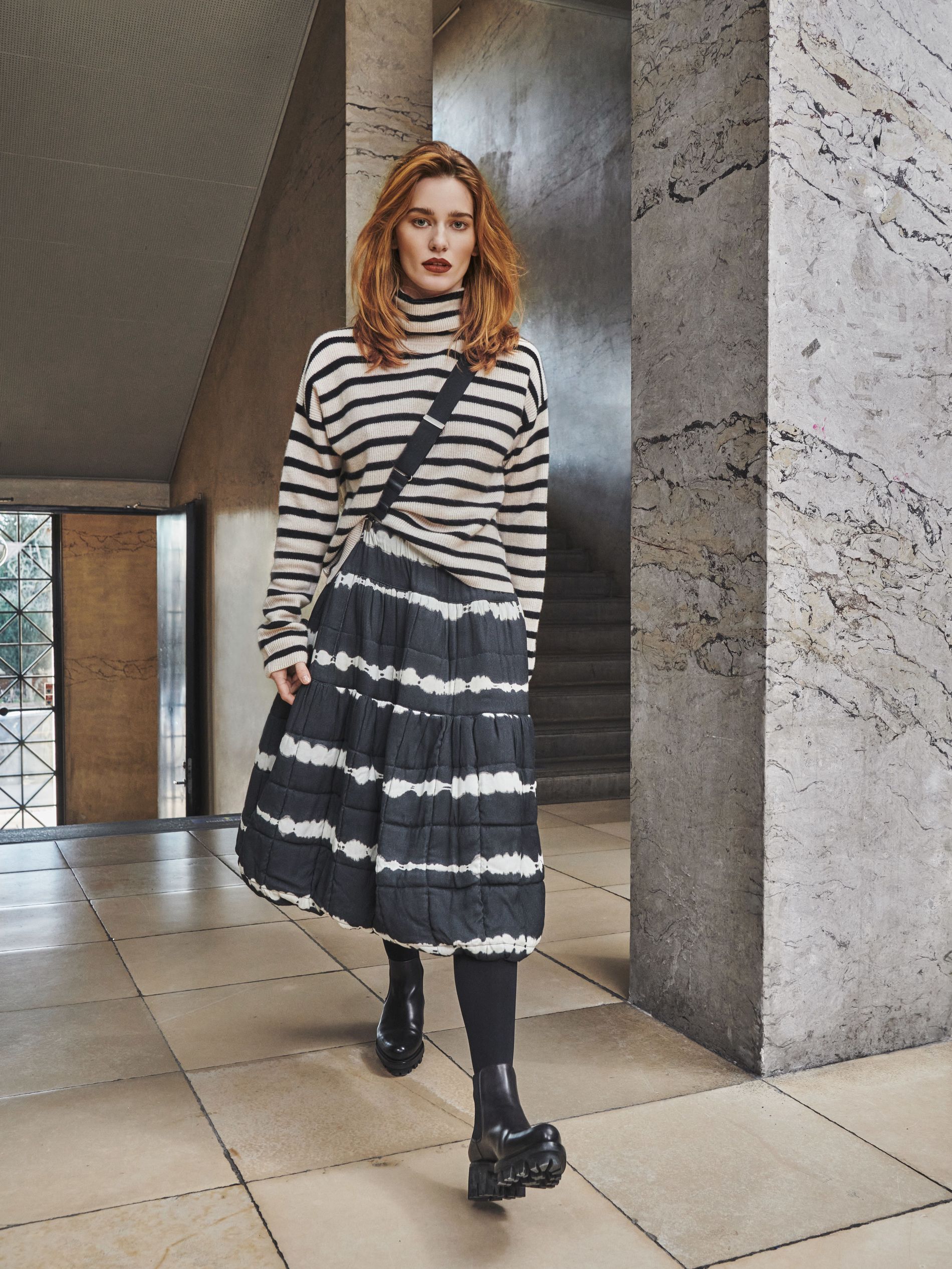 The Danish designer admits she was "never an academic", instead she was drawn to the unabashed joy of creation and design from a very early age. “When I was 10, I started drawing catwalks with all of these looks and models,” says Bitte. “From then on, I knew that it was my passion. It’s what I wanted to do,” she explains. “It became my life.” The Danish designer went on to study fashion at the Royal Danish Academy, from which she graduated with a clear vision of who she was and what she wanted to design.

Bitte first launched her brand in 1981 with knitwear, having acquired the most prolific Danish knitting workshop of the time, ‘Steen's hjemmestrikkerier’. “I knew nothing about knitwear, but the previous owner was retiring and helped me understand all of the machines and tools.” At the start, her production was entirely customisable (the customer could choose from 50 different colourways) as it was made to order. “I was drawn to knits because of the richness and the textures. The flexibility and the comfort in wearing knitwear,” she says.

I’ve always had this thought that I have to show people that I'm not stupid. That I can succeed. So I've always been a little provoked by people's lacklustre expectations of me and proving them wrong.Bitte Kai Rand 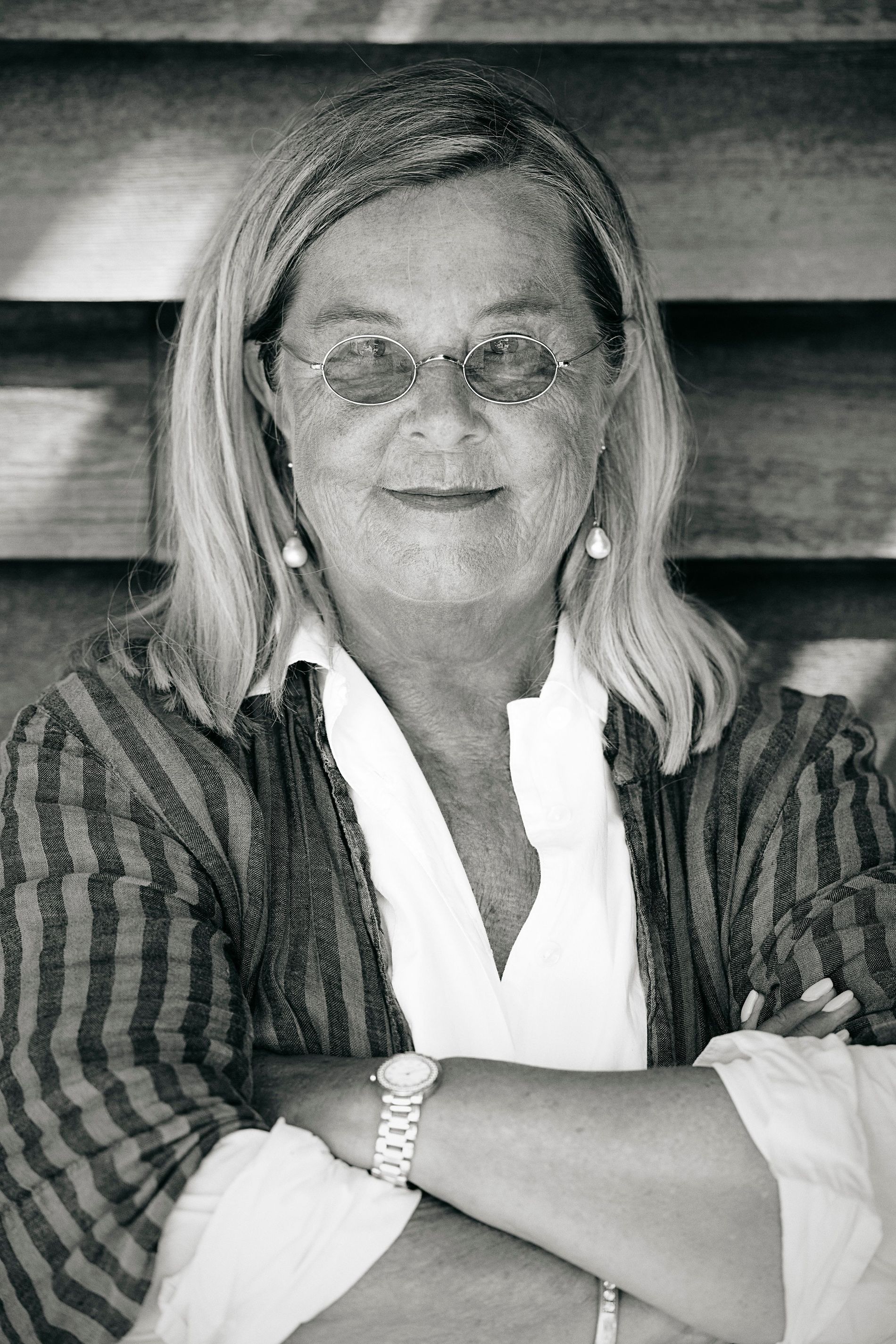 Power dressing has very much been a part of Bitte Kai Rand’s DNA from the start. At the time, her designs went beyond traditional sweaters and scarves. “I was making suits and jackets in a very fine knit as well. It was the 1980s, so it was all about broad shoulders and tailoring,” she says.

For the designer, passion has always been more important than ambition. As a matter of fact, her venture into wholesale was entirely accidental. In 1983, a retailer wanted to stock her scarves, but at the time, she didn’t have the production capacity. “ I only had the one machine to knit them, so it was impossible. So then they copied the design elsewhere.” But, she smiles, “I ended up expanding because I was provoked. If they were going to sell my scarves, they would have to get the scarves from me.” And provocation has always been a driving factor in her life. “I’ve always had this thought that I have to show people that I'm not stupid. That I can succeed. So I've always been a little provoked by people's lacklustre expectations of me and proving them wrong.”

The name Bitte Kai Rand is synonymous with voluminous shirts, sharp suits, draped jerseys, graphic prints and almost architecturally constructed outerwear – arguably, a quintessentially Danish look. However, Bitte was around long before modern brands brought the wellies-and-tulle aesthetic abroad. “That's how I would dress. When I go on a bicycle ride, I want to wear a ball gown, a sweater and rain boots. So it's always been me,” she says. Whimsical, in a word. 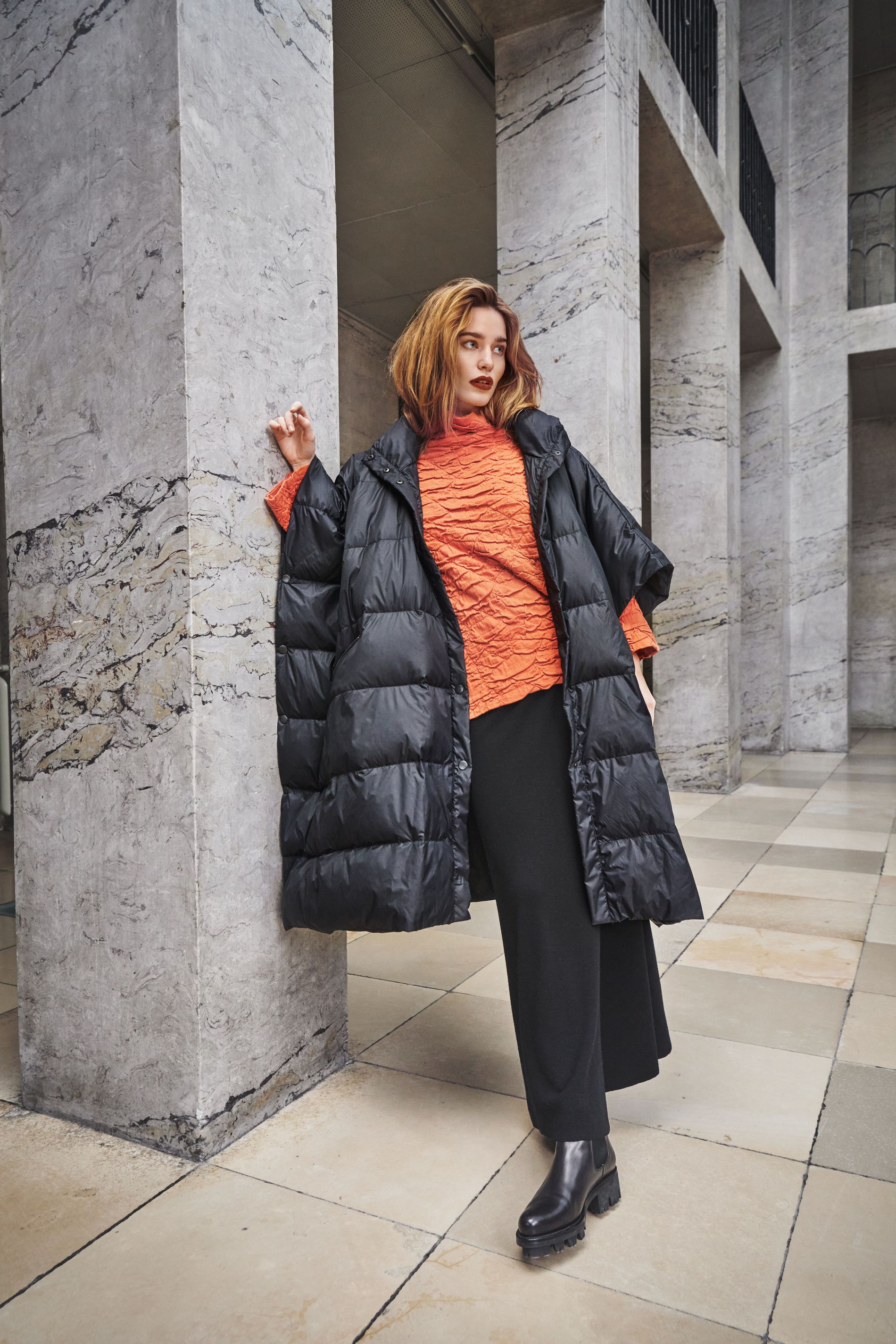 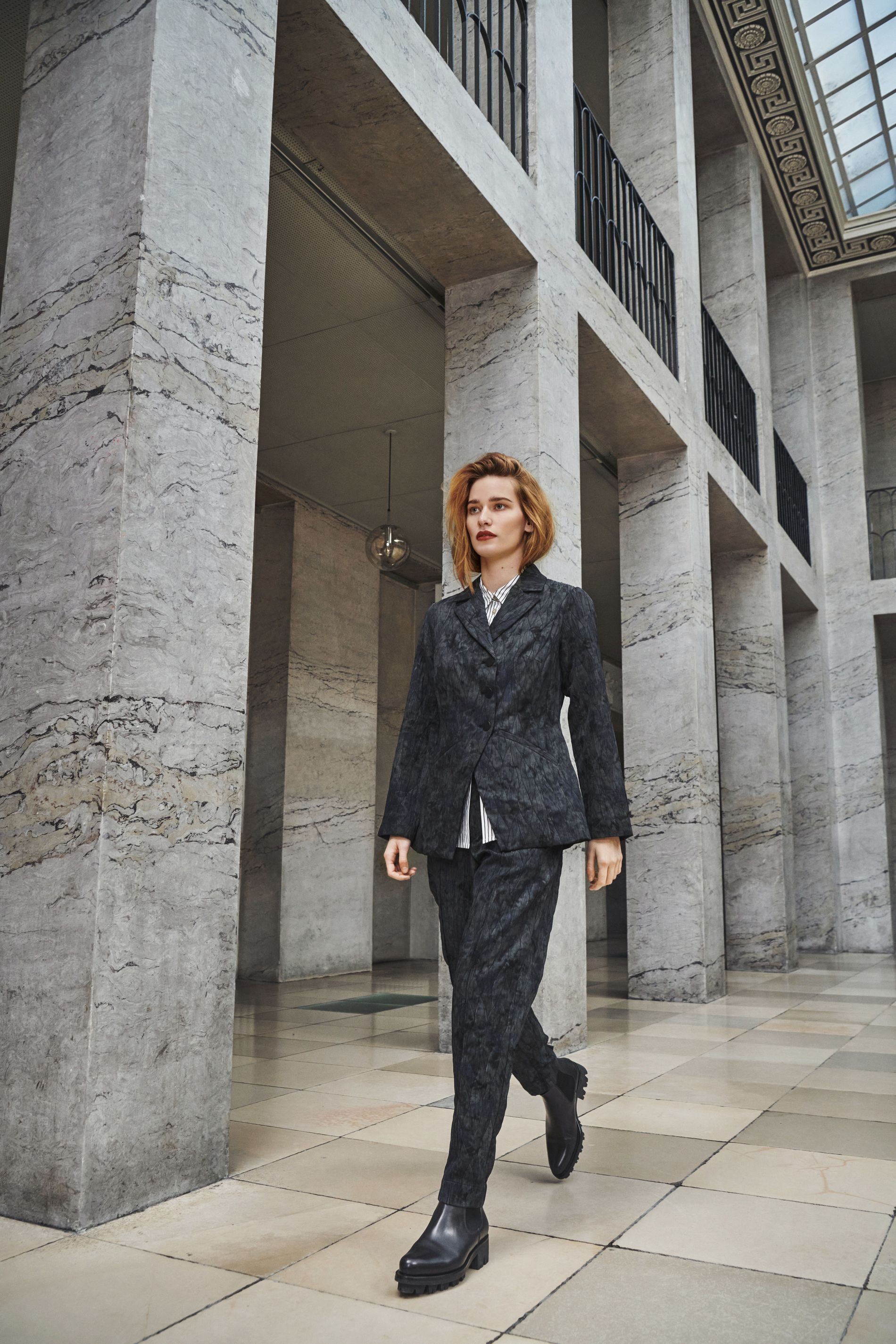 To Bitte, there must be something at stake in a look. Something that challenges your eye. A tight, minimalist jacket should be softened with a whimsical scarf, and a feminine skirt should be paired with men’s suspenders or leather brogues. It is the interplay between opposites that bring sparkles to her eyes. “I prefer the unpredictable,” she says.

While designing her anniversary collection, the designer had time to review years in fashion. “I had a moment to reflect and really think about what I am and what Bitte Kai Rand is,” she says. Eight keywords came to mind: architectural, graphic, colourful, abundant, contrasts, unpretentious, knit and garçon. Arguably missing from the list is functionality, but that is not a keyword for Bitte, it is a matter of design principle. “I've always been drawn to clothing that you can do anything in. I want to dance and bicycle and work. I don't want to be limited in how much I can move,” she says.

I've always been drawn to clothing that you can do anything in. I want to dance and bicycle and work. I don't want to be limited in how much I can move,Bitte Kai Rand

Musing on how the world of fashion has changed, Bitte tells me that she feels like she is growing younger. “When I started, it was all very strict. I was only twenty-five, and the style at the time was so serious,” she says. “Today, you’re free to dress however you want.”

As today marks her 40th anniversary, Bitte Kai Rand looks back on four fickle decades. From the sculptural shoulders of the 1980s to the designer denim and logo t-shirts of the 1990s. The play with proportions of the ‘aughts to exploring Bitte Kai Rand's aesthetics in the 2010s. The Danish designer has seen trends emerge, die and be resurrected. And through it all, she has remained steadfast to her singular style — the masculine versus the feminine, architectural versus organic, artistic prints versus the monochrome surfaces.

She has always been and will always be – unapologetically – Bitte Kai Rand.